‘Process for Venezuelans’: Illegal Entries No Longer Allowed, Entrance for a Few Only

Modeled after 'Uniting for Ukraine'

The Biden administration created a new lawful pathway to discourage Venezuelans “fleeing the humanitarian and economic crisis” from illegally entering the United States through the Southwest border. The legality of such “legal pathways” and use of humanitarian parole was covered by my colleague Elizabeth Jacobs. 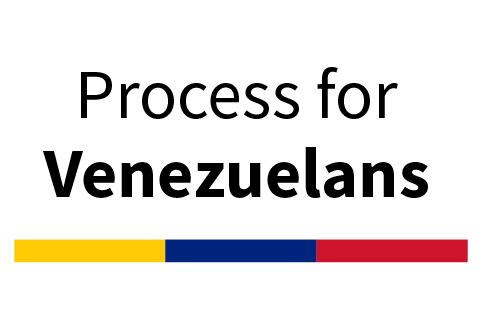 The “Process for Venezuelans” will give 24,000 Venezuelans access to the United States under parole while, supposedly, dissuading the other tens of thousands wishing to come here from crossing the southwest border illegally. Except that it is not these limited available legal spots that will discourage countless illegal entries, it is the enforcement behind it. Under this new process, Venezuelans who enter the United States illegally after October 19 will be subject to expulsion or removal.

This new process is modeled on the “Uniting for Ukraine” program designed by the Biden administration following Russia’s invasion of Ukraine to offer Ukrainians a chance to come to the United States via parole. “Uniting for Ukraine” was presented as “private”, non-taxpayer-funded sponsorships, except that the program could benefit from taxpayer money. Federal funds can also be used to sponsor Venezuelans, but, unlike its “model”, this program it is not being sold as “private sponsorship” but presented for what it is, a “Parole Process for Venezuelans”.

There are other differences between the two programs. First, Ukrainians are fleeing war while Venezuelans are being driven out by economic hardships.

Second, “Uniting for Ukraine” is open-ended, it does not have a numerical limit. Some 100,000 Ukrainians have already made it here under this program and many more will probably follow. The legal pathway for Venezuelans, on the other hand, is capped at 24,000 beneficiaries. After this cap is reached, the Department of Homeland Security (DHS) will not approve additional beneficiaries, “absent a Secretary-level decision, at the Secretary's sole discretion, to continue the process”.

Lastly, Venezuelan parolees admitted under this process will not, at least for now, receive refugee resettlement benefits. Typically, parolees are only eligible for employment authorization and Social Security numbers, but as per the Additional Ukraine Supplemental Appropriations Act, 2022 (H.R. 7691) signed by President Biden in May, Ukrainian parolees will receive federal assistance and refugee resettlement benefits, even though they're not actually refugees. For now, Venezuelan parolees will not receive additional benefits.

Following the Biden administration’s announcement of this new access to Venezuelans, the International Organization for Migration (IOM), the UN refugee agency (UNHCR), and the United Nations Children’s Fund (UNICEF) were quick to welcome this “new pathway for regular entry into the United States” while expressing their concern about “continuing restrictions on access to asylum” due to Title 42 (a Covid-19 era public health order that allows the U.S. government to stop the entry or expel noncitizens in order to prevent the spread of this communicable disease).

But why an access to asylum for Venezuelans? As the Biden administration rightly stated, the “irregular migration of Venezuelans” is due to the “economic crisis”. In fact, not once was the word “persecution” (which is the basis for asylum) used in the announcement of this new process. Oxford professor Alexander Betts was also of the view that most Venezuelans were “fleeing the economic consequences of the underlying political situations, rather than political persecution per se”.

So, if Venezuelans are not fleeing persecution but poverty and chaos, why design a program allowing them to come to the United States under parole? The answer, it seems, is to discourage them from coming here illegally. Here’s the administration’s declared objective:

But will that deterrent work? Let’s look at the numbers first.

The new pathway designed by the Biden administration will allow up to 24,000 qualifying Venezuelans to come “lawfully and safely” into the United States. As of October 19, those who enter illegally will be expelled:

Those who attempt to cross the southern border of the United States illegally will be returned to Mexico and will be ineligible for this process in the future. Those who follow the lawful process will have the opportunity to travel safely to the United States and become eligible to work here.

Over 150,000 Venezuelans were encountered along the U.S.-Mexico border in the first 11 months of FY 2022; about 34,000 were encountered in September. Let’s say 180,000 Venezuelan illegal border-crossers are expected in FY 2023. Under this new system, 24,000 Venezuelans (13 percent of that total estimate) will be allowed to come here legally, but what about the remaining 156,000 in FY 2023 alone? Will the remaining 87 percent be dissuaded from crossing illegally because of this new legal pathway available to a few? That is unlikely. Those who didn’t make it through the legal system could very well try coming here illegally. But one thing might keep them from doing so: the knowledge that they will be systematically removed if they do.

In summary, opening this new legal pathway will not reduce “the record levels of Venezuelan nationals” from seeking to illegally enter the United States; only closing the gate will.

So why create this process to begin with? It could very well be the carrot to hide the stick. To appease human rights advocates, the Biden administration could not shut the main gate to Venezuelans without opening the back door for a limited number of them.

That is not the first time the U.S. government has created legal pathways to discourage illegal entries and offer safe alternatives to dangerous journeys to the border. In 2014, the Obama administration established the Central American Minors Refugee/Parole program (CAM) to offer minors (later expanded to include adults) from El Salvador, Guatemala, and Honduras the opportunity to be considered for refugee resettlement or parole in the United States while still in the region.

The program had limited success because of the numerous conditions, time, and costs involved. But the main reason behind CAM’s failure to take off was the lack of enforcement behind it. CAM was not a deterrent to illegal crossings because these crossings were still allowed; and, for most Central American immigrants, it made no sense to use the back door, especially when the front one was wide open.

Moreover, both programs are fast, easy to use (mostly online filing), and present no real financial drain on U.S.-based sponsors who can refer to humanitarian organizations (and federal funds) for backup if necessary.

Some 100,000 Ukrainians already made it to the United States under “Uniting to Ukraine”, many more are expected. For Venezuelans, 7,500 applications were already being processed under this new system and 100 Venezuelans were approved to fly to the United States. The number of Venezuelan illegal border-crossers from Mexico went down from 1,200 daily to 150.

The expected 24,000 cap under this new “process for Venezuelans” should be reached quickly. What next? Will the enforcement part keep being applied beyond that cap? Will the DHS secretary approve additional beneficiaries and extend this process in the future? But also, what will happen when Title 42 is lifted altogether?

This new process is procedurally similar to “Uniting for Ukraine”, a program created by the Biden administration in April 2022 to allow Ukrainians to come to the United States straight from Europe for an initial period of two years under humanitarian parole.

The sponsorship process for Venezuelans provides a pathway for certain Venezuelans and their immediate family members to come to the United States under parole (for a period of two years) and apply for employment authorization, provided U.S.-based supporters (sponsors) agree to provide them with financial support during their stay here. This process must be initiated by the U.S.-based supporter; Venezuelan beneficiaries cannot directly apply for parole under this program.

This two-year period will allow Venezuelans to “seek humanitarian relief or other immigration benefits for which they may be eligible, and to work and contribute to the U.S. economy as they do so.” However, as stated by the Biden administration, if after two years, they are not granted asylum or other immigration benefits, “they will need to leave the United States at the expiration of their authorized period of parole or will generally be placed in removal proceedings after the period of parole expires.”

A “U.S.-based supporter” need not be a U.S. national, citizen, or lawful permanent resident (green card holder); other individuals lawfully present in the United States can also sponsor Venezuelans under this new process. Examples of individuals who meet the supporter requirement include:

A “beneficiary” is a Venezuelan national (or their immediate family member) who is outside the United States and who may be considered for parole under this process.

Immediate family members in this process include:

To be considered for parole under this process, a beneficiary must:

Unlike refugees admitted under the refugee resettlement system, Venezuelan beneficiaries need to provide for their own commercial travel to a U.S. airport and final U.S. destination.

To serve as a supporter, an individual or individual representing an entity must:

Supporters can be individuals filing independently, filing with other individuals, or representing an entity.

Even though only one U.S.-based supporter can complete and file online Form I-134 (Declaration of Financial Support) on behalf of one beneficiary, multiple supporters (including representatives from various human rights and refugee advocate organizations) can agree to support one beneficiary to facilitate approval. So, financial support can come from organizations such as refugee resettlement agencies that are, in turn, mostly funded by U.S. government contracts. In the end, U.S. tax dollars that go to resettlement contractors can in turn be used as additional support in the Declaration of Financial Support form submitted to admit a Venezuelan into the United States.

Individuals who are filing in association with an organization, business, or other entity do not need to submit their personal financial information, if the level of support demonstrated by the entity is sufficient to support the beneficiary.

The supporter commits to providing financial assistance for the beneficiary, as well as other forms of assistance, including:

NGOs may be able to help potential supporters and beneficiaries to prepare for this process. The Department of State collaborates with Welcome.us “to provide the public with information on welcoming and supporting newcomer populations.”