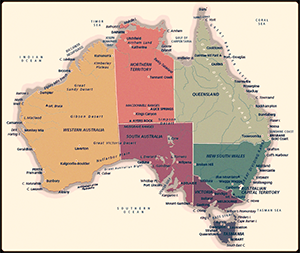 The latest development in the Australia-U.S. refugee deal is the unexpected departure of DHS interviewers from Nauru on July 14, two weeks ahead of their scheduled departure. (Nauru is where one of Australia's two offshore detention centers is located.) US Citizenship and Immigration Services did not elaborate on this change in schedule but did state they were planning return trips to the island to resume their screening interviews with refugees, in preparation for their resettlement in the U.S.

This comes following the U.S. government announcement on July 13 that the 50,000 refugee-cap for FY 2017 had been reached.

The Australian Minister for Foreign Affairs, Julie Bishop, dismissed renewed doubts about the refugee deal: "The United States is upholding the agreement. We have been given assurances by President Trump and Vice-President Pence and others, that the agreement will be adhered to." She added: "The United States, like Australia, has a quota each year for the refugee intake. I understand that the quota has been fulfilled for this year. It kicks over again on October 1. But I have no doubt that the agreement is progressing." Oct. 1 is when the new U.S. fiscal year – and thus a new refugee-resettlement quota – begins.

The Trump administration's 90-day "travel ban" – which took effect June 29 – ends around the beginning of October as well, which is relevant because most of the people in detention are from countries covered by the ban. True, the 120-day pause in the refugee resettlement program ordered by President Trump will last an additional month, but Australia's unwanted refugees are not affected by it anyway

Despite the suspension of interviews, there is plenty of time for Australia's refugees detained on Nauru and on Manus Island (some 1,000 people) to be resettled in the U.S. by the end of October, when the detention centers there are scheduled to be shut down. (The company contracted to provide services in both centers will not be renewing its contract with the Australian government beyond October).

We can only guess why the sudden halt in refugee processing on Nauru. In any case, in view of the controversy (and litigation) surrounding the "travel ban", the Trump administration is wise to pause the resettlement process of Australia's refugees detained in offshore processing centers as well.

So the window of opportunity for resettling Australia’s unwanted refugees opens at the beginning of October, with the termination of the "travel ban" and start of FY 2018, and closes at the end of that month when all refugees will have to be out of the island detention centers.

So, rendez-vous this October.