Andrew R. Arthur is a resident fellow in law and policy at the Center for Immigration Studies. 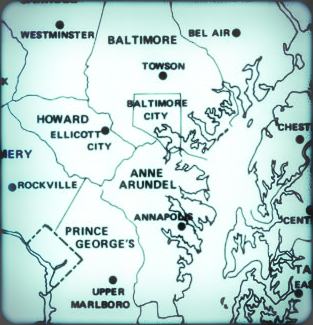 Maryland largely consists of two large cities (Baltimore and Washington, D.C., the latter geographically attached, but politically separate), surrounded by a series of bedroom communities, suburbs, and exurbs. Two of Baltimore's suburban counties, Baltimore County and Anne Arundel County, each faced a decision on section 287(g) of the Immigration and Nationality Act (INA), which facilitates cooperation between local law enforcement and federal immigration authorities. Each took a different path, and that will likely make a big difference as each faces, or is soon to face, the prospect of alien gang incursion.

Each county's position on 287(g) was a major news story. Under both Anne Arundel's and Baltimore County's proposed plans, correctional officers would have screened inmates for immigration violations, in conjunction with Immigration and Customs Enforcement (ICE). As the Baltimore Sun reported, with respect to Baltimore County Council Bill 32-17:

A bill to enlist the Baltimore County jail into a federal immigration screening program drew divided views from residents Tuesday [, May 30, 2017] — the latest local take on an issue that has sparked debate in communities across the nation.

At a hearing that lasted nearly two hours — and was preceded by an opposition rally attended by County Executive Kevin Kamenetz — residents lined up to either support the bill as a way to help root out illegal immigrants who are committing crimes, or reject it as a program that sows fear among otherwise law-abiding people.

Baltimore County's bill was eventually "tabled", that is, "effectively killed", in a June vote of 5-2 when one of the Republican cosponsors withdrew his support. As the Sun reported, that member "said he grew to have some reservations about the bill. He drafted amendments that would have made participation in the program a pilot for a limited amount of time, limited it to only screening convicted felons, and required an audit."

The Anne Arundel county executive, on the other hand, entered into a 287(g) agreement that same month, as the Capital Gazette reported at the time. As that paper reported in August, when the first correctional officers began receiving training:

County Executive Steve Schuh faced vocal opposition from county residents and immigrant advocacy groups, who worry the decision will heighten fear in immigrant communities and strain their relationships with law enforcement. Some council members questioned whether the agreement could lead to unanticipated costs for the county.

The foresight of Anne Arundel County's actions became apparent in the past few weeks. On October 6, 2017, the Anne Arundel police chief reported that three bodies had been discovered in the county, that the deaths were "gang-related", and that "multiple suspects have been arrested in the deaths." This follows the arrests of two members of MS-13 last year, who were charged in connection with the beating of a student at Annapolis High School, and reports that "another nine members are facing charges in two separate stabbings."

As the Anne Arundel county executive described the criminal activities in the county: "These gangs are terrorizing some local communities here in Anne Arundel County acting almost like local police enforcers. Threatening residents and committing brutal acts too unspeakable to detail here."

The Anne Arundel county police chief was cryptically vague in his description of the three deaths, asserting in a press conference: "The reason I'm so hesitant to answer questions up here, guys, is because I'm afraid I'm going to put another person in jeopardy." No description was given of those arrested, and in particular, the immigration status of those arrested was not disclosed.

That said, the Washington Post reported in March that: "Federal prosecutors also recently secured racketeering charges against Jose Augustin Salmeron-Larios, 24, of Anne Arundel County, accusing him of running MS-13's 'El programa de Maryland,' or the Maryland Program, that allegedly coordinated operations among cliques." In the press release announcing that and other indictments, the U.S. Attorney's Office for the District of Maryland stated:

MS-13 is a national and international gang composed primarily of immigrants or descendants from El Salvador. Branches or "cliques" of MS-13, one of the largest street gangs in the United States, operate throughout Prince George's County and Montgomery County, Maryland. MS-13 cliques often work together cooperatively to engage in criminal activity and to assist one another in avoiding detection by law enforcement. ... To protect the gang and to enhance its reputation, MS-13 members and associates are expected to use any means necessary to force respect from those who show disrespect, including acts of intimidation and violence. MS-13's creed is based on one of its mottos, "Mata, roba, viola, controlla," which translates to, "kill, steal, rape, control."

The gang in Montgomery County went through years of relative quiet until about two years ago. Leaders in El Salvador, facing a crackdown by police in their own country, began sending instructions and members north to Metro Washington, with orders to increase the gang's power, make money through extortion and drug dealing, and send some proceeds to El Salvador.

It is possible that none of those sought or arrested in connection with gang violence in Anne Arundel County are aliens. Given these facts, however, that would appear to be doubtful. As my colleague Mark Krikorian recently explained, MS-13 has been reinvigorated by a flow of "unaccompanied alien children" (UACs) who took advantage of lax Obama administration policies to enter the United States.

Criminals rarely began their careers by committing murder, and this is probably as true of gang members as it is of other common criminals. Press reports from the National Capital area, quoting Montgomery County State's Attorney John McCarthy, explained that in that area:

"A lot of these kids are (performing) below grade level. They're so far below grade level, they probably shouldn't be in high school. But they come here 16, 17, 18 years old and they may be functioning at a fourth or fifth grade level educationally," said McCarthy.

MS-13 recruiters target the vulnerable students in these classes.

"Well the gangbangers know that these kids have been clustered in those classrooms for these classes. Well it's almost like we've brought them together in a fishbowl," said McCarthy. He describes the need for more community support for these students, so they may be prevented from falling into the gang.

Identifying alien criminal gang members early in the criminal justice system and turning them over to ICE for removal is the most effective way to ensure that those aliens do not commit more serious offenses, with more dire consequences, down the road.

Thus far, Baltimore County has been spared the sort of gang violence that has been seen in the Washington, D.C., suburbs during the most recent spate of violence. As noted, the gang has operated actively for a couple of years in Montgomery and Prince George's counties (and Suburban Virginia), the two Maryland counties that directly border of the District of Columbia. With respect to those jurisdictions, press reports state:

MS-13 or Mara Salvatrucha has roots in El Salvador and a network stretching across the US and Latin America. Montgomery County, Md., has experienced about 16 gang-related homicides in the last two years, according to ... McCarthy.

The reports of MS-13 activity out of Anne Arundel County show that the gang is increasing its reach north. It is just a matter of time, then, before Baltimore City and Baltimore County are exposed to the violence that their southern neighbors are facing.

In fact, MS-13 did have a presence in the Baltimore area a decade ago before a federal crackdown sent several of its local leaders to jail. Today, gang graffiti has been spotted as far north as Bel Air in Harford County, which sits to the northeast of both Baltimore and Anne Arundel counties.

Notably, Baltimore County has a population of immigrant students similar to the ones who State's Attorney McCarthy described as being targeted in the Montgomery County school system for gang recruitment. As the Baltimore Sun reports, the county's "school system added more than 800 new English learners to its student rolls between October 2015 and 2016. Most of the influx of new students were refugees, undocumented immigrants from Central America, and native born children from families that speak only Spanish at home." Protecting those students should have been of paramount importance to the Baltimore County Council; ironically, however, in an attempt to "protect" immigrant communities, it ran the risk of exposing those students to the same criminal predations that their neighbors to the south must endure.