What Do the EB-5 and the old Bracero Program Have in Common? 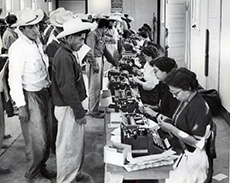 What do the EB-5 (immigrant investor) and the Bracero programs have in common, besides the “B” in their names?

First a little history. The Bracero program was a temporary, World War II nonimmigrant program to bring Mexican males (only males) to the U.S. to work on America’s farms during the conflict. It was not used much in wartime, but in the following years it was seized upon by agribusiness in the West as a source of docile, inexpensive, numerous, and legal alien workers. Bracero means, approximately, in Spanish “the strong-armed one”. The program was, in its later years, a controversial one, as it shouldered aside U.S. farm workers and lowered wages in much of agriculture.

The EB-5 program came along about half a century later; it provided a public good, a route to green card status for alien families who invested a minimum of $500,000 (later raised to $900,00) in a Homeland Security-approved, but not guaranteed, private-sector project, thus fattening the wallets of a number of U.S. real estate developers, mostly in big cities. The letters EB stand for “employment-based” preferences in the immigration system; EB-5 is the fifth of these. The program also facilitated much corruption and often heavy losses for many of the alien investors.

Whereas the Bracero program involved only Mexican nationals, the EB-5 program has traditionally been dominated by rich (but nervous) Chinese.

While no one has discussed the Bracero program in decades, the EB-5 program has been in the news recently because the congressional authorization for the main part of it expired on June 30.

So what do the two of them have in common? One dealt only with the countryside and agriculture, while the other was about 98 percent urban in its location. One dealt with Mexicans and the other primarily with Chinese.

There are two common threads here, one economic, the other legislative.

Both programs dealt with the long-time successful efforts of a tiny fragment of the economy to make use of the immigration process to enhance their own financial positions; the Bracero program was not used by mainstream farmers in the corn, wheat, and dairy business, it was used almost exclusively in the fruit and vegetable business, which tends to be large in scale. Similarly, the role of the EB-5 program was almost exclusively to help big-city real estate developers, usually with big projects in glitzy urban areas, such as Manhattan’s Hudson Yards.

The other big similarity was the temporary nature of the congressional authorization; the Bracero program was passed by Congress in 1943 as one of a series of short-term, war-time-only measures. It was often extended.

The main component of EB-5, the pooling of individual aliens’ investments, a pilot program, initially, also was authorized for temporary periods, often extended.

I was in JFK’s Labor Department as a junior political appointee in the early 1960s when the Bracero program was still quite active, but under heavy fire from organized labor and the Catholic Church. Its supporters kept keeping the program alive, but with dwindling majorities in Congress. I remember complaining to the then-Secretary of Labor, the late W. Willard Wirtz, when JFK reluctantly signed a bill calling for the program’s extension in, I think, 1963.

The struggle to keep the program alive, against consistently heavier odds, finally was too much for agribusiness. They gave up the fight, and the program finally lapsed on the last day of 1964.

Maybe the same thing is happening to the EB-5 program.

The author spent the years 1965 and 1966 as assistant to the secretary of Labor for farm labor, as the Johnson administration sought to undo the damage of the then-lapsed Bracero program.