The Trump Administration, after thinking about it for two and a half years, has published new regulations for the scandal-plagued immigrant-investor (EB-5) program. A new set of regs on the subject had been proposed by the Obama Administration as it left office. It is not immediately clear how much these new 200+ page regulations reflect those proposed in January 2017.

What is clear is that at least two very positive steps have been taken, another variable will take more analysis, and that two other potential areas for major reform have been ignored. It looks like this:

There is another good sign. Senator Chuck Grassley (R-IA), a determined supporter of EB-5 reform, thinks well of the new document, as this press release shows.

The announcement, on July 23, by the United States Immigration and Citizenship Services, along with a link to the regulations themselves, can be seen here.

Let's look at these issues in turn.

Minimum Investment. Most EB-5 visas, about 98%, go to investors who put $500,000 into pooled investments handled by regional centers (DHS-approved middlemen entities). This amount has not been changed for more than a quarter of a century, and most other nations' visas-for-sale programs demand higher to much higher investments. A tiny minority of the EB-5 visas go to aliens who will not only invest money, they will run the business they had invested in; the minimum for that had been $1 million and will now go to $1.8 million.

For reasons I cannot imagine—unless there is a lure in larger dollar figures—the USCIS press release talks about the tiny $1 million or $1.8 million program before it mentions the mainstream half million program.

Moving up the dollar figure, something resisted by the industry for reasons not clear to me, is a clear-cut step in the right direction.

Who judges the TEA maps? Currently many TEAs are gerrymandered by linking together high unemployment areas with the (usually) low-unemployment location of the investment; in one case in Texas the string of census districts reached more than 200 miles. I showed a few years ago that you could regard the White House, the National Mall and the Capitol Hill neighborhood as a low unemployment area for EB-5 purposes if you manipulated the map with a little imagination. 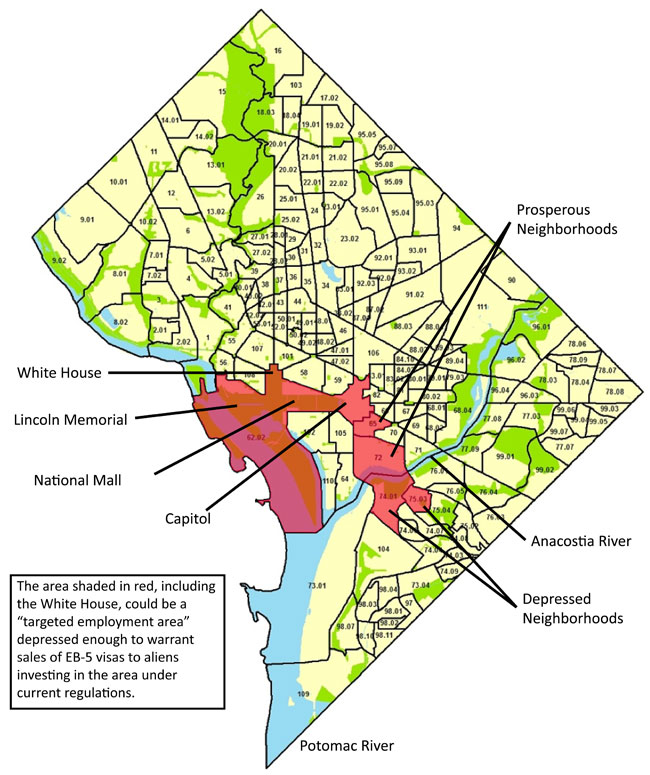 Currently state governments are supposed to rule on the appropriateness of these TEA maps. I have been writing about this subject for at least seven years, and I never once heard of a state government vetoing one of these maps. In every case, the state has the choice: shall these millions go to our state, or to someone else. Not unexpectedly, they always ruled in favor of themselves.

Under the new regulations USCIS, not the states, will determine if the TEAs are appropriate, a good thing.

How are the TEAs to be defined? This is a complex process and occupies many of the pages in the new rules; I will review them and write a posting about them later. I hope that the new rules are at least somewhat better than the old ones.

Perhaps a Missed Opportunity. One of the major problems with this program is the ease with which U.S. operators cheat alien investors (see my recent posting on how one EB-5 fraudster had a $30.2 million waterfront mansion in Palm Beach as a result of his cons). I could not see any mention of this variable in either the USCIS press release nor in the table of contents for the regulations. Perhaps on a careful reading I will find something on this matter

Surely a Missed Opportunity. One of the problems with the program is that many investors (mostly from China) have put their money into the EB-5 program but the promised green card will not arrive for years and years. I have proposed a scheme which:

All of this was based on raising the minimum investment. Instead the new rules just gives industry more money in investments, and do not demand in return any of the benefits of my (perhaps far-fetched) scheme, which, among other things, calls for reducing the number of new EB-5 visas issued until we can take care of the backlog.

My proposal would get rid of the backlog without either increasing or decreasing the level of immigration to this country; other-backlog removal proposals routinely increase migration to the United States.

The new regulations—this is not a proposal, this is the real thing—offer some clear advantages over the old ones, and will be explored in greater detail in a subsequent posting or postings.