Two marginal universities, each with large numbers of foreign students on F-1 visas, are facing threats of termination in the near future, and one of the two already has announced the impending closure of three of its seven U.S. campuses.

The Department of Homeland Security – that's the agency that could decide whether colleges may admit foreign students or not – has had nothing to do with any of this, which is, sadly, the norm.

The two in trouble are the multi-campus Stratford University, and the single campus (and single building) Virginia International University; both are headquartered in Northern Virginia. Both had accreditations from an entity, the Accrediting Council for Independent Colleges and Schools (ACICS), an organization which was de-recognized by the Obama Administration as having too lax standards, and then was revived by Secretary of Education Betsy DeVos, who has a different set of standards. But the associated nearly two years of uncertainty had an adverse impact on the ability of the two universities to attract foreign students.

Stratford has been a private, for-profit operation for many years; in 2015 it converted to a public benefit corporation. (I do not know what the change signifies beyond securing a more attractive label.) It is owned, privately, by the mysterious American Transportation Inc.

VIU is one of two universities linked to the conservative Muslim cult dominated by Fethullah Gulen, a self-exiled Turkish cleric, now living in rural Pennsylvania, The Gulen movement is better known for its numerous tax-supported charter schools than for its links with the VIU, and another university in Texas. VIU and Stratford have no known connections with each other.

Both Stratford and VIU not only have a high proportion of foreign students (though this percentage has declined with VIU lately), they both took full advantage, early on, of the Optional Practical Training program for subsidizing the wages of alien graduates of U.S. colleges and universities. OPT grads, for either one year or three (depending on their field of study), do not have to pay into the usual payroll taxes (nor do their employers), giving them a marked advantage over citizen and green card grads, who (along with their employers) have to pay the full freight of Medicare and Social Security taxes. Those in the STEM field get this unusual tax break for three years.

At one point, in 2011, Stratford, as noted in the previous link, had 737 of its graduates in the OPT program, which was then twice the number of OPT workers from all eight of the Ivy League schools. As recently as 2017, according to DHS statistics, VIU had 965 alumni in the OPT program, making it the 87th largest institution in this field, and ranking ahead of such well-known places as Yale and Southern Methodist.

Of the two, Stratford is probably in a better position to survive than VIU; this is the case because Stratford, due to a special law passed years ago by the Virginia state legislature, is not regulated at all by the Commonwealth government, which is not true for VIU. Both are regulated by ACICS, however, and either the state agency or ACICS can effectively, close a college. So VIU has two opportunities for closure (as we reported recently) and Stratford has only one.

Stratford, without mentioning ACICS, announced this month that it had closed its Newport News, Va., campus, and would shut down its operations this fall in Virginia Beach and in Glen Allen, a Richmond suburb. It plans to continue in Falls Church, its main operation in that D.C. suburb, as well as in Alexandria and Woodbridge, Virginia, and in Baltimore.

Stratford had not done well during the last set of ACICS visits; the latter had examined 107 areas of the university's operation, and found: "... of which 74 have not been satisfactorily addressed."

In percentage terms that means that Stratford had passed 31 percent of ACICS's tests, and failed 69 percent of them – hardly a Gentlemen's C.

On May 3 ACICS sent a very detailed, 35-page letter to Dr. David Brand, Interim Campus President of the Falls Church campus, full of documented instances of unsatisfactory behavior. Crucial data of one kind or another was either not kept or was not documented. In one particularly specific instance, ACICS wrote:

The campus (Falls Church) responded by providing a resume, job description, and offer of employment to a new campus president [name redacted]. However, there was no evidence to support [name redacted] had accepted the position . . .

Was the name redacted that of the recipient of the letter?

About halfway through this long letter, we find that,

The Council acted to vacate the show-cause directive for data integrity, [relating to its one overseas campus, in south India] but determined that the institution is not in compliance with the Accreditation Criteria. Therefore, the Council acted to place the institution on compliance warning, continue the current grant of accreditation through December 31, 2019, and require the following information prior to its August 2019 meeting . . .

There follows about 15 pages of single-space text listing all the things that ACICS thinks should be done.

Perhaps ACICS will downplay all the evidence it has presented, as it has ignored similar failings of other institutions in the past, which is why the U.S. Department of Education had dinged it in the first place. Or perhaps this time, with either Stratford (or VIU), ACICS will show some grit and terminate the institution or institutions.

Not only is VIU facing two certifying agencies rather than one, it is one of those agencies really investigates the schools it oversees. This is the State Council of Higher Education for Virginia. SCHEV does not just look at official school documentation, which seems to be ACICS' main activity; it also reads the texts of exam papers for, among other things, plagiarism and the grades received by those who plagiarize, as we noted in an earlier posting linked above.

Further, since VIU is regarded by IRS as a 501(c)3 charity, it has to file annual financial reports, the form 990, and these are public documents; Stratford does not need to do that. Given the existence of both enrollment data (from ACICS) and financial information (from the 990s) we are able to show graphically the rise and remarkable fall of VIU, in terms of number of students and gross income. 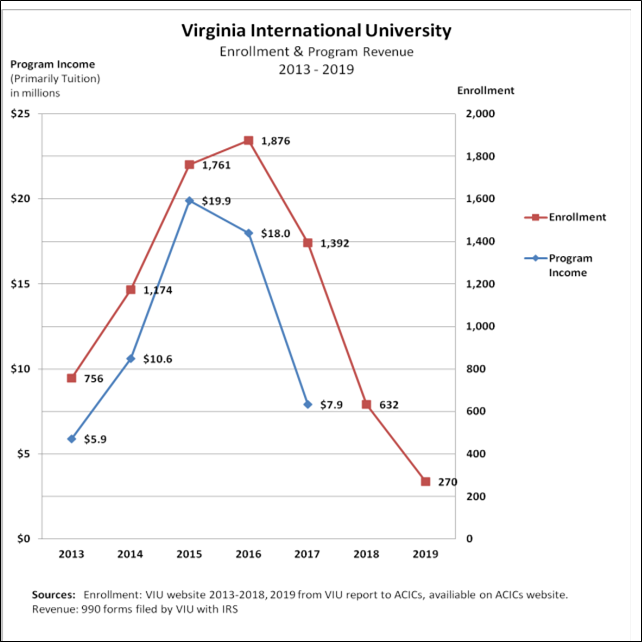 Another visual image of the decline of VIU can be found – though this takes more time – in the video of its most recent, and sad, little graduation ceremony. I counted 85 people crossing the stage, virtually all with master's degrees. With the master's courses usually taking two years, this would suggest a student body of, say, two and a half to three times that size, or in the 200-250 range, which is close to the last reported student body size of 270. All of this is a real come-down for an institution that once had more than 1,800 students.

My understanding of the timing of the decision-making is that on May 29 there was scheduled to be an "open hearing", a formal session involving SCHEV and VIU in which VIU gets a chance to refute the previously announced staff findings, but the public is not involved.

After this session, a senior member of the SCHEV staff, the Director of Academic Affairs and Planning, Dr. Joseph G. DeFilippo, has 60 days to recommend the closure, or the non-closure of the university. If he decides against termination, that is the end of the process. If he recommends it, the full Council will vote on it at its next session.

Meanwhile, ACICS had issued a show-cause order to VIU regarding its continuing existence based, it appears, on the evidence provided by SCHEV. On May 28, ACICS essentially punted, writing this to VIU:

Therefore, given the continued uncertainty of the institution's authorization to operate by SCHEV, as well as the hiatus of its distance education program, the Council acted to continue the show-cause directive for subsequent review at its August 2019 meeting.

There had been criticisms of VIU's distance learning program, so it had dropped that operation, at least temporarily. ACICS had the opportunity to make a hard decision on VIU, but decided not to do so.

As noted earlier, DHS, which in previous years had closed marginal institutions preying on foreign students, has taken no visible role in any of these processes.

A Successful Visa Mill, by One Standard, Is Three Times Richer than Harvard

More on an Embattled, Turkish-Owned University for F-1 Visa Holders