Too Few Visas or Too Generous Qualifications? — EB-5 and the Ombudsman 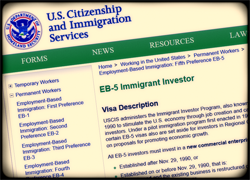 What do you do when demand routinely exceeds supply?

If you are dealing with an immigration issue, the conversation is almost totally dominated by the open-borders types and their journalistic allies who discuss the "need" for more visas in, for instance, the EB-5 program, which gives a fistful of visas to every alien who chips in a $500,000 investment through a DHS-recognized regional center.

There are backlogs of thousands in the program, particularly for those from China, whence come most EB-5 investors. The usual pitch is that the supply of visas needs to be increased. The current level is about 10,000 new ones each year.

Let's look at the other, totally neglected side of the coin. Instead of increasing the supply — and challenging the 96-year-old tradition of numerically limiting some parts of our million-aliens-a-year migration program — let's look at the demand side of the equation. What can we do to ease the backlog by making it harder to file for one of these visas?

I should note that visa backlogs are a totally American problem. Virtually all other nations decide on an application, accepting or rejecting it, with no backlogs. Only in America do we decide to approve an application and then tell the applicant to wait months or years or decades for the approved application to be honored. The presence of backlogs always gives the anti-restrictionists an argument to expand migration.

I was reminded of this matter when I read the announcement for yesterday's teleconference of the USCIS Office of the Ombudsman, with this item being one of those on the agenda:

The continuing demand for Immigrant Investor (EB-5) visas: a series of short-term extensions triggered filing surges, leading to visa queues of 10 years or longer for investors and their dependents from China.

Setting aside the presumably unconscious pun on queues, and the question of why the Ombudsman's office should worry at all about the immigration problems of rich people with lawyers — the EB-5 applicants — I worry that such conversations will dwell only on the desires of the current applicants for quick visas, not on the question of whether the qualifications are too relaxed.

One way to bring down the size of the waiting list is to make the standards more rigorous for the visa by running an auction providing chances to get these visas in a system in which $1.5 million would be the opening bid, as we suggested in an earlier blog.

Considering this suggestion and other demand-reducing approaches would be in complete harmony with the Ombudsman's office duties; in addition to casework, it has been tasked by Congress to identify "systemic problems in the administration of our legal immigration system and to propose recommendations where possible".