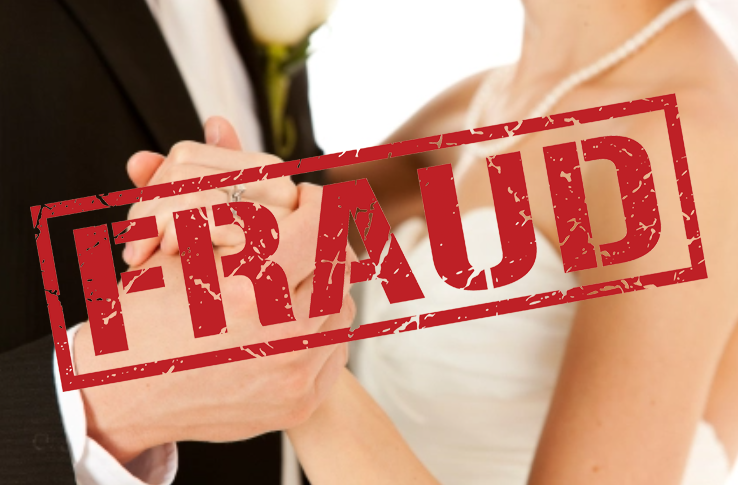 Two recent court rulings in the marriage-related immigration fraud sector, as well as a CIS observation on why some alien-citizen marriages that go bad are not necessarily fraudulent.

A Judge Rules, More or Less, on K-1 Visas

A D.C. federal court judge ruled last week that the State Department cannot suspend issuing the K-1 (fiancé) visas during the COVID-19 crisis, but, on the other hand, decided that he would not force the Department to issue visas to the 150 or so plaintiffs in the case – or at least not yet.

The judge is James E. Boasberg, and he said that he might rule differently if the delay lasts too long, according to a pay-walled article at law360.com.

As we pointed out recently, the K-1 visa, presumably used legally in most cases, is frequently involved in marriage-related immigration fraud, in which an alien spouse says that the motive for the marriage was love, when in fact, the driving force was that the alien wanted a green card.

The K-1 visa is the only visa, in a set that runs from A-1 (senior diplomats) to U (crime victims) that is not needed to meet the goal of the visa, which is the marriage of an alien to a citizen; this can be done in other ways. What the K-1 visa does do is to save the citizen from a round-trip airplane ride to marry the alien in the alien's home country.

A Footnote to My Colleague's Report on Marriage-Related Fraud

My colleague Art Arthur recently wrote about a case involving a man named He and three other Chinese nationals, all of whom pleaded guilty to breaking various immigration laws related to the marriages of aliens to citizens. This has been a three-and-a-half-year-long investigation involving scores of filings in the federal courts, an expensive process. He was the middleman, charging in one case $60,000 for the fraudulent, arranged marriage.

While reviewing the government's press release, I found something missing.

One of the reasons to indict people for breaking the law is to spread fear among other potential law breakers. In this case one of the cash-supplying aliens, Hanzhong Wu, according to the press release, "was sentenced to one year of probation," which, standing alone, sounds like a gentle slap on the wrist.

What was left out is the fact, clearly stated in their 19-page long plea agreements signed by Wu and the other two "spouses", was that they understood that signing the document meant that it was virtually inevitable that they would be deported. That should have been in the first section of the press release, and probably accompanied by the photos of the three who paid the bribes, as well as that of He, the middleman.

The federal courts, in these situations, do not deport people, DHS does, but to hide the fact of their potential deportations is a mistake. For more on the Wu case, see PACER file 5:2020cr00070, with the "cr" standing for criminal.

Bad Alien-Citizen Marriages Do Not Always Include Fraud

time to time, and few others do, we often get notes from citizen victims telling us about what they think is marriage-related immigration fraud. Some of these often heart-rending messages, are, in fact accounts of this kind of fraud; and some of them, equally troubling, deal with bad marriages that involve an alien, but no apparent immigration fraud

We will use no names here because we only hear one side of the story, that of the citizen, but let me summarize a couple of stories we have heard lately that fall into the bad-marriage-but-not- fraud category.

The 30-ish citizen, a homosexual Hispanic male, entered into a marriage with a younger homosexual man who was also Hispanic, but a non-citizen. Everything went reasonably smoothly for several years, with the citizen signing papers that made his husband a legal resident of the U.S. (as an immediate relative of a U.S. citizen).

Then the younger man found what he regarded as a more attractive male partner, and left the marriage with the citizen. I do not see a fraud case here, just a marriage that did not work, as a large portion of American marriages do not succeed. (I had one such, with a female citizen, some decades ago; there was no fraud charged by either of us.)

Similarly, we heard from a female citizen about her marriage with an illegal alien. Again, things went well for the first couple of years, and she filed papers for him. Then he started to beat her and moved out of the house and, she reports, he comes around to see her only when he is unemployed and/or homeless. Again, a grim situation but probably no fraud.