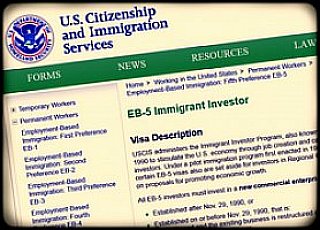 The governmental part of the EB-5 (immigrant investor program) came to a halt at midnight, Friday night, January 19, as the House and the Senate disagreed on a spending formula for the federal government, as noted in this USCIS announcement.

One might describe the momentary suspension of EB-5, and two other specialized immigration programs (Conrad 30, largely for foreign physicians in poverty areas, and the special religious-workers scheme) as victims of the Senate Democrats' insistence on granting legalization in some form to the DACA beneficiaries.

There is a bit of an irony here: Three little programs for small, privileged groups of aliens (physicians, investors, and religious workers) are being hurt by Senate Democrats' focus on the larger, but much less well-off population of DACAs.

In the case of the three programs just mentioned, plus the E-Verify service to employers not wanting to hire illegal aliens, their legal authorization ended with the non-passage of the spending bill. These programs had been kept in business for some time by a sequence of temporary patches to their authorizations, but the string came to an end Friday night.

This is different from the general government shutdown (or more accurately, slowdown) that relates to the government running out of money. Some national parks, for instance, may not be open because of lack of funds, but not because of a lack of authorization.

As with all things governmental, there are complications within complications, so the entire EB-5 program has not come to a pause, just the part that deals out benefits. Aliens can still put their half-million-dollar bundles into U.S. investments, the money can be used or sometimes mis-used by the middlemen, as before, and construction on EB-5 projects can keep moving but no government-produced benefits can be secured until the program is re-authorized by Congress.

Specifically, three different kinds of EB-5 benefits will not be awarded during the non-authorization period: there will be no conditional (two-year) green cards for the alien investors; there will be no conversions of the temporary green cards into permanent ones for alien investors who had purchased the conditional cards two years earlier, and there will no new regional centers (middleman entities) granted licenses by DHS.

A seldom-used portion of the EB-5 program, which provides green cards for aliens paying $1 million or more for existing businesses (as opposed to half a million in supposedly depressed areas), has permanent authorization and continues to be part of American law. (Whether there will be staff available to handle any of these $1 million applications is another matter.)

Just add it up to one more insecurity in the EB-5 program; maybe this will discourage some of the world's restless, worried rich from applying to the program.

On the other hand, EB-5 may be revived by the time you read this note.