New Farmworker Bill Would Be Bad for American Workers 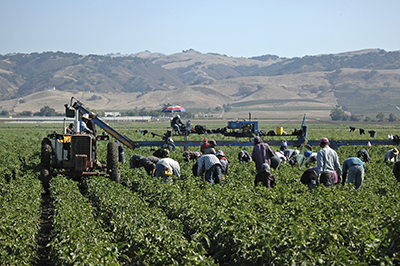 Currently we have about 165,000 temporary foreign agricultural workers a year, mostly from Mexico, working on the nation's farms under the long-established H-2A program. These are nonimmigrant workers who are not on a path to permanent resident alien (green card) status.

A bill being discussed on Capitol Hill, to be introduced by House Judiciary Committee Chairman Bob Goodlatte (R-Va.), would scrap that program entirely and replace it with a much more grower-friendly program. The H-2C program would initially allow 500,000 nonimmigrant farm workers each season, with that ceiling being subject to a regular expansion of 10 percent a year if growers used the program to its limits.

The 46-page draft document creating a new farmworker program, which does not yet have a bill number yet, can be seen here. It is called the "Agricultural Guestworker Act", the euphemism for alien workers long used in Europe.

If the nation's concern is saving jobs for U.S. workers, not further depressing wages in the ag sector, not exploiting foreign farm workers, and not further inflating the size of the nation's population, this bill is terrible. Among other things it:

There is one useful, but perhaps not new, element: that is the deduction of 10 percent of the workers' wages to be repaid once they return home, if they do that. The payments would be made only in the home country, and only at U.S. embassies and consulates or places designated by them. This is an incentive to go home (primarily to Mexico). It would also, and the authors of the bill may not recognize this, provide data on the extent to which people did, or did not, go home at the end of the season.

This segment of the program could be an argument for the bill if the employers were forced to chip in 10 percent of the wages to this fund as well, but I do not see that happening.

The bill also allows for a specialized semi-amnesty for illegal aliens now working illegally in U.S. agriculture. They can convert themselves, presumably after the most sketchy of screenings, to H-2C workers. Unlike the legalization programs of the 1980s, this change of status does not seem to lead to green card status. (In the old days of the Eisenhower administration, when linguistics management had not yet taken effect, this process was known as "drying out the wets".)

I could not see anything in this bill on this specific point, but I suspect that H-2C, like H-2A, would give the employers a 7.65 percent discount when they hire foreign workers by excusing them from paying payroll taxes on those foreign workers, thus further handicapping the trust funds for Social Security and Medicare, which need all the help they can get.

It is not generally recognized that the cost of food in the United States is generally lower than in the rest of the world, and that raising the retail cost of say oranges or apples by a penny or two a pound, if all the extra were devoted to the people who harvested it, would increase farm labor wages by 20 percent or so, which, in turn, would make working on farms much more attractive for workers generally. This is not a thought process that is encouraged by agribusiness.

Disclosure: the author was assistant to the secretary of Labor for farm labor during the (Lyndon) Johnson administration.