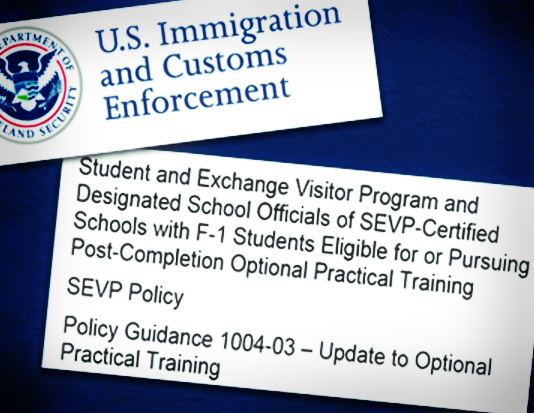 The OPT program is an Executive Branch creation without congressional approval, takes 200,000 jobs a year from (un-subsidized) citizen and green-card college grads, and drains an estimated $2 billion a year from the trust funds for America’s elderly, infirm, and unemployed, which should cause the bitter opposition of the left, but does not.

The subsidies come through the non-payment of payroll taxes by all employers and many aliens in the program. Those taxes support the Social Security, Medicare, and federal unemployment insurance trust funds.

The media, which writes about OPT from time to time, rarely mentions the subsidy program that goes with it; the congressman, to his credit, is vocal in his opposition to it.

To limit the damage done to American interests by OPT, Cawthorn proposes to cut back the time that alien college graduates can work in it to six months. This would be a significant (and welcome) reduction, as the program can provide up to three years of subsidized post-college employment for the many aliens who have taken STEM majors (i.e., those in science, technology, engineering, and math); the program runs for only a year for those in non-STEM fields.

Cawthorn’s bill is entitled the Responsible Practical Training Act. It would, in addition to reducing the “training” period, bar aliens schooled in any military or related disciplines, and would require the secretary of Labor to provide a wage-impact study of the program.

The congressman points out in Real Clear Policy, that:

To the extent that people from Iran and China study in these fields and then work in them, they get U.S. money to do so. I suspect that the Chinese and Iranian governments do not finance American college graduates working in those fields in those countries.

Any bill introduced by a freshman member of the minority party faces huge obstacles, but so did Rep. Cawthorn on his way to the House. Only 24 years old at the time of the GOP primary in a mountain district in North Carolina last year, he defeated a rival Republican who had been endorsed by then-President Donald Trump, and then Cawthorn won the general election by a large margin.