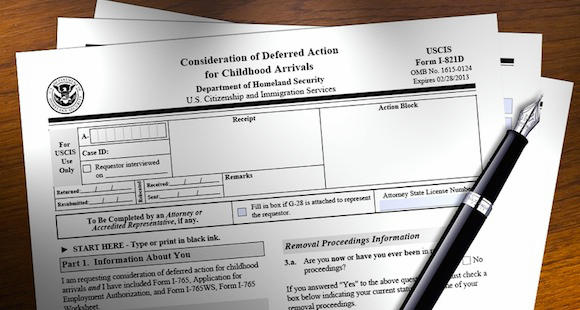 A federal judge — as such judges are wont to do — ruled last week that the Trump administration can't close the DACA program for a special group of illegal aliens, and must accept new applications for the program.

The judge told DHS to revive the program on Monday, December 7, a tall order for any bureaucracy, much less the not-so-nimble Department of Homeland Security.

DACA recipients, now marching slowly toward middle age, are in the Deferred Action for Childhood Arrivals program, people who have claimed that they came to the U.S. before the age of 16. They have temporary legal status in the U.S., the right to work here legally, and Social Security numbers. They do not, as a rule, have the right to move to green card or citizen status though some, who marry citizens while in DACA status, may do so.

While a handful of the potential beneficiaries of the program may be 19 or under, most of them are in the 20-39 age range.

Given the age at arrival, often not arriving on their own, but as children, and the favorable press they have secured, this is one of the more attractive subpopulations of illegal aliens. A loving media has called them the "dreamers".

The program was set in motion without an ounce of congressional input by the Obama administration on August 15, 2012, and covered those who claimed illegal entries before June 15, 2007. Thus the population potentially eligible for the program cannot increase in size, though the actual population can, and has, shrunk steadily in the past, a point to which we will return.

Congress has had more than eight years to undo the program, and hasn't done anything. Similarly the Trump administration has had nearly four years to do something, and has not, in fact, done it. So the decision by the judge is hardly surprising, although it may be appealed. But the horses have left the barn ages ago, and are not likely to be corralled again.

Having violated immigration laws through no fault of their own by being brought to the United States as minors, they are required to have a high school diploma or G.E.D., unless they have served in the military, and they must maintain a clean criminal record to hold on to their status.

Plenty a 14-year-old and a 15-year-old has crossed the border on his or her own, but this is never mentioned by the press. (Most people in DACA are from Mexico.) As to the education requirement, one has to have a diploma or a GED, or — and this is rarely mentioned — have been enrolled in a school of some kind on the day that the application was filed, a minimal stipulation.

As to the military experience, no illegal alien in the military in his or her right mind would be involved in DACA because other legislation would make it possible for that alien to go straight to a green card. The past military service concept, a government-created illusion, is always mentioned by DHS writers and repeated by reporters, yet when we at the Center for Immigration Studies filed a Freedom of Information Act request for the number of DACAs claiming the military exemption, we were told that the government had not bothered recording how aliens answered that question.

So DHS talks about the military experience of DACAs, but has made sure that the concept cannot be challenged numerically.

Numbers. Speaking of them, government records show that about 825,000 aliens were approved for DACA status over a multi-year period when applications were being accepted and the Times provided an un-sourced estimate of 300,000 more potential enrollees. I take that number with a grain or three of salt, on the dual grounds that those 300,000 had years to apply and did not do so, and because of the declining number of active enrollees.

Again, a point totally missed by the press, the population of "Approximate Active DACA Recipients", has fallen substantially as the program has aged, with more than a fifth of one-time beneficiaries having dropped out of the program. I regard the fall in these numbers as reflecting generally a disregard for the effectiveness of immigration law enforcement — once you have a work permit (even of limited duration) and a legit Social Security number, why pay a $495 fee to stay in the program for another two years?

Thus, over a period of 25 months there has been a steady decline in the program's enrollment by about 2,200 or so a month. There are about 179,000 aliens who once were once in the program and have since dropped out. We assume that most of those leaving the program were once eligible and simply did not re-apply.

Were these numbers better known, the image of the "dreamers" might not be so favorable.

What's Next? There are numerous possible developments:

What about the 179,000 who were once in the program and who have since dropped out? Will they be treated the same as the 646,000 who played by the rules?

One possible compromise is to grant the 825,000 or the 646,000 a road to permanent residence (and later citizen status, should they go through naturalization) with a provision that they could not use that status to create more chain migration. Perhaps the offer could be framed in such a way that the "dreamers", individually, could opt to waive any immigration-creating benefits in order to get their green cards.

Thus the law would not demand that anyone give up their chain-migration rights, it would simply make it possible for them to secure, voluntarily, permanent legal status should they choose to do so. Those left in the DACA category, the ones who do not accept the offer, could continue to seek green card status in other ways, notably marriage to citizens. Thus, there would be no compulsion involved, just a limited offer.

No parents would be separated from small children, as current rules provide instant citizenship to all those born here, whether to DACA parents or others.

The long-term numerical impact of granting legal status to those accepting the waiver would be much less than a call for full citizenship rights for all now in DACA status.

The more-migration people would, of course, complain vigorously about the proposed limited offer.