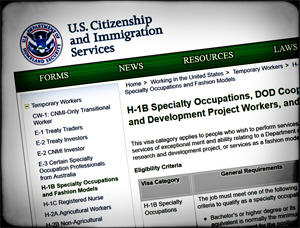 The House Judiciary Committee advanced an H-1B bill Wednesday that would make some very useful changes to the program, but not as many as the scheme's critics would like and not as dramatic as this headline in the Indian publication The Economic Times might suggest:

It turns out that the proposed healthy increase to at least $90,000 a year (or, if it is higher, the "mean wage level for the occupational classification in the area of employment") applies to the many employees of employers with lots of such workers (i.e., "H-1B-dependent" employers), but has no direct impact on many other workers in the program, such as school teachers. The H-1B-dependent employers are currently defined as those with 51 or more workers and with 15 percent or more of their staff in the H-1B program. That definition is to be tightened a bit in the new bill, changing the portion to 20 percent.

The general notion is that by increasing the wages of some H-1B workers, by increasing some fees on employers (more on that later), and by laying on some obligations regarding recruiting American workers, and the resulting additional paperwork, the new regulations will, as a package, encourage some employers to hire U.S. residents instead of foreign ones.

This gradual and indirect approach apparently was regarded as more politically palatable than simply reducing the number of visa slots below the current allocation of 85,000 new ones a year. Another approach could have been to limit H-1Bs to a single year's extension of their visas, rather than the three-year extension of the usual first-time, three-year visa that is current practice.

There are some 800,000 to 900,000 H-1B visa holders taking jobs in the country at any given time. A very large proportion of them are from India, and many work in computer-related fields. Many of these work for large, India-based outsourcing firms such as Infosys and Cognizant.

As is so often the case in the immigration business, the "increase in the minimum wage" concept in this bill (H.R. 170) is not a straightforward one. H-1B-dependent employers have an obligation, as other employers do not, to try to recruit Americans for their H-1B jobs; this seemingly rational requirement, however, can be avoided if the employer pays the minimum wage described above. The previous level of $60,000 a year persisted for decades and is no longer a useful benchmark.

My general sense is that the changes described above are modest steps in the right direction, even though journalists, here and in India, will pay too much attention to the seemingly high wages required for some employers if the bill becomes law.

They, similarly, will write too often about the bill's demands that no Americans can be replaced by H-1B workers, not realizing that the real problem with H-1B lies elsewhere — it is that the employers, with vacant positions, hire foreign workers when there are plenty of highly competent U.S. workers at these salaries to do the work. Replacement of U.S. citizens or legal residents, as at Walt Disney, is dramatic but relatively rare — it is non-hiring in the first place that is the real problem.

The Silver Lining. Meanwhile, there is a silver lining in the bill that should not be overlooked. This is the injunction to the U.S. Secretary of Labor (disclosure — I used to work for one in the Johnson administration) to investigate 5 percent of all H-1B dependent employers and to fund this activity with a fee, starting at $495 for each new and transferred H-1B worker.

Assuming that at least half of the H-1Bs work for the H-1B-dependent employers, this would produce at least 40,000 fees a year, or close to $20 million for these investigations. If this provision is, in fact, enforced — and that is not automatic — this might put as many as 80 or 100 extra wage-hour investigators in the field, all making sure that a fairly narrow band of H-1B employers are carefully examined.

My sense, from my years at the Department, is that these field people are dedicated to the interests of the working man, and they could do a lot of good. Later, when I was with the Department of Interior on duty in the Commonwealth of the Northern Marianas, a very hostile environment for the enforcement of the labor laws, I was deeply impressed by the two or three wage-hour guys on that difficult beat.

My hope would be that the secretary would notice the "may" in the proposed legislation and shape his policies accordingly. The text of the bill says:

Note the use of "may" in one part of that sentence in the bill, and "shall" in another.

I would encourage a combination of random, unannounced site visits with a program of targeted, unannounced sites visits, in which the kinds of employers with fraud-prone profiles are given special attention. Does a policeman seeking to lower driving speeds set up a random schedule of speed traps that might put him on a little-used country lane at four in the morning? No, of course not, he works high-traffic areas known for speeding, and works when conditions favor excessive speed.

Rep. Darrell Issa (R-Calif.) brought the bill to the committee and he offered a substitute with completely different wording, apparently worked out beforehand with other ranking members. The Chairman, Bob Goodlatte (R-Va.) then provided yet another substitute, with what appear to be minor changes, and that bill was sent to the floor on a voice vote.