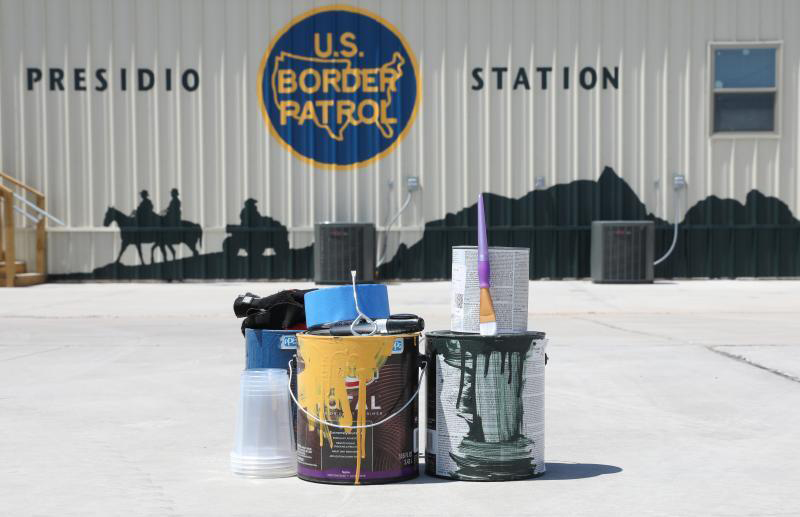 As one who is often critical of Border Patrol press releases — they are often wooden, full of insider and awkward verbiage, and leave out key details — let me commend an attractive one from that agency that just came across my computer.

It deals with one the bleakest outposts of the US. government in the Lower 48, the Border Patrol station at Presidio, Texas. It is a lonely spot about half-way between El Paso and Laredo, and I have been there, decades ago. As you drive south from Marfa, a bigger town in the same area, the English-language radio stations fade and the car radio picks up nothing but Spanish-language ones. The surroundings are hot and dry, and the traffic is slim; there is a great deal of rural poverty and there is greater sense of empty space.

The town is small and the buildings unimpressive. I asked the guys at the port of entry about a rather large white house near the port; “That’s the home of the man who owns the U.S. half of the bridge,” I was told. So the bridge to Mexico over the fairly slim Rio Grande was privately owned then, and may still be.

The press release deals with a large mural at the nearby Border Patrol station headquarters. Let it speak for itself:

Border Patrol Agent Janenne Ellis knows a thing or two about heat. That’s because she works on the border at Presidio Border Patrol Station, an area which is generally 10 degrees warmer than Big Bend Sector Headquarters in nearby Marfa, Texas. She also knows that sometimes the best way to get through the day is to “brush it off.” That’s exactly what she, and a small group of volunteers, did recently at Presidio Station when they painted an inspiring mural on a new building.

Presidio is a small town on the Southwest border of Texas and Mexico located in the famous Big Bend region. In the summertime it’s sweltering with temperatures breaking 100-plus degrees for weeks at a time. It’s also a hot spot because the Presidio Port of Entry is located here and the activity associated with illegal immigration, drugs and contraband being pushed through the area by smuggling organizations.

In the region, buildings usually have a light tan or brown exterior to keep the heat down. That’s true for most of the buildings within the Presidio Border Patrol Station too. So, when a new building was brought in, the station ended up with the broad side of a tan building sitting directly inside of and facing those entering the main gate. This perfect “blank canvas” became a morale-boosting mural project led by Watch Commander Janenne Ellis. “That is what you see when you come in the gate here,” said Ellis. “The side of a blank wall. When they were putting it up, I was thinking that would be so cool if we had a mural here.”

Ellis is an Army veteran and is currently the only female agent at Presidio Station. Her husband, Steven, is a retired Army vet who now plays the role of key spouse. Both were instrumental in turning an idea into art and improving the aesthetic appearance of the entire compound, she said.

The large mural incorporates symbols and silhouettes across the length of the building to represent various landmarks in the region and aspects of the job. Featured jobs include horse patrol, ATVs and even unmanned aerial systems. The mural was done in long-lasting paints and painstakingly applied by hand using brushes to increase the detail and accuracy.

Something like this doesn’t happen without leadership approval. However, that was not hard to get after the proposal was made to Silverio Escontrias, Presidio’s patrol agent in charge.

“The mural is a direct reflection of Presidio Stations Esprit de Corps and our agents’ dedication to border security,” he said.

Ellis recalled that it took just over a month to complete because they worked on it during off-duty hours using their own supplies. “It was a lot more [time] than we thought it was going to be to start,” she said.

Those entering Presidio Border Patrol Station now have a visual representation of the pride, history and roles agents take in protecting America’s front line. Sean L. McGoffin, Big Bend Sector’s chief patrol agent, said he was so impressed with the results and improved morale that this may be the start of a sector-wide effort allowing various stations to do similar projects.

Kudos to all involved.