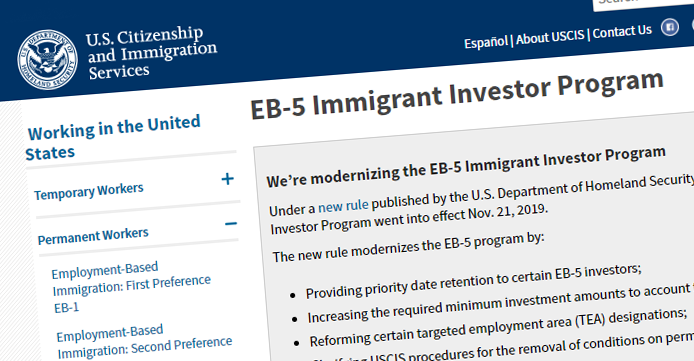 The ceiling on the number of visas is 10,000 a year, yet in the first three months of 2020 there were exactly 21 applications filed. In the same period one year earlier, the total number of applications was 1,808.

EB-5 is the program that rewards an alien investor with a family-sized batch of green cards when the investor plunks down a suitable amount in a DHS-identified, but not guaranteed, investment. The stake is usually in a 1 percent a year de facto loan in urban real estate. Big city developers love getting money at this rate.

There have been a large number of instances in which U.S.-based middlemen have cheated, or sought to cheat, the alien investors, as we have reported from time to time.

One of the main reasons for the recent sharp fall in the number of would-be investors is because in November of last year, DHS upped the minimum ante (after 25 years of not doing so) from $500,000 to $900,000. The same set of regulations also narrowed the definition of areas that could be invested in, eliminating at least some of the prosperous areas that had formerly been used for most of these investments via a sort of gerrymandering.

Apparently aliens interested in the EB-5 program — seeing the November reforms coming — made their investments before the new rules came into being. There were 4,262 applications filed during the last three months of last year, presumably all of them prior to the new rules. During January, February, and March of this year, only 21 applications were filed, according to this USCIS reporting system.

Put it another way, the 21-applications-a-quarter rate indicates (if the trend continues) a 98 percent drop in the annual EB-5 business.

Inevitably, the lure of a purchased set of visas, allowing the nervous rich to settle in the United States, will attract more attention, presumably from aliens from places other than China. The previous extensive use of this program by aliens from that country was such as to produce a decade-plus delay in getting the green cards after making the investment because of long-standing per-country limits on numerically limited visas. The recent drop in applications was sharp enough so that a much shorter visa backlog for people from India has disappeared.

In the meantime, the EB-5 middleman industry must be hurting, and will try to use its lobbying strength to restore the program. (Sen. Chuck Schumer (D-N.Y.), the Senate minority leader, and perhaps soon the majority leader, is one of the program's prominent supporters.)

We had previously reported that the program was in a years-long state of decline, but those long-term trends were nothing like the 98 percent drop we see currently.