Did Uncle Sam Literally Pave the Way for the Illegal Aliens at Del Rio?

Why no fence in the middle of the dam migrants are using to enter illegally? 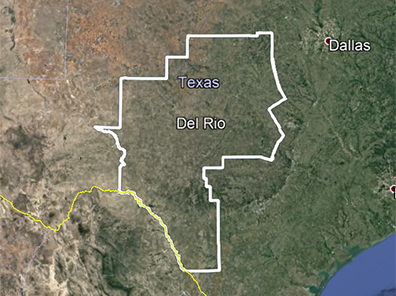 You have all seen those pictures of large numbers of illegal aliens wading across the river at Del Rio, Texas.

My question is: How much did our government pay, at some point in history, for the dam’s apron on which the aliens are crossing? And, more importantly, why is there not a fence in the middle of the river?

The photos I have seen in the Washington Post show people wading across the river in water a little higher than their knees. There are several of these aliens, walking side by side, indicating a 10- to 20-foot apron behind the dam, probably made of cement.

Now, no one builds dams across an international river without some governmental money and the cooperation of both nations, so at some point in the past the federal government spent some millions for the dam, which may have been built for flood control, and/or power generation purposes. The walking patterns of the illegal aliens suggest that there is a wide apron behind the dam, a structural element designed to strengthen it.

No one has a right to walk across the dam from one nation to the other; there are ports of entry for that purpose. Yet the de facto walkway was apparently built without a flood gate in the middle of the river, which would have been a barrier.

Further, in the years since the dam was built, no fence has been added. Such a fence would be parallel to the flow of water, so it would not create problems with flooding.

Why, during the Trump years of spending billions on walls, was not a $100,000 or so of fence built to block such an obvious walkway? Why hasn’t one been there for decades?