On May 1, amidst the transfer of thousands of visa-less Cubans from Central America to the U.S.-Mexico border, an immigration agreement between Mexico and Cuba came into effect.

The Memorandum, reaffirmed in Mexico last November, aims to establish a "legal, ordered, and secure migratory flow" between Mexico and Cuba. The agreement was originally signed between the two countries in 2008. As such, the Memorandum establishes the following guidelines in relation to illegal immigration and returns: 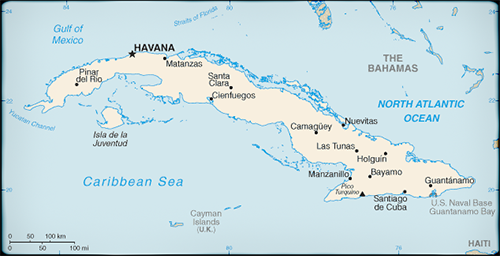 On illegal migration, smuggling and trafficking, as well as all crimes associated with these crimes, such as theft and hijacking of ships and aircrafts, and security of the States…

Article 9. - The provisions of this Memorandum shall not limit the right of the competent authorities of both Parties to deny entry and stay in its territory to citizens of the other Party that they consider undesirable or which may endanger the public order or state security, as well as prosecute and punish those who break them, in accordance with their respective legislation.

Article 10. - The Parties agree to establish an effective scheme of maritime operational cooperation between the Navy of Mexico and the Directorate of the Border Guard Troops of the Ministry of Interior of the Republic of Cuba, to combat the illicit [acts] referred to in this Memorandum, including, inter alia, the interception of vessels involved, catching traffickers and conducting return operations of nationals of both Parties by sea, as provided by this Memorandum, which will be coordinated and clarified by both institutions.

Article 11. - The Parties commit to return all nationals that are acceptable to the counterparty under this Article. Mexico will accept the return of all its nationals. Cuba will accept the return of its citizens in the following categories: a) those that enter Mexican territory directly and illegally; b) those who are temporarily abroad within the legal terms established by their immigration regulations and have an irregular immigration status in the Mexican territory, except those authorized to travel to the United States of America; c) those who have directly and illegally migrated to Central American countries, and are in an irregular situation in Mexico, as long as they are within the timeframe since leaving Cuba, which will be established through diplomatic channels.

The parties reserve the right to not accept returns. These cases will be notified through official channels. The content of this Article shall apply without prejudice to their respective national laws. (emphasis added).

Given the broader qualifications for repatriation spelled out in the Cuba-Mexico memorandum, the following question must be raised: why does the Mexican government release Cuban illegal aliens with a 20-day "safe passage permit," allowing them to then reach the U.S. border, rather than return them to Cuba?

However, this is a non-issue for Mexico and Cuba, as they know that their neighbor to the north will welcome the islanders with open arms. Ultimately, the United States' Cuban Adjustment Act and "wet foot, dry foot" policy serve as a relief to the renewed memorandum: Cuba can continue to not recognize its nationals, Mexico does not have to pay the costs of deportation (as mandated by the memorandum) or extend the detention periods, and the United States will continue to take in the Cuban illegal aliens.