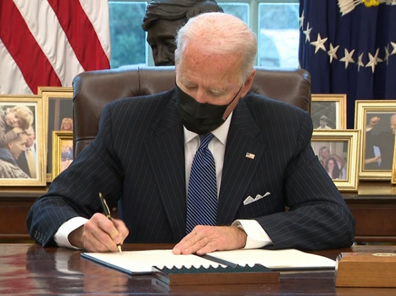 The Biden administration has largely spent its first year blaming former President Trump and his administration’s policies for the border crisis that has only worsened since Joe Biden’s electoral victory in November 2020. The new president issued a flurry of immigration executive actions in his first couple of weeks in office, including one focused on President Trump’s short-lived “Zero-Tolerance Policy”. Through Executive Order 14011, President Biden established an interagency task force on the “reunification of families”, which he defined as, “It is the policy of my Administration to respect and value the integrity of families seeking to enter the United States. My Administration condemns the human tragedy that occurred when our immigration laws were used to intentionally separate children from their parents or legal guardians (families), including through the use of the Zero-Tolerance Policy.” In non-political language, what Biden means is the illegal alien family units (FMUs) who were apprehended at the border and temporarily split up while the parents were subjected to immigration enforcement.

On December 10, 2021, the task force, through the Department of Homeland Security (DHS), published a notice in the Federal Register seeking public input on the issues of “family separation” and reunification. In a December 16 post titled ”Mayorkas's Curious Request for Comments on Minimizing 'Family Separation': The secretary may hear some things he doesn't want to”, Andrew Arthur wrote that “There is plainly a difference between ‘minimizing’ family separations (the term used in the Federal Register) and ‘ensuring that they never happen again’” (paraphrasing a Mayorkas press release that accompanied the notice). Arthur added, “Respectfully, the only way that the Biden administration can ensure that family separations never happen in the future (and specifically under another administration with the temerity) is to (1) change the law and/or (2) prevent family units from entering the United States in the first place.”

Comments were originally due on January 10, 2021, but DHS subsequently extended the deadline to January 25. On the 25th, I submitted a comment on behalf of the Center that largely touched on the two points Arthur outlined in his December post. The comment expanded on the definition of “family separation”, which the Biden administration has routinely ignored. The Center wrote:

Family separation comes in multiple forms, though the Biden administration refuses to acknowledge the most obvious one. When an economic migrant sneaks across the border to unlawfully work in the United States while leaving his family behind in the home country, that is family separation. When the Biden administration refuses to apply Title 42’s expulsion authority for UACs and alien families make the decision to hand their children over to coyotes and smugglers to gain entry into the interior, that is family separation.

Briefly, the Center offered the following six points for how the Biden administration could combat family separation: