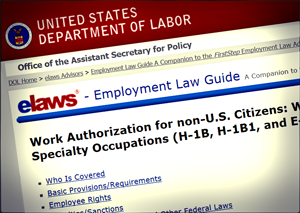 As government-mandated shutdowns to stop the spread of Covid-19 crippled a booming economy in the spring of 2020, then-President Trump took swift action to prioritize Americans during the ensuing recovery. Through a series of presidential proclamations, the Trump administration barred — and continued to bar — the entry of immigrants and nonimmigrants who posed a risk to the U.S. labor market during the economic recovery. On December 31, 2020, President Trump issued another proclamation extending the immigrant and nonimmigrant worker freezes through March 31, 2021.

These actions by President Trump reaped substantial dividends in getting Americans back to work, but effects of the Covid-induced economic devastation lingered. As the December 31 proclamation said:

The 2019 Novel Coronavirus (COVID-19) continues to significantly disrupt Americans’ livelihoods. While the November [2020] overall unemployment rate in the United States of 6.7 percent reflects a marked decline from its April [2020] high, there were still 9,834,000 fewer seasonally adjusted nonfarm jobs in November [2020] than in February of 2020.

Yet, in a major affront to millions of Americans still struggling to make a decent living, Reuters reports, citing three officials familiar with the decision, that President Biden is going to allow the temporary worker freeze to expire. Biden already killed the immigrant freeze in one of his earlier executive actions on immigration. Is it “Mission Accomplished” on the economic recovery? Hardly. As Reuters points out, while jobless claims dropped to a one-year low in mid-March, “a Labor Department report last week showed a large number of Americans — nearly 19 million — were still receiving unemployment checks.”

This decision is particularly crushing to American tech workers and young Americans about to graduate next month with science, technology, engineering, and mathematics (STEM) degrees. The H-1B program, which was subject to the Trump ban, is one of the biggest pipelines of cheap foreign workers who displace American workers and suppress wages, particularly in the IT space. Unlike other guestworker programs, there is no general requirement that an employer be unable to find a qualified American first. Even the small subset of employers subject to the recruitment requirement can bypass it, thanks to a lobbyist-written loophole that allows “H-1B dependent employers” to not recruit Americans if the employer merely pays the foreign worker $60,000 a year. Any guesses how far a $60,000 salary goes in high-cost areas like Silicon Valley, New York City, and Washington, D.C.?

President Biden’s decision to reopen the pipeline of cheap foreign labor is a win to his tech industry donors who value profits over fair market wages. This move will jeopardize the economic recovery and further diminish the ability for many qualified and willing American workers to secure decent jobs.