Was Barbara Jordan a ‘White Nationalist’? 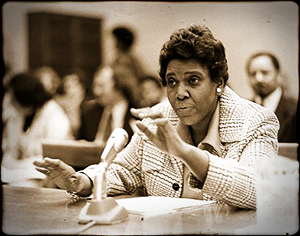 The pearl-clutching reaction of much of the chattering class to the Cotton-Perdue RAISE Act on immigration has been a wonder to behold. Charles C.W. Cooke discussed the "agree with me or you're against immigrants" silliness in National Review Online, but I wanted to point out something else.

The inspiration for the RAISE Act is the mid-1990s report of civil rights icon Barbara Jordan's bipartisan U.S. Commission on Immigration Reform. Though there are many differences in the details of the two proposals, the basic ideas are the same: Abolish the ridiculous Visa Lottery, focus family immigration on nuclear family, and rationalize and streamline the skilled immigration process.

But don't take my word for it. Here are excerpts from the reports (links to the pdfs are here):

Immigration supports the national interest by promoting strong and intact nuclear families—that is, the basic social unit consisting of parents and their dependent children living in one household.

Immigration policy also can contribute to the strength of U.S. families by ensuring that immigrants receive any needed financial support from their own relatives and, thus, impose no financial burdens upon the taxpaying public.

At the same time, immigration to the United States should be understood as a privilege, not a right. Immigration carries with it obligations to embrace the common core of the American civic culture, to become able to communicate — to the extent possible — in English with other citizens and residents, and to adapt to fundamental constitutional principles and democratic institutions.

[T]he Commission believes that continued admission of parents should be contingent on a legally enforceable affidavit of support.

Unlike the Jordan Commission recommendations, the RAISE Act ends the green card category for parents, but permits their uncapped admission on renewable visas, contingent on proof of paid-up health insurance.

The Commission recommends elimination of other family-based admission categories, including:

The Commission recommends the elimination of the admission of unskilled workers. Unless there is another compelling interest, such as in the entry of nuclear families and refugees, it is not in the national interest to admit unskilled workers. This is especially true when the U.S. economy is showing difficulty in absorbing disadvantaged workers and when efforts towards welfare reform indicate that many unskilled Americans will be entering the labor force.

Check. The Jordan Commission decided against recommending a points system, like the RAISE Act does, but the goal was the same: rationalize and streamline the program to enable exceptional skills to come in while protecting less-skilled American workers.

The U.S. should allocate 50,000 admission numbers each year to the entry of refugees from overseas (not including asylum adjustments);

The Commission proposes a core immigration admissions level of 550,000 per year, to be divided as follows:

About the same as the RAISE Act.

So, was Barbara Jordan a "white nationalist"? Did she make the Statue of Liberty cry?