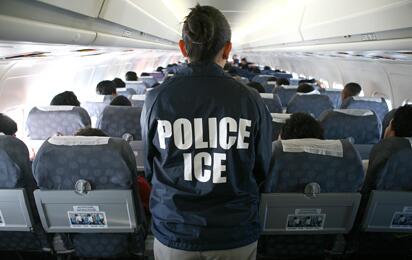 On November 19, Immigration and Customs Enforcement (ICE) announced an update on Operation Broken Promise, a plan to track down and detain illegal aliens who have violated a court order to leave the country under a specific disposition known as voluntary departure. The operation resulted in the apprehension of 154 illegal aliens, according to senior ICE official Tony Pham.

"Unfortunately, despite receiving the privilege of due process and giving their sworn promise to depart the United States, thousands of aliens are taking advantage of this pathway in our legal system by failing to honor their commitment to depart and continuing to exploit our judicial system and immigration processes," Pham told reporters.

Voluntary departure orders can be requested by an alien before or during immigration proceedings in lieu of an actual deportation order. Voluntary departure enables aliens to depart the country on their own accord without the legal ramifications associated with a deportation order, such as a five- or 10-year bar from future entry into the United States. Voluntary departure also spares the immigration agency (and taxpayers) the expense of a forced deportation. Unlike standard deportation orders, voluntary removal orders give illegal aliens 60 to 120 days to exit the country, typically with a stipulation that if the alien does not depart as agreed, then the alien is potentially subject to arrest, detention, and forced removal. The extended period provides aliens with time to plan for their return to their home countries and finish necessary business in the United States before departing. It is often given in cases of deported aliens who have children in school, for example. Thus, the voluntary departure order program provides a financial benefit to the U.S. government and a practical benefit to illegal aliens. However, as operation Broken Promise has demonstrated, many have failed to uphold their end of the deal with the American people.

"What's of additional concern is those individuals who are here illegally, broke their promise to leave the U.S., but also have criminal backgrounds," Pham said during the November 19 press conference. This is because the vast majority (80 to 90 percent) of aliens charged with immigration violations came to ICE's attention originally because they were arrested for a state or local crime.

Operation Broken Promise focused primarily on those who, on top of failing to uphold their promise to exit the country, have criminal records. Of the 154 aliens apprehended by ICE, 133 had prior criminal convictions, including convictions for sexual assault, cruelty toward children, and domestic violence.

As of November 18, more than 50 of the apprehended aliens had already been removed from the country due to operation Broken Promise.

According to one source, in fiscal year 2020, 16,451 immigrants were granted voluntary departure by an immigration judge. There is no public data on how many people granted voluntary departure have failed to depart, but ICE records show that in total about one million aliens who have been issued final orders of removal are still living in the country.

"This is just the beginning of the operation," Pham explained. "ICE will continue to seek out those who broke their promise to American people and the immigration courts."