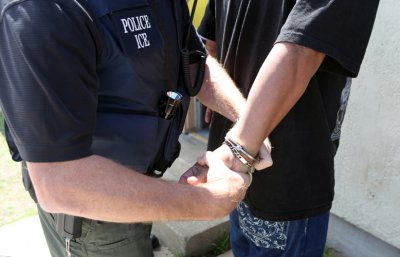 Acting Director of ICE Thomas Homan has vowed to crack down on sanctuary cities. True to his word, ICE conducted two major operations in the month of February that resulted in the arrests of 357 illegal aliens.

In California, deportation officers and agents targeted individuals they knew to be violating federal immigration laws. Because California is a sanctuary state, ICE officers were forced to conduct to at-large arrests in the community rather than in the controlled environment of a county jail. Discussing the California operation, Homan said:

Fewer jail arrests mean more arrests on the street, and that also requires more resources, which is why we are forced to send additional resources to those areas to meet operational needs and officer safety. Consistent with our public safety mission, 88 percent of those arrested during this operation were convicted criminals."

This operation resulted in the arrest of 212 aliens, 195 of whom were convicted criminals, had been issued final orders of removal, or had been previously deported. A majority (55 percent) of those arrested had prior violent felony convictions including child sex crimes, weapons charges, and assaults. Additionally, ICE sent notices of inspection to 122 employers in the Los Angeles area, in line with their decision to engage in further worksite enforcement.

A separate operation in Texas targeted criminal aliens and immigration fugitives. In a seven-day operation, ICE arrested 145 people, 86 of whom had prior criminal convictions including indecency with a child, drug trafficking, human smuggling, and assault. Sixty-one of these arrests included aliens who had illegally re-entered the United States after previous deportations.

The majority (128) of those arrested were from Mexico; others came from Guatemala, Honduras, El Salvador, Peru, and even Jordan.

Texas does not have a state-wide sanctuary policy like California does, but nonetheless many of its jurisdictions have adopted sanctuary policies in defiance of federal immigration law. Austin has risen as one of the most defiant sanctuary cities in the country. Current Travis County Sheriff Sally Hernandez said that she "believe(s) the current relationship between the Travis County Sheriff's Office and U.S. Immigration and Customs Enforcement must end. Travis County should not honor illegal, warrantless ICE notifications or detainer requests, period."

As in California, Austin's sanctuary policies forced ICE to make at-large arrests in the community. ICE officers arrested a total of 45 people in Austin. Given that ICE was targeting known criminal aliens and immigration fugitives it is likely that many of those 45 individuals could have been arrested at the jails were it not for Travis County's sanctuary policy.

Despite a feverish resistance from activists and politicians, ICE plans to continue targeting sanctuary cities that defy federal immigration statutes and thus endanger our communities and law enforcement personnel.