Nancy Pelosi: A Legislator Whose Comments Make Her Unworthy for Office 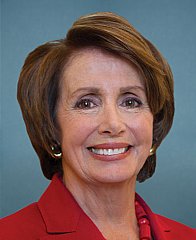 So Nancy Pelosi has said at a press briefing that the parents of so-called "Dreamers" "did a great thing" when they had their children smuggled to the United States. You know, the same Nancy Pelosi who is the minority leader in the House of Representatives and one-time speaker of the House, who was third in line to the presidency.

These are strange and inappropriate words from a legislator who is sworn to uphold the laws and Constitution of the United States. It is, after all, a federal felony to conspire to smuggle aliens into the United States, even if they are your relatives. But her remarks are worse than that, much worse, because encouraging that kind of activity is reprehensible on a moral level.

Here in our country, parents are routinely arrested if they so much as leave their vulnerable children sitting alone, locked in cars in a parking lot during the summertime for a short period; as they should be, since doing so puts the child's health and welfare at serious risk.

The parents of these alien children do much worse, though: they put their children into the hands of criminal gangs — and pay to do it — knowing that the journey will be excruciatingly tough, the chances of being abused or hurt high, and the possibility of extortion to wring more money out of the parent constant.

A child being smuggled from El Salvador or Honduras must illegally cross the frontiers of several countries en route to the north. The give-or-take 1,500 mile trek will take days or even weeks, through jungle, mountains, and deserts. The child will face climate ranging from stifling humidity and heat to bone-chilling cold at night in the high desert country, as well as searing dry heat in those same desert regions during the day. He or she will do so with little more than a backpack, and be obliged to rely on his captor/smugglers for food and water during the entire time. The child will confront poisonous insects and snakes, as well as opportunistic predators ranging from alligators to coyotes. This is not to mention the human predators, perhaps the worst of all: the smugglers who leave behind those who can't keep up or who oblige their charges to carry drugs as they cross so as to maximize their profit; or who sexually prey on young girls (or even boys) as a part of the "price" en route.

The parents know all of this. Some even have their teen and pre-teen girls begin taking birth control pills before commencing the journey.

Some will claim that these children are "fleeing violence" as a justification for what their parents do. It's a constant refrain, and sometimes true, but as often as not it isn't. Much of the violence arises in the major cities of those nations who give up their youth (and their future) to these smuggling ventures, whereas large numbers of the children and youth come from the small rural villages and pueblecitos. What these children more often face is grinding poverty and lack of opportunities.

We in the United States must deal constructively with the political and economic situations in their countries if these children are not to be put at risk — but the answer is most unambiguously not to laud and celebrate the parents who have put their children in so much danger, and in so doing cause others to give consideration to doing the same thing.

That Pelosi has made such foolish and intemperate remarks is to her shame, and shows how clearly out of touch with reality she has become.