A Fool's Game: Trying to Frustrate Eminent Domain and Impede the Wall 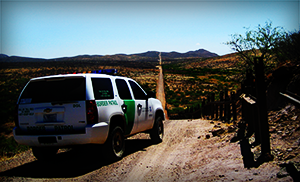 Here's a curious thing: Cards Against Humanity purchased several acres of land proximate to the southern frontier and then proceeded to sell slivers of these acres to purchasers in an attempt to bollix up the federal government's attempt to erect a border wall.

Haven't heard of Cards Against Humanity (CAH)? You're obviously just not with it. It's a politically correct kind of anti-politically correct card game that allows players to fill in the blank by way of free association, when confronted with slurs and other obnoxious words. Apparently it's a big hit with the nerdy and trendy set.

According to Gizmodo, the company (of the same name) behind the card game also engages in such highbrow hijinks as "selling unsuspecting fans boxes of literal [excrement]". How uplifting, and deeply humorous. Very droll indeed.

The Gizmodo article itself is equally droll. The author talks in disparaging terms about the wall requirements — "such as it being impregnable, covered in solar panels, invisible, up to 65 feet tall so no one will throw over drugs and 'hit somebody on the head' and paid for by the Mexican government", in the author's words.

There's no way I'm going to defend all of the things the president or others may have said about the wall, but the author clearly knows almost nothing about the porous state of southern border security, including the vulnerabilities of today's physical barriers.

Some of those requirements aren't as foolish as they appear, given the many breaches we have seen in the nation's border defenses — such as tunnels under existing barriers, air cannons to shoot large (and heavy) multi-kilo quantities of drugs over the border from Mexico onto the U.S. side, heavy duty industrial shears to cut through fencing and military-grade metal panels, and even massive trucks to simply plow down unsecured fencing.

In the instant prank, CAH says, "we've purchased a plot of vacant land on the border and retained a law firm specializing in eminent domain to make it as time-consuming and expensive as possible for the wall to get built." Apparently they sold out those slivers of land within a day.

I hope that CAH has deep pockets for that law firm. We live in a country where the Supreme Court has ruled that governmental rights of eminent domain (the lawful seizing of land for a governmental purpose) are so broad that, for instance, a local government could seize private property and then turn it over to a developer for a governmentally approved purpose. Think, by way of example, of a city seizing properties around an area that it then turns over to a major league sports team to build a stadium (likely heavily subsidized by taxpayers), in return for the team agreeing to relocate its franchise to that city.

So in this case, the likelihood of any property owner prevailing is virtually nil, although undoubtedly the law firm gladly accepted the retainer fees, in the hopes of siphoning substantial amounts of money out of the coffers of CAH and into their own if-and-when litigation ensues.

As for Uncle Sam: We know he has deep pockets, and a ready reserve of hundreds of lawyers scattered throughout the Justice and Homeland Security departments. My guess is that they will bowl over lawsuits objecting to the assertion of eminent domain like a ball making a strike through tenpins.

One wonders how the investors and stockholders of CAH must feel about such a maneuver, though. Are their pockets so deep that they aren't worried about the potential drain of company capital from litigation on behalf of these many (dozens? hundreds?) of new border landowners? Or perhaps that doesn't matter when you are so deeply committed to ineffectual virtue signaling.