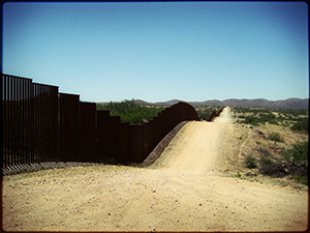 Mexican President Enrique Pena-Nieto has canceled a meeting with U.S. President Donald Trump after an apparently sharp telephone exchange in which Pena-Nieto demanded, and Trump refused, to avoid any public references to a southern border wall — or more specifically, to his oft-repeated campaign pledge that Mexico would pay for the wall — a pledge we haven't heard much about in recent days, even as Congress has dithered over whether or not to provide any funding at all to make the barricade a reality. This isn't the first such canceled meeting between the two leaders.

The border wall issue is more significant and more politically charged than ever on the Mexican side of the frontier, as the July election over a successor to Pena-Nieto looms ever closer. The three main candidates from different parties may be sharply divided on some things, but the wall isn't one of them.

In fact, the candidate now showing a lead in the polls, Andres Manuel Lopez-Obrador is, if anything, the harshest critic of U.S. border policies and particularly the wall — something that plays well, as one might imagine, to Mexico's electorate. Pena-Nieto's own party, PRI (Institutional Revolutionary Institutional Party), is behind and cannot afford to lose ground on this matter by ceding anything at all to Trump.

But it is precisely because of the coming election that, from a U.S. perspective, little is lost by this exchange of snubs. Not meeting with Pena-Nieto will change nothing in terms of the outcome since, as I said, on this singular issue there is no space at all between any of the three Mexican parties or their candidates' positions.

Of more interest, or concern, depending on your perspective, is why this was a sticking point with President Trump given that there is no tangible evidence that his administration has taken any steps to actually ensure that, in some way or form, the cost of the wall doesn't fall on U.S. taxpayers — assuming that he can ever get an intransigent Senate to pony up 60 votes to pass any immigration reform measure whatever.

It seems to me that the best chance to have achieved his goal would have been to fold within the confines of the recently-passed tax bill a measure that would have established a surcharge or levy on outgoing money orders, since these are financial transactions that occur in the millions, and that collectively represent a huge amount of the remittances being sent home by Mexican and other illegal aliens working unlawfully in the United States. (By making the fee refundable for anyone who files a tax return, as is the case in Oklahoma, the cost would be borne mainly by illegal aliens.)

According to CNN Money:

Mexicans sent home $26.1 billion from January to November 2017, according to figures released Tuesday by the central bank of Mexico. That's the most ever recorded and better than the $24.1 billion sent in 2016 over the same period.

The failure to wrap the remittance levy into the tax bill was a lost opportunity of epic proportions.

Doing so would have achieved the president's goal in a way that the Mexican government could hardly have complained about, given the source of the transfers and the fact that this money is forever lost to the U.S. economy when it is sent to Mexico or elsewhere.

So we are left with the question of who, exactly, will end up paying for that wall.