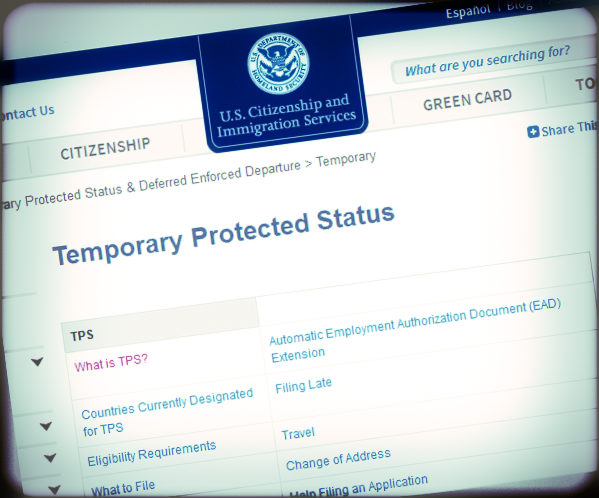 As U.S. Citizenship and Immigration Services (USCIS) explains, under section 244 of the Immigration and Nationality Act (INA):

The Secretary of Homeland Security may designate a foreign country for [temporary protected status (TPS)] due to conditions in the country that temporarily prevent the country's nationals from returning safely, or in certain circumstances, where the country is unable to handle the return of its nationals adequately.

While this form of protection is referred to as "temporary", in reality, certain countries have been designated for TPS for almost than 20 years, and in one case, more than 26 years.

As my colleague Mark Krikorian explained in 2016:

Congress in 1990 created [TPS] in an attempt to hem in unilateral executive actions on immigration. The law created a framework for presidents to let illegal aliens from a country stay here for a limited period of time if there was a natural disaster or civil violence back home that made the country "unable, temporarily, to adequately handle the return of its nationals." The point was to prevent presidential freelancing.

By law, aliens granted TPS are eligible for employment authorization, may apply for travel authorization, and may not be removed from the United States, so long as TPS for that country is in effect. An alien granted TPS may not be detained "on the basis of the alien's immigration status".

(i) the alien has been continuously physically present in the United States since the effective date of the most recent designation of that state;

(ii) the alien has continuously resided in the United States since such date as the [Secretary] may designate;

(iii) the alien is admissible as an immigrant, with specified exceptions, and is not ineligible for TPS; and

(iv) to the extent and in a manner which the Secretary establishes, the alien registers for the temporary protected status under this section during a registration period of not less than 180 days.

There are, however, exceptions to the continuous presence and continuous residence requirements for "brief, casual and innocent departures from the United States".

In addition, pursuant to statute and as USCIS makes clear, nationals of designated countries are not eligible for TPS if they:

Have been convicted of any felony or two or more misdemeanors committed in the United States;

Are found inadmissible as an immigrant under applicable grounds in INA section 212(a), including non-waivable criminal and security-related grounds;

Are subject to any of the mandatory bars to asylum ... [including for] participating in the persecution of another individual or engaging in or inciting terrorist activity;

Fail to meet the continuous physical presence and continuous residence in the United States requirements;

If granted TPS ... fail to re-register for TPS, as required, without good cause.

Under section 244(b)(3)(A) of the INA, the secretary must review the conditions in a country that has been designated for TPS no later than 60 days before the initial period of designation for TPS ends, "and ... determine whether the conditions for such designation ... continue to be met." By statute, if the secretary finds that a designated country "no longer continues to meet the conditions for designation", she must "terminate the designation by publishing notice in the Federal Register;" that termination is effective no earlier than 60 days after the date of such publication, or the expiration of the most recent extension, if later.

Interestingly, the statutory provision governing the extension of TPS designation is written in the negative:

Although it was likely not Congress's intent to make the extension of TPS designation the rule and the termination of that designation the exception, the foregoing provision makes it seem that way. This may be one of the reasons why certain TPS designations have been in effect for so many years.

That said, Somalia has been in a state of disorder for the past 26 years, and as the president stated in his recent proclamation on "Enhancing Vetting Capabilities and Processes for Detecting Attempted Entry into the United States by Terrorists or Other Public-Safety Threats", there is a "significant terrorist presence within [Somalia's] territory."

El Salvador's initial designation, on the other hand, was based on a series of earthquakes in that country in early 2001. Among the reasons for the extension of that country's TPS designation are: "subsequent natural disasters and environmental challenges, including hurricanes and tropical storms, heavy rains and flooding, volcanic and seismic activity, an ongoing coffee rust epidemic, and a prolonged regional drought that is impacting food security." Despite these challenges, according to the CIA: "El Salvador has the fourth largest economy in the region."

Honduras was designated for TPS due to the effects of Hurricane Mitch, which occurred in October 1998. As USCIS stated in its last extension of TPS designation for that country:

Since the last extension of Honduras' TPS designation, Honduras has experienced a series of environmental disasters that have exacerbated the persisting disruptions caused by Hurricane Mitch and significantly compromised the Honduran state's ability to adequately handle the return of its nationals. Additionally, climate fluctuations between heavy rainfall and prolonged drought continue to challenge recovery efforts. Toward the end of 2014, Honduras suffered damage from severe rains, landslides, and flooding, as well as from the heavy winds associated with Tropical Storm Hanna. Partially due to the heavy rainfall, Honduras saw a dramatic increase in mosquito-borne diseases, particularly dengue and chikungunya, in 2014 and 2015. The system of public hospitals is failing under this threat; in July 2015 the president of Honduras' medical school warned that public hospitals in Honduras were barely able to provide medicine for common illnesses, let alone an epidemic of chikungunya.

While the CIA states that "Honduras is one of the poorest countries in Latin America and has the one of the world's highest murder rates," it does not mention chikungunya as a threat today.

Nicaragua was also designated for TPS due to the effects of Hurricane Mitch in October 1998. In extending TPS for that country on May 16, 2016, USCIS stated:

Since the last extension of Nicaragua's TPS designation, Nicaragua has experienced a series of environmental disasters that have exacerbated the persisting disruptions caused by Hurricane Mitch and significantly compromised Nicaragua's ability to adequately handle the return of its nationals. Nicaragua suffered from heavy rains and extensive flooding in October 2014, May 2015, and June 2015. Significant earthquakes struck in Nicaragua and off its coast in April and October of 2014. Between early May and late July 2015, the Telica volcano erupted 426 times, causing respiratory problems in neighboring communities. Much of the country is suffering from a prolonged regional drought, which, combined with the coffee rust epidemic in Central America, has negatively impacted livelihoods and food security.

With respect to Nicaragua, the CIA reports:

Nicaragua's infrastructure and economy — hard hit by the earlier civil war and by Hurricane Mitch in 1998 — are being rebuilt, but democratic institutions have weakened under the [Daniel Ortega-Saavedra] administration as the president has garnered full control over all four branches of government: the presidency, the judicial, the National Assembly, and the Supreme Electoral Council.

Nicaragua is "the poorest country in Central America and the second poorest in the Western Hemisphere." Notably, however:

The Dominican Republic-Central America-United States Free Trade Agreement has been in effect since April 2006 and has expanded export opportunities for many Nicaraguan agricultural and manufactured goods.

In 2013, the government granted a 50-year concession with the option for an additional 50 years to a newly formed Chinese-run company to finance and build an inter-oceanic canal and related projects, at an estimated cost of $50 billion [although the] and canal construction has not started.

By the standards under which the TPS designations of El Salvador, Honduras, and Nicaragua had been extended, there are tens of countries in the same (if not worse) shape, none of which have been granted TPS. So why have TPS designations for these three countries continued?

The simplest answer is politics. According to the Congressional Research Service, an estimated 195,000 Salvadorans currently have TPS status, as do 57,000 Hondurans, and 2,550 Nicaraguans. Many aliens who initially had TPS have subsequently obtained immigrant status, and some have even become citizens, creating a constituency for their fellow nationals. Further, over the course of decades, aliens with TPS have established business and personal relationships within their communities, and many have had children who are United States citizens. As those relationships and children have grown, aliens with long-term TPS have gained political power in this country, notwithstanding the fact that they are not eligible to vote.

There are certainly exigent circumstances that militate in favor of the granting, for a brief period of time, protected status to the nationals of countries in the wake of significant natural disasters and or civil disorder. The creation of a quasi-permanent, decades-long benefit for the nationals of a country designated for TPS, however, actually makes it less likely that the United States will extend such protection in the future. Specifically, if the president and the secretary of Homeland Security believe that the designation of a country for TPS will have a "ratchet effect", by which large populations of foreign nationals will remain in the United States indefinitely, they will be wary of extending that protection except in the direst of circumstances. This is particularly true if they were to conclude that there would be a political cost to be paid for the eventual termination of a TPS designation.

Congress needs to limit the authority of the secretary to extend TPS to ensure that it is used properly and effectively in the future. The designation of a country for TPS by the secretary should be, as an initial matter, an emergency act. Therefore, section 244 of the INA should be amended to make such designation effective for no more than one year. At the end of that year, any one-year extension (and any extension thereafter) should be presented as proposed legislation to be voted on by Congress. This scheme would give Congress the opportunity to consider continued extensions annually, and ensure that the system is not abused.

If such an amendment were to be made, it must be done quickly. TPS has been extended for Honduras and Nicaragua only through January 5, 2018. It has been extended for El Salvador only through March 9, 2018. This means that the 60-day period for review of TPS for Honduras and Nicaragua must begin by November 6, 2017, and for El Salvador by January 8, 2018. The secretary could, however, extend the period of designation for those countries by six months, giving Congress the opportunity to act.

The administration indicated that it plans on limiting TPS abuses when in May USCIS extended the designation of Haiti for six months, through January 22, 2017. In the Federal Register notice for that extension, the agency "encouraged [TPS beneficiaries] to prepare for their return to Haiti in the event Haiti's designation is not extended again, including requesting updated travel documents from the Government of Haiti." The review period for that designation must begin no later than November 23, 2017. Termination of the TPS designation for Haiti will signal that the Trump administration plans to be less generous and more rigorous in reviewing extensions of TPS designations than its predecessors have.

Expect the debate over this issue to heat up as those extension dates near. You will likely see heart-rending stories in newspapers about the potential separation of families, and read questionable economic analyses concerning the cost to the American economy were TPS for El Salvador, Honduras, and Nicaragua to expire. Congress and the president must act dispassionately, however, if TPS is to be truly effective and "temporary" in the future.