As is well-established, online incitement to violence by extremist groups is viewed as a significant homeland security matter because urging others to kill for a social cause has proven so tragically effective. This concern has usually focused on ISIS, but at least two recent arrests in the United States suggest that some activists among those opposed to President Donald Trump's immigration policies are radicalizing as anti-government extremists, and inciting others online to violence. Here's what we know so far:

On August 3 in Texas, federal agents arrested a DACA student who reportedly is under FBI investigation for "threats of bomb-making" and was listed in a government database of potential threats. Sergio "Mapache" Salazar, an 18-year-old brought illegally into the United States at age two, was among activists occupying a makeshift protest camp outside a San Antonio-based U.S. Immigration and Customs Enforcement (ICE) bond and processing facility, in part calling for the agency's elimination. It was with some irony (and cause for anger) that ICE agents arrested Salazar on an immigration detainer based on denial of his DACA renewal application a day earlier.

Friends, families, and immigration attorneys strongly denied any wrongdoing by Salazar and accused ICE agents of taking retribution on activists opposed to them. However, in light of information about other suspected activity attributed to Salazar, the immigration beef now seems to have been a means of getting Salazar off the streets while the FBI continues a national security investigation. One clue probably was inadvertently provided by Salazar's own attorneys of the legal advocacy group RAICES. In a press release, the organization disclosed that FBI agents repeatedly tried to interview him and at one point told him "they had a search warrant for his cell phone based on accusations ... related to impeding an officer and threats of bomb-making."

San Antonio FBI declined a CIS request for comment; bureau policy is to not confirm or deny ongoing investigations. And no criminal charges have been filed related to the national security investigation referenced by RAICES. But there are other clues that Salazar's arrest probably was not related to simple legal protest activity as purported, nor to his immigration status. San Antonio Express-News reporter Guillermo Contreras quoted unnamed "law enforcement sources" confirming to him that Salazar was the subject of the FBI's Joint Terrorism Task Force because of an intelligence referral by the Texas Department of Public Safety. As the name suggests, FBI JTTFs only get involved when some kind of terrorism threat is indicated. RAICES and Salazar's father told local media that JTTF agents had been surveilling the Salazar home for a month prior to the August 3 arrest. In its own statement about the Salazar arrest, ICE noted that it prioritizes "individuals who pose a threat to national security". The ICE statement continues: "Target information is based on intelligence-driven leads." It then hinted where some leads might have come from: "This may include open source information." Indeed, Salazar's father told local reporters in San Antonio that FBI agents questioned Salazar about his social media activity.

More on any national security investigation is likely to emerge about the FBI's interest in Salazar at a tentative August 22 detention hearing in Texas, at which ICE lawyers are expected to present reasons why Salazar should remain behind bars. 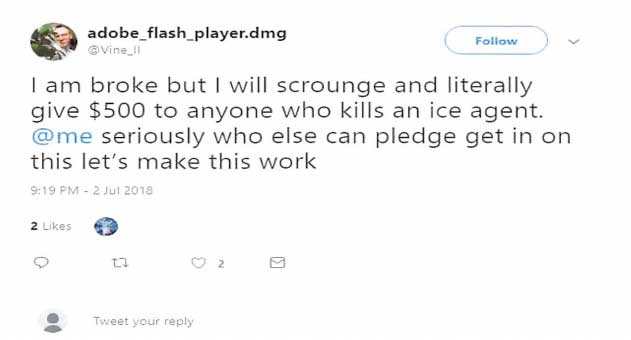 On August 9, less than a week after Salazar's arrest, FBI agents arrested 33-year-old anti-ICE activist Brandon J. Ziobrowski on federal charges related to a posting on Twitter in which he offered $500 to "anyone who kills an ICE agent. @me seriously who else can pledge get in on this ... let's make this work." (Two people "liked" this message; the account has since been suspended.) An arrest warrant affidavit and Department of Justice press release say Ziobrowski's alleged tweet to his 448 followers was designed to encourage violence and the murder of federal law enforcement agents.

Ziobrowski created his Twitter account nearly a decade ago, but this year began showing signs of what appeared to be increasing radicalization and extremist thinking about police officers and then ICE agents. According to the indictment and arrest warrant affidavit, the offer of $500 in hit money was the culmination of extremist thinking. For instance, the documents describe a February 24, 2018, tweet in which he stated: "Guns should only be legal for shooting the police like the second amendment intended." In another posting on a different online platform hosting 42 people, he stated, "F--- this police state shooting a cop should get you a medal."

In March 2018, the indictment alleges, Ziobrowski began tweeting threatening messages against ICE agents. In response to a tweet from an ICE Field Office Director regarding the fact that ICE officers put their "lives on the line to arrest criminal aliens", Ziobrowski posted a message that read: "Thank you ICE for putting your lives on the line and hopefully dying I guess so there's less of you?"

By themselves, these two publicly known arrests, reflecting a perceived probability of online incitement to violence for a social cause, do not present conclusive evidence of a growing trend in anti-government domestic terrorism on the left side of the political spectrum. But the reportable circumstances surrounding these cases do not seem isolated, either. According to the Ziobrowski indictment, other people "like himself" also were on social media platforms calling for ICE agents to be killed at the time. None of this social media activity is publicly revealed, of course. But online incitement of this variety evidently had been noticed to an extent that the U.S. Department of Homeland Security's Current and Emerging Threats Center is now routinely searching for it online, the Ziobrowski indictment indicates.

The indictment suggests that counter-terrorism investigators are aware that these other exhortations to murder government officials are posted anonymously and need to be tracked to those who put them up. And, in fact, initially the alleged Ziobrowski postings were anonymous until law enforcement worked to connect them to a real person.

Not so much in another publicly known instance, according to a report, wherein the protest group Occupy Wall Street posted a tweet in June 2018, explaining "What To Do If You Encounter An ICE Agent." It showed cartoon-like comic book frames depicting a mother fighting ICE agents trying to take possession of an unconscious child: "grab the ICE agent from behind and push your knife into his chest with an upward thrust, breaking through his sternum," one of the frames explains. Another frame urged perpetrators to "pull out his still beating heart" and to hold it out for all other agents to see." No one was arrested in that anonymized instance of apparent incitement.