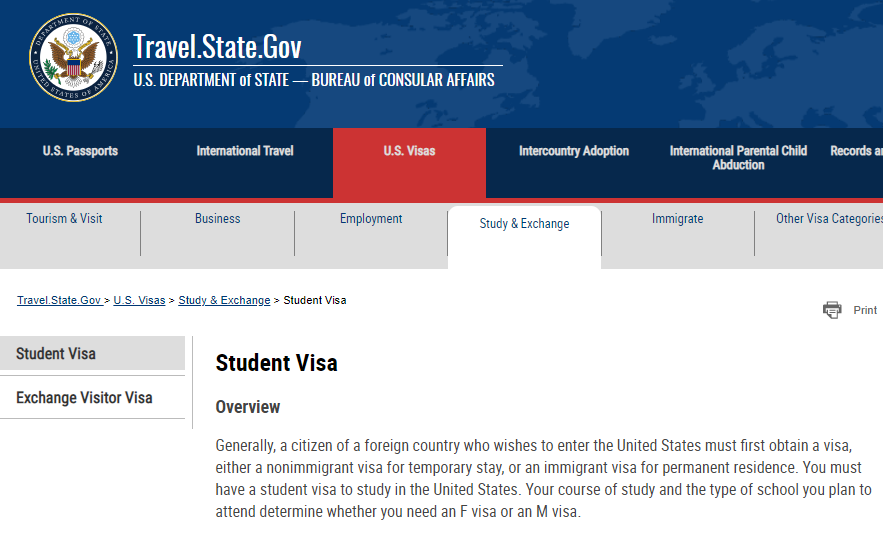 Last week, after the Trump administration proposed new rules managing visas that entitle foreign students and cultural exchange visitors to study or work in the United States, many in the media punditocracy quickly expressed outrage or quoted others that the proposed changes are mean-spirited, unfairly burdensome, and otherwise unhealthy.

But in the speedy leaps to judgement, much of the selective public reporting has bypassed some of the most pertinent information about the new rules: their national security purpose, which is to reduce the threats of espionage and terrorism.

The proposed changes to F-1 and J-1 visa management are described in the 256-page Federal Registry posting, up for public comment here through October 26, so knowing all of what's in it kind of matters.

The gist of the changes is that F-1 visas for foreign students (more than a million admissions in 2019) and J-1 visas for exchange visitors (611,373 in 2018), such as researchers at academic institutes, would become subject to two- or four-year expiration dates for the first time, replacing the currently laissez-faire, essentially open-ended schedules that have given rise to fraud, espionage, and terrorism. The rules would apply to students from 59 countries selected by a calculus of potential national security threat or the probability of abusing the visas as stepping stones to permanent immigration, legal or not.

By design, homeland security planners seek to exploit the fact that a great many visa recipients will need more than two or four years under the new regimen, since education programs often last longer. To secure that extra time, applicants will for the first time be forced into offices with DHS immigration officers as they apply for extensions they need to complete programs. They would provide biometric information and have face-to-face interviews with immigration officers. They would have to present evidence of past progress in their educational endeavors as well as demonstrate future need. They'd have to provide new specific completion dates for programs that might have changed. Throughout it all, they become subject to security risk evaluations.

The DHS proposal language succinctly explains its goals, whether or not international media chooses to report them: "These changes would ensure that the Department has an effective mechanism to periodically and directly assess whether these nonimmigrants are complying with the conditions of their classifications and U.S. immigration laws, and to obtain timely and accurate information about the activities they have engaged in and plan to engage in during their temporary stay in the United States."

By contrast, under the current system, no such reconnections to the American government are required. The system is as elastic as students and the sponsors who benefit from the billions in tuition or affordable labor want it to be, with no national security evaluations, check-ins with trained DHS officers, or proof of need for years stretching even into decades. That's always been a recipe for overstay abuse, fraud, and worse: terrorism and, especially of late, espionage.

The way the programs are run now, the proposal explains, undermines U.S. national security "due to reduced opportunities for direct vetting of foreign academic students by immigration officers. But it also places research universities and the nation at risk for economic, academic, or military espionage by foreign students and exchange visitors."

The more restrictive two-year visa expirations — with the chance to apply for time extensions before a DHS immigration officer — would apply to applicants from countries whose citizens tend to overstay their visas at a higher than 10 percent rate, for instance sub-Saharan African countries like Nigeria, Cameroon, and the Democratic Republic of Congo.

As the State Sponsor of Terrorism List are countries determined by the Secretary of State to have repeatedly provided support for acts of international terrorism, DHS believes it is appropriate to apply additional scrutiny to those who were born in these countries ... to ensure that these aliens are complying with the terms of their admission and that they do not pose risks to the national security of the United States.

Unlike some of the media reporting, the rationale for this is hardly based in hyperbolic conspiracy theory. F-1 visas drew attention when it was discovered that two of the 1993 World Trade Center bombers had overstayed their visas. But their sharpest focus as a national security vulnerability came with the 9/11 attacks, when it was discovered that Saudi hijacking pilot Hani Hanjour used his F-1 visa to enter the United States for an English language program he never actually attended while he prepared for his attack role.

Despite efforts to tighten security vetting on the F-1 student visas after 9/11, more bad actors over the years still managed to enter the United States on them and conducted, plotted, or supported terrorist attacks, though there is debate as to how serious a threat the visa is in light of how many are issued annually.

Perhaps the most immediate catalyst for the administration to propose rule changes can be found in the steady recent cadence of espionage arrests and investigations at academic institutions across the United States.

Section III's "Risks To The J Classification" of the proposed rule change (starting page 60535) explicitly addresses the problem. It points to "multiple examples" in very recent months where Chinese People's Liberation Army spies posing as research scholars pilfered sensitive U.S. technologies while at Harvard university, the University of California, and other academic institutions.

Indeed, the FBI is in the midst of investigating and arresting dozens of Chinese spies who fraudulently obtained J visas and also some F visas and then either stole material or essentially recruited and bribed American professors into giving up their knowledge to China. (See also this, this, this, this, this, and this.) This national security problem came to be seen as so damaging to the country that President Trump in May felt compelled to cancel thousands of visas held by Chinese graduate students and researchers.

Still, China being the top contributor of students and researchers to American universities, the visas for them would come with four-year restrictions (with opportunity for renewal as long as they check in and submit to review).

In light of these ongoing espionage cases involving the J and F visas, nothing about the proposed restrictions comes off as particularly draconian, onerous, expensive, or even very time-consuming. The visa programs are not to be eliminated, the numbers granted not capped. Opportunities for renewal and extension are baked into the new cake.

The new requirements seem fair for any sovereign country that has enemies in the world — and just about every country on the planet would comprise that list. In a statement about the wanted changes, Deputy DHS Secretary Ken Cuccinelli could not be described as a wild-eyed fanatic in describing their simple purpose: the new regulation would "prevent foreign adversaries from exploiting the country's education environment."

Any nation is interested in occasional reassurance that foreigner strangers, who are allowed in for extended time periods on their own recognizance and without any oversight, simply follow the rules and cause no harm.

Putting up with extension applications once every two years or at the end of four years should present no problem for any honorable student or exchange visitor who has nothing to hide and is happy to tell the truth.