Migrants in Mexico Are Getting Impatient

Frustrated that Biden hasn't opened the border fast enough, Cubans and others talk of simply rushing over 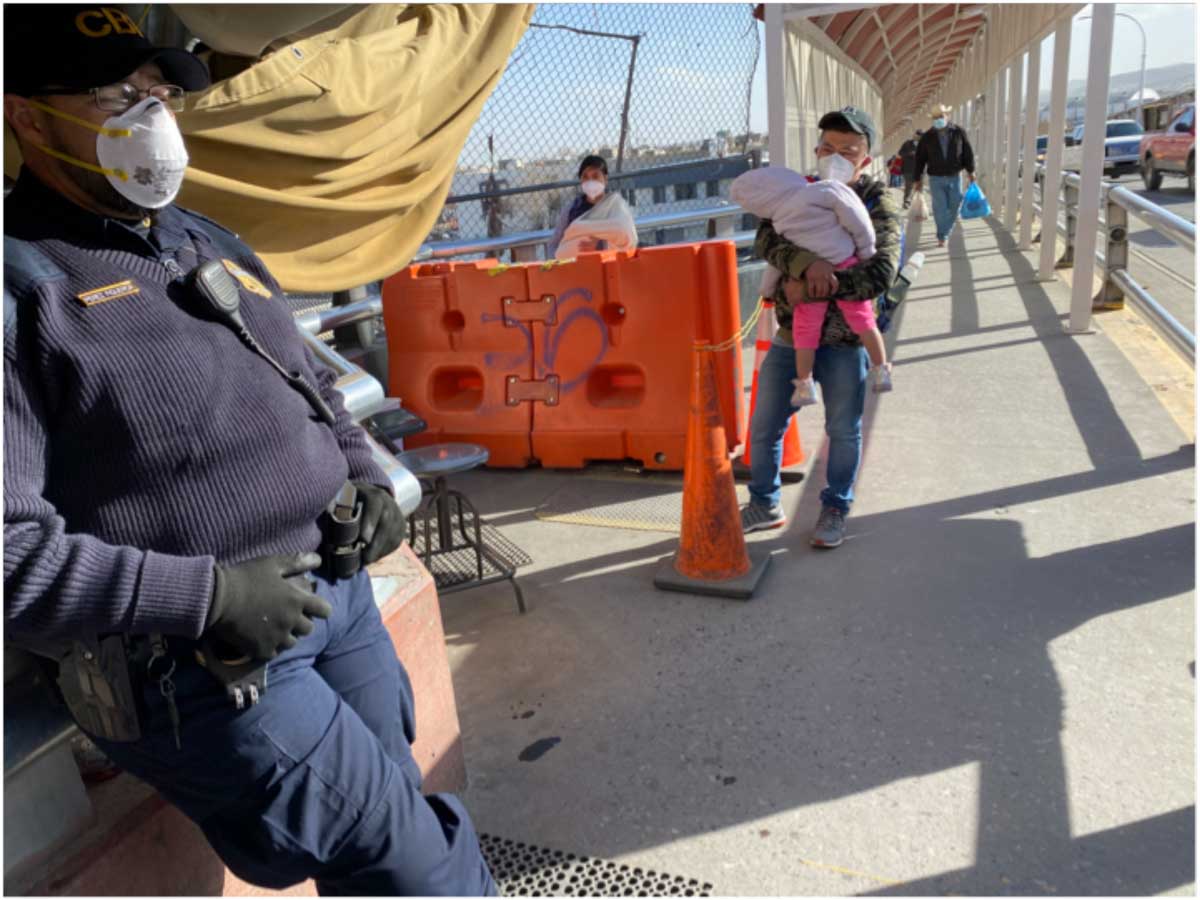 A migrant family halted at the Paso del Norte International Bridge from Juarez to El Paso. The answer is still "No" from U.S. Customs and Border Protection. Photo by Todd Bensman.

CIUDAD JUAREZ, Mexico — Hawking Spanish-language newspapers on a curbside kiosk at the mouth of the Paso del Norte International Bridge leading over to El Paso, Cuban migrant Victor Manuel confessed that he knows of a plot by more than 1,300 of his countrymen.

The Cuban migrant community of Juarez, impatient and frustrated that President Joe Biden hasn't actually let them cross into the United States, is planning to charge en mass — all at once — and force their way over a lightly patrolled land border zone if they don't get what they want after January 29, Manuel told the Center for Immigration Studies. He refused to say where.

At the beginning of January, as many as 400 Cubans chanting "Biden! Biden! Biden!", required by the Trump administration's "Migrant Protection Protocols" (MPP or Wait in Mexico) to await their asylum claims on the Mexican side of the border, along with 70,000 other migrants, charged over the international bridge demanding to be let in based on the new president's now-fulfilled vow to end the policy. But U.S. Customs and Border Protection (CBP) officers in riot gear easily blocked the assault, tactically aided by the narrow confines of the bridge. 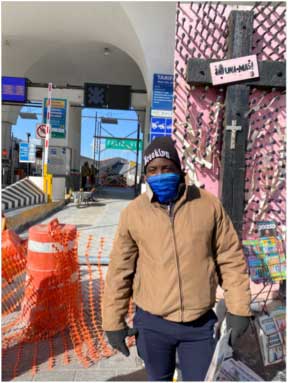 Victor Manuel of Cuba at his newspaper stand on the Juarez side of the international bridge to El Paso. Photo by Todd Bensman.

As the weeks passed with no material change for them, though, the Cubans and Central Americans in Mexico have become more restive and frustrated than ever, Manuel and other Cuban migrants here said. That's because the newly installed Biden administration has not actually implemented any logistical plan to bring them over. They're supposed to get U.S. government word around January 29 about what that plan actually is.

But if that word doesn't satisfy many Cubans and Central Americans in Juarez, "They are going to do something very interesting, and it's not going to be at the bridge this time," Manuel said, based on the chatter in one Cuban social media group of 1,300 members and in another one of a thousand Central Americans who may join in the charge. "If it turns out that there is no hope of crossing, it [a mass charge] will happen again. They don't want to do anything wrong, but they are tired of being in Mexico."

At least on this section of the U.S.-Mexico border, such talk reflects broader sentiment among migrants that real change appears to be lagging early Biden administration policy pronouncements about ending Trump's deterrence-based policies like MPP, ending deportations for 100 days, and generally embracing all illegally entering migrants.

After visiting both sides of the El Paso-Juarez divide and interviewing U.S. Border Patrol agents and many migrants, the Center for Immigration Studies this week found that, while migrants who are clearly motivated by Biden's recent moves are attempting illegal entries in ever-higher numbers right now, Border Patrol around here is still returning most apprehended Spanish-speaking migrants to this vast northern Mexico city of 1.3 million under Trump's pandemic-related instant "Title 42" removals and also, still, the MPP. CBP is stopping migrants on the bridge and turning them around. Mexican national guard and immigration also appear to be patrolling and blocking per usual on their side as though Trump were still in office threatening trade tariffs. 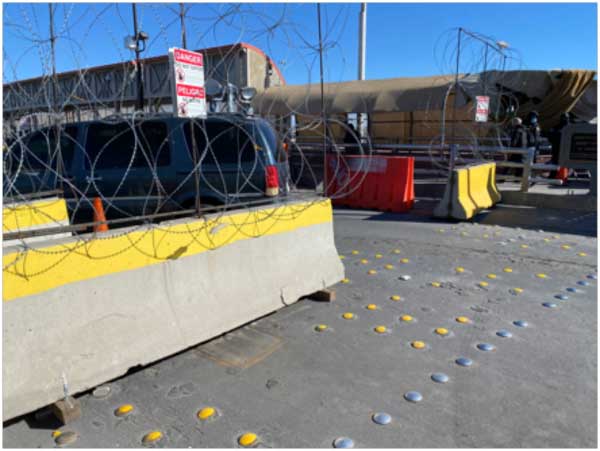 It's very early still, of course, in the Biden immigration agenda. But a number of Border Patrol agents working a very busy night shift near a highly trammeled gap in the border wall said nothing has changed despite orders from Washington, D.C.

One agent noted there are actually two governments of different minds and intentions.

"Biden is the president, right ... but military and homeland security ... they don't look at these executive actions as the same thing. We do whatever to protect the homeland. A lot of Trump's rules are still staying."

Border Patrol in this sector, for now, is not interpreting Biden's deportation moratorium in the same way as some in Washington, for instance, this Border Patrol agent said. Here on the border, "deportation" is not the same as instant "removal" of the sort that he and his colleagues are carrying out on a daily and nightly basis under Title 42 and MPP. CIS witnessed one Title 42 expulsion as two Border Patrol agents, a migrant of unknown origin between them, marched him up and over the bridge and returned without him. Neither would say much, except to confirm that they had carried out yet another Title 42 expulsion. The migrant would probably try his luck again soon enough.

In Juarez, word of all this travels fast, prompting economic migrants who can't afford smuggling fees to wait in place for any opportunity to get in and claim asylum on grounds of government persecution. Expectations are sky-high that they'll never have to leave, that some sort of permanent citizenship is coming their way. 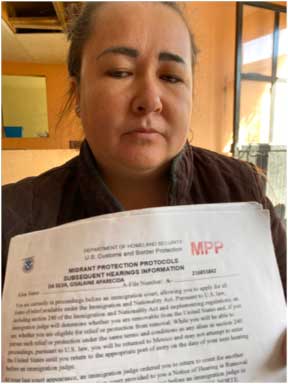 Brazilian migrant Gislaine Aparecida da Silva Batista was pushed back under MPP a year ago. She and her 10-year-old daughter have been staying in a shabby but clean Juarez migrant shelter with 20 other migrants from Guatemala, Cuba, and Honduras, all MPP push-backs. She said her asylum hearing is still on next month, but that all she wants is to wait for it inside the United States, where she senses that she'll never have to leave no matter what the outcome of that asylum claim.

What if her asylum claim about Brazil is rejected by a U.S. immigration judge? No matter, Gislaine said. She'll not be going home based on what "the Internet" says now about President Biden.

A Guatemalan and a Cuban, who said they could not afford the $4,000 smuggling fee to cross illegally, reiterated their firm belief that their time in Mexico is rapidly coming to a close because of the new American president.

Releases from Detention of Extra-Continental Migrants Despite Criminality?

It remained unclear exactly whether non-Spanish-speaking "extra-continental" migrants from other parts of the world, who do get detained because Mexico has never accepted them under MPP, are being repatriated to their home countries or instead are now being released from detention into the U.S. under the newly announced deportation moratorium.

But one homeland security supervisor in the El Paso sector told CIS that extra-continental migrants such as those from the Middle East, or four Pakistanis and an Afghan caught this week, are indeed being quick-released into the country from El Paso area detention centers, although this could not be independently observed or confirmed. A number of migrant advocacy resettlement groups in the region were preparing to accept such migrants to help them relocate after release, according to local media reports last week.

The supervisor said such migrants were indeed being released wholesale and despite flagrant evidence of fraud, criminality, and Islamic extremism among them. The releases have demoralized the front-line officers, this official said.

CBP declined to provide CIS with a briefing or comment on how the new deportation moratorium policy was being implemented with regard to extra-continental non-Spanish speakers, citing a long process of approval that could not be achieved in a timely manner. 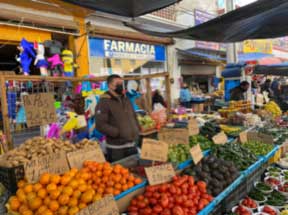 Cubans have found ways to earn their keep in the open markets of Juarez. Photo by Todd Bensman.

Little else seemed different to other agents in the field, except that several said they are busier than ever chasing down "runners" and finding trucks, U-Haul trailers, and stash houses crammed with illegal Cubans, Haitians, Mexicans, and Central Americans looking forward to the new Biden way.

The migrants respond with disbelief, tears, and, often, anger when one agent said he tells them they're being promptly returned to Mexico. The Cubans are especially angry and aggressive upon hearing word that nothing had changed, as though they had been victimized by some kind of cruel bait-and-switch. Cubans often assault Border Patrol agents upon news of their returns or spew verbal venom at them, three different agents said.

Meanwhile, on the Paso del Norte bridge, migrants of different nationalities keep showing up at the U.S. line asking to pass through in the name of President Biden. Last weekend, more than 100 Central Americans showed up with their belongings and children, but were blocked behind a mobile barbed-wire barricade that can be moved to close the bridge and then withdrawn.

On Monday, CIS witnessed a Central American man and a woman at the still-open barricade, both holding sleeping children, stand in teary-eyed frustration at the bridge's international line, two CBP officers a few feet into American territory refusing to let them pass for lack of documents. They'd been there for a half hour and seemed determined to stay much longer when CIS left.

"They can do whatever they want to do on the Mexican side," one of the officers said. "They can stand there all day. They're not coming in."

In a short but notorious gap in the border wall just west of El Paso, right where the wall ends and a desert mountain rises, locally known as the "Anapra Gap", CIS spoke to a Mexican immigration officer guarding a 20-foot segment of it in a pickup truck, along with members of the Mexican national guard who had built fires at intervals up the mountainside so they could warm themselves against the dark desert cold. Speaking to CIS over a line that is invisible at this spot, the Mexican officer explained that nothing has changed on their side either; their orders are to prevent passage.

While he was explaining this, a squad of Mexican national guard carrying M-16 rifles filed down the mountain out of the dark with a group of six migrants they'd caught somewhere. The Mexicans lined them up against their side off the American border wall where it started a few feet away, took photos, then piled them into a vehicle to be dropped off somewhere else in Juarez.

Real change in how Border Patrol and the Mexicans do their jobs is likely coming in the weeks and months ahead, but frustration about how words in Washington translate into actual deeds is boiling in Juarez.

Cubans eking out a living selling fruits and vegetables in a bustling outdoor market said they were furious at the lack of movement. Several declined to provide full names.

"Sometimes we feel like we're going to have to just push through" the border, one vegetable-seller said. "Tell the people back in the United States that we are doing it, we are doing it because we are frustrated."