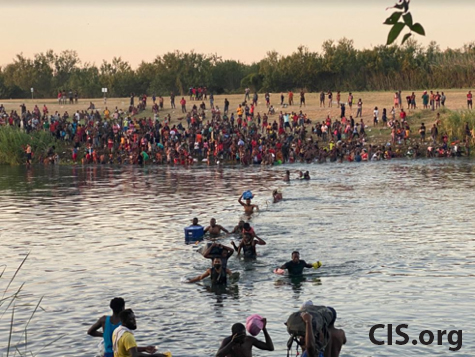 Mostly Haitian migrants moving in a supply line back and forth over the Rio Grande between Ciudad Acuna and Del Rio. Photo by Todd Bensman.

In October 2020, the national news media and liberal Democrats practically regaled the release of a U.S. Department of Homeland Security annual “Threat Assessment” for its conclusion that white supremacists posed the “most persistent and lethal” domestic terrorism threat to America. Few challenged the DHS report’s credibility that month before the presidential election, no doubt because it confirmed a Democratic political narrative that four years of Donald Trump had fueled a rise of violent white nationalist racism.

Entirely ignored in this credible report, however, was an analytical prediction that seems eerily prescient now:

The DHS assessment predicted that a “mass migration event from Cuba or Haiti” was likely coming in 2021 and, together with huge numbers from Central America and nations around the world, could cripple the “immigration system,” “undermine our ability to effectively secure the border,” and unnecessarily cause the release of “dangerous criminal aliens and absconders who may then commit additional crimes.”

[Read the rest at CD Media.]