"We are able to identify and apprehend them and ensure that they do not remain in the United States."

U.S. Department of Homeland Security Secretary Alejandro Mayorkas this week asserted that suspected Islamic terrorists can and have crossed the porous southern border for years, a claim that major media organizations and lawmakers widely pilloried as a fear-mongering falsehood when President Donald Trump and his administration made the same claim in 2019. 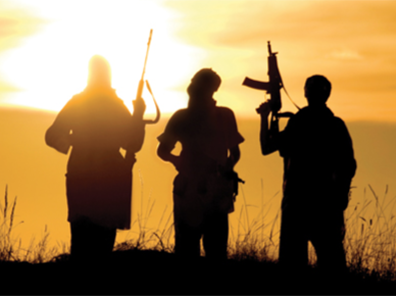 Mayorkas' comments that migrant suspects on U.S. terrorism watch lists cross the border came amid the latest round of controversy about the terrorist infiltration claim, which began when a delegation of 13 Republican lawmakers, returning from the border, relayed that Border Patrol agents told them that three Yemeni migrants and a Serb on the U.S. terrorism watch list had been apprehended since October. Major media such as ABC News and the Washington Post quickly published stories, largely featuring Democratic lawmakers and self-described border security experts lashing out at House Minority Leader Kevin McCarthy (R-Calif.) and other delegation members as lying and re-disseminating a disproven conspiracy theory.

"Weird as the Chairman of the subcommittee on Intelligence and Special Operations and a border state member of Congress haven't heard anything about this," tweeted Rep. Ruben Gallego, a Democrat who represents the Phoenix area. "Gonna ask for a briefing. Pretty sure he is either wrong or lying."

But all such talk disappeared mid-stride after a routine weekly U.S. House Homeland Security Committee hearing Tuesday March 16. During it, the Democratic DHS appointee Mayorkas acknowledged that suspected terrorist migrants routinely travel to the southern border. The remarks were stunning in that they came from the Democrat side of the aisle, rather than the usual Republican side.

"A known or suspected terrorist — KST is the acronym that we use — individuals who match that profile, have tried to cross the border, the land border, have tried to travel by air into the United States, not only this year but last year, the year prior and so on and so forth," Mayorkas testified. (Listen to his comments here, at about the 1:48:00 mark.)

Mayorkas then issued another remarkable revelation. He disclosed that the American homeland security establishment has fielded a "multi-layered security apparatus" that has been in place at least since the 9/11 attacks to catch and neutralize the heightened threat of this category of land border-crossing migrants from countries of terrorism concern.

"And it is because of our multi-layered security apparatus, the architecture that we have built, since the commencement of the Department of Homeland Security, that we are in fact able to identify and apprehend them and ensure that they do not remain in the United States."

"And so we actually deny them entry based on our intelligence and based on our vetting procedures, which have only grown in sophistication throughout the years."

When asked how many KSTs had crossed and if any had gotten through and disappeared, Mayorkas said he did not know but, again remarkably, committed to providing a classified briefing on a threat that many in his party have long and very publicly regarded as a debunked conspiracy theory.

A Claim of Terrorist Border Infiltration Suddenly Coated in Teflon

The Mayorkas acknowledgements that suspected terrorists cross and that U.S. homeland security operations catch and neutralize them are notable in several ways. For one, the comments stand in sharp contrast to the fierce reaction that broke out when Trump administration officials, such as former Acting DHS Secretary Kirstjen Nielson, made the same assertions. For several months, media organizations relentlessly posted "fact-check" stories featuring critics who attacked the Trump administration claims as demonstrably fraudulent canards when the demanded classified proof of them was not forthcoming or when the administration mistakenly mislabeled some of the data it did release.

The steady stream of televised and print challenges to the Trump claims of terrorist suspect border crossings only ended after nearly three months when the administration stopped discussing the matter.

Yet the Mayorkas acknowledgement of the terrorist border infiltration threat abruptly contradicted his own party's lawmakers and operatives just as they were mounting familiar credibility attacks aimed at the returning Republican delegation. The Mayorkas comments forced a shift in tactic wherein Mayorkas' comments were cited as evidence that terrorists may well be coming after all, a CNN "fact check" reported; they just weren't "rushing the border" as the Republicans ostensibly said. Or that, being on a terrorism watch list was not a very serious indicator of possible trouble.

Who Is Right? The Republican Lawmakers and Mayorkas, or Democratic Party Rejectionists?

My new book, America's Covert Border War: The Untold Story of The Nation's Battle to Prevent Jihadist Infiltration, extensively details assertions that terror-watch-listed migrants are routinely apprehended — just as Mayorkas and the Republican delegation claimed. And the book also describes at great length for the first time the "architecture" and "multi-layered security apparatus" that Mayorkas revealed as having neutralized many prospective border-infiltrating terrorists.

America's Covert Border War is a history of how the U.S. homeland security establishment has caught terrorist suspects and just how it neutralizes them, to include who, how often, and how the professionals see the threat.

I wrote the book to serve as a reference guide for contentious moments just like these, and so that lawmakers on either side of the aisle no longer have to feel "surprised" that migrants on terror watch lists cross that border and what that means. I wrote the book also to show that fights over the threat are not necessary because both Republicans and Democrats like Mayorkas actually agree behind the scenes about what the threat is and that the American covert border war will remain intact.

Prior to Mayorkas, President Barack Obama's DHS Secretary, Jeh Johnson, proved that he, too, understood that terrorists can and did cross that border. As revealed in the book, Johnson went to great lengths to ensure that America's covert border war, the one Mayorkas described as "architecture", was healthy and strong.

Democratic rejectionists and those who respond to congressional delegation reports from the border with knee-jerk criticism do not operate from the same position of knowledge as Jeh Johnson, Alejandro Mayorkas, and Donald J. Trump.