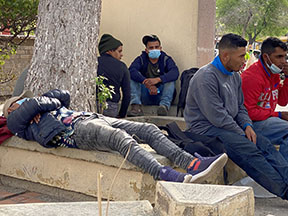 Migrants resting after being returned to Acuna, Mexico, by the Border Patrol. Photo by Todd Bensman.

PIEDRAS NEGRAS, Mexico — When Anderson Castaneda left his native Honduras in October 2020, betting that a victorious President Joe Biden would open the borders wide, this medium-sized northern city of 165,000 across from Eagle Pass, Texas, was hardly his first choice.

Nor even a close second or third. In fact, Castaneda had never even heard of the place until after he’d first tried on for size the crowded, dangerous, and cartel-controlled crossing boom town of Tijuana, then Mexicali and Nogales after that didn’t work out.

Cartel violence either spooked him, or Border Patrol on the U.S. side caught and returned him under the Trump-era pandemic emergency expulsion policy still in effect for single men like him. So Castaneda started shopping for more forgiving Mexican staging and American reception areas, hopscotching all along the southern border until he found Piedras Negras, across the Rio Grande from Eagle Pass. The city’s name translates to “black stones”, for nearby coal deposits.

“According to all of my countrymen, Piedras is easier; there’s a lot of criminal elements in the other ports — kidnappings, murders ...” he told CIS six days after arriving and trying unsuccessfully to cross twice. “It’s just word of mouth from people I run into.”

Evidently, he and a number of other aspiring illegal immigrants in the area are among thousands tapping a kind of black market “shopping” network that, in this time of inconsistently applied American lenience, identifies U.S. border sectors that reportedly work well for illegal immigrants.

Such shopping would seem a natural outgrowth of inconsistent application of policies across the southern border since the Biden inauguration and various executive orders reversing Trump administration policies. These have given rise to widespread confusion about what the Americans are doing on any given day and in which sectors.

Border Patrol agents and their quarry alike often can find no rhyme or reason behind what is allowable on any given day or why, or where. For instance, whereas sometimes the Americans accept some immigrant family units or unaccompanied minors, they return others to Mexico. While in some sectors, Border Patrol ends expulsions for everyone, even the singles, the gift is taken back for no known reason on another day. While some nationalities are granted admittance one day, other nationalities are returned to Mexico.

Piedras Negras and Ciudad Acuna, about 50 miles north, are the biggest Mexican population centers across from a U.S. Customs and Border Protection jurisdiction called the Del Rio Sector, one of nine along the southern border. In normal times, the Del Rio Sector qualifies as relatively staid compared to the highly trammeled Rio Grande Valley Sector, at the southern tip of Texas, or the El Paso Sector, across from the metropolis of Juarez.

But Border Patrol apprehensions in the Del Rio Sector are up sharply since the election, especially among families from Haiti and Cuba, who found U.S. acceptance, and quick out-processing for resettlement by bus throughout the country. They clearly have reported all of this good news on social media and cell phone to others shopping the border that Piedras Negras and Acuna are definitely the “in” places to be.

The number of family units encountered by Border Patrol in the Del Rio Sector leapt from 672 in November to 2,269 in February, CBP data shows. They were among 8,700 total encounters with illegal immigrants of all kinds (including single adults and unaccompanied minors) in November, which jumped to 11,063 in February, not including those who evaded Border Patrol. But March in Del Rio Sector is on track to become a banner month, with 14,071 encounters in just the first three weeks, according to unfinalized CBP data obtained by the anti-cartel website Tripwires and Triggers.

“Jump to the switch of administrations and we saw an immediate surge of 340,” she said of one particularly busy day. “It’s been a steady climb to where we are 100 or 150 a day now. They’re all going into the U.S.”

She told CIS that many of the immigrants she serves are Haitian families who had not been across the river in Acuna before, but suddenly showed up from other parts of the border. They would have used a humming Creole-language grapevine telling other Haitians they’d found a route in.

“A lot of people were thinking they were staying for months on end in Acuna,” Burrows said. “But they definitely were not there. I think people know what they are striving to do and if they don’t succeed the first time they’ll keep trying.”

No Haitian families appeared to be left on the Mexico side, though no doubt more are coming.

Another Gleaming Attribute: Absence of Cartel Interest in Human Smuggling — For Now

These days, with family units accepted in Del Rio and Eagle Pass, most of the remaining aspiring border-crossers in both of the Mexican cities CIS visited seemed to be single adults like Castaneda, who are still being returned under the pandemic expulsion policy.

A number of these single adults said they will stay in Piedras and Acuna — even though Border Patrol returned them — because they keep seeing other singles in their ranks make it past the Border Patrol and into the United States. But they cite other important selling points about the Del Rio sector, too.

For one, violent drug cartels that tightly control smuggling over the Rio Grande elsewhere do not appear to be interested in the business here. The Cartel Del Noreste controls the drug trafficking on the Mexican side these days. But every migrant CIS interviewed last week said they crossed on their own, paying no one and suffering no consequence. Furthermore, while criminal groups and thieves of course prey in the two cities, the immigrants here report relatively few instances of terrible victimizations.

Olbi Orian Dormorel of Honduras said he came to Piedras after suffering fear, victimization, smuggling fee expense, and crossing failure in Tijuana first and then in Nogales. He heard Piedras Negras was the place to go to avoid all that. He hadn’t gotten past Border Patrol in Eagle Pass yet, he said. But he’ll keep trying because the tries cost nothing and he feels fairly safe while he prepares for the try that will prove his lucky one.

“Not all the crossings are easy,” he said. “But after doing border surveillance and word of mouth for the safest, easiest way, I picked Piedras Negras and also because I have lots of friends who got across.”

That circumstance may well not hold for long, as ever more migrants learn about the Del Rio Sector as a hidden illegal immigration gem — the pick of the litter — but also how much money the cartel here may be passing up as it is discovered.

The prospect that Del Rio Sector may suffer the pains of popularity for illicit border-crossing seems almost a certainty so long as President Biden’s beckoning words — about not turning away or deporting immigrants who illegally entered — are heard among aspiring immigrants. And especially so long as they also see processions of large buses filled with tens of thousands of people just like them head into the American interior.