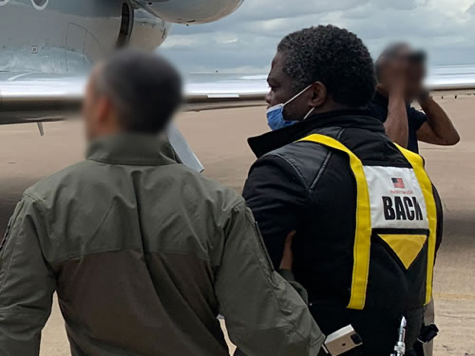 Eddie Yenner Murphy Karpoleh being flown from Saint Paul, Minn., to Liberia on an ICE Air flight in June 2022. Photo by ICE.

President Joe Biden recently gifted the latest “temporary” hall passes to thousands of Liberians who have been living in the United States since two 1990s-era civil wars. He is the sixth president to grant various “temporary” stays of deportation to Liberians.

But this round should not pass without remarking on America’s sometimes naïve penchant for admitting large populations of people from foreign lands of utter barbarity, with no apparent regard for thorough security vetting or protecting the national interest from importing terrible evil. As I write in my forthcoming book Overrun: How Joe Biden Unleashed the Greatest Border Crisis in U.S. History, the biggest number of people ever known to be crossing the southern border are coming from 150 countries other than Mexico and Central America.

Stepping through the ruins of America’s collapsing southern border and other legal admittance processes are thousands of people from deeply-ill nations in Africa, teaming with tribal warlords and vicious armed militias that rape, pillage, plunder, and murder. In fairness, maybe most are actually persecuted victims of these militias, just as they say.

But “Jungle Jabbah” of Liberia was certainly not one of them.

His real name is Mohammed Jabbateh, and he was a resident of Philadelphia for nearly 20 years after arriving from Liberia and claiming asylum in 1998.

He was among thousands of Liberians fleeing the wars and resettling in Pennsylvania. But in the life he left in Liberia, Jungle Jabbah served as a commander of the United Liberation Movement of Liberia for Democracy during that country’s first civil war, from 1989 to 1997. ICE’s Human Rights Violators and War Crimes Center (HRVWCC) finally rooted him out. Investigators found that during his “service”, Jabbateh and his soldiers wantonly murdered civilian noncombatants, sexually enslaved women, tortured and executed prisoners of war, desecrated corpses, and ritually ate their victims.

He would have hearts cut from chests and cooked for his soldiers to eat, according to testimony from Jabbateh’s 2017 immigration fraud trial in Pennsylvania. In one instance, fighters under his command murdered a villager, removed his heart, and ordered the town chief’s wife to cook it, then killed the town chief and forced her to cook his heart.

This was the man who easily lied his way through immigration applications to 20 years of sanctuary as a neighbor to American citizens until ICE’s HRVWCC caught up to him and he landed a 30-year prison sentence in 2019 — at considerable investigative and prosecutorial time and expense to U.S. taxpayers to root him out.

He “committed acts of such violence and depravity that they are almost beyond belief”, U.S. Attorney William M. McSwain said in a 2018 press release announcing the prison sentence for immigration fraud. “This man is responsible for atrocities that will ripple for generations in Liberia.”

Men like Jungle Jabbah are, unfortunately, not exactly rare.

According to the ICE HRVWCC website, since 2003, agents have arrested more than 380 individuals for human rights-related violations, and obtained or facilitated removal orders for 903 “known or suspected” human rights violators from the United States.

As of September 2022, the HRVWCC had more than 160 active investigations into suspected human rights violators and was pursuing more than 1,750 leads of suspects from 95 different countries.

Lately, Pennsylvania’s Liberian war criminals seem to command an outsized portion of ICE interest. In June 2022, they were all over Moses Slanger Wright of Philadelphia.

His past caught up to him only in June 2022, when federal prosecutors in Philadelphia indicted the 69-year-old Liberian for lying all over his refugee and immigration applications for years, the most recent being a final citizenship bid. What was he allegedly lying about so successfully for years since the United States granted him asylum in 2000? During Liberia’s first civil war, from 1989 to 1997, he allegedly served as the “commanding general” in President Charles Taylor’s National Patriotic Front of Liberia.

“Wright either personally committed, or ordered Armed Forces of Liberia troops under his command to commit numerous atrocities, including ... the persecution, murder, and assault of civilian noncombatant Gio and Mano tribesmen, as well as false arrest and false imprisonment of civilian combatants,” the indictment alleged.

Among other Liberians who lied their way into American sanctuary was “General Dragon Master” Laye Sekou Camara, who was among thousands of Liberian civil war refugees who resettled in the Philadelphia region after the West African nation’s wars.

General Dragon Master got into the country in 2011 on an asylum claim and won a green card in 2012. A May 2022 indictment accuses Camara of lying on various immigration forms to cover up the fact that he led a rebel group called Liberians United For Reconciliation and Democracy (LURD), which fought against Taylor in Liberia’s second civil war from 1999-2003.

“The defendant in this case is alleged to have served as a high-ranking general for a rebel group that fought in the Second Liberian Civil War, all the while employing tactics of unimaginable brutality, including the recruitment of child soldiers,” said William S. Walker, special agent in charge of the Homeland Security Investigations’ Philadelphia Field Office, in a press statement.

Forcing Children to Torture and Murder His Victims

Then there was Eddie Yenner Murphy Karpoleh, just deported back to Liberia in June 2022. Karpoleh was “infamous for forcing children to kill and torture” when he commanded a unit of the so-called National Patriotic Front of Liberia, an ICE statement said. Karpoleh also ran a unit in the Liberian National Police Special Operations Division with a telling nickname: “Sons of the Devil”.

Karpoleh got into the United States in a most unusual way, where blame lies squarely on the shoulders of federal authorities. In 2008, federal authorities granted him entry to serve as a defense witness in the Miami, Fla., criminal trial of yet another Liberian war criminal, Roy Belfast Jr., aka “Chuckie” Taylor, the son of the former president Charles Taylor, on torture charges.

Federal immigration authorities let Karpoleh into the country despite easy-to-obtain information that he was a wanted fugitive in Liberia; he’d been living in the Netherlands when the invitation to testify arrived.

Karpoleh immediately fled his hotel room and disappeared. After ICE listed him as a fugitive, he filed for asylum, which allowed him to continue living in the country for years. It would be five more long years before agents caught up with him and an immigration judge ordered Karpoleh removed. 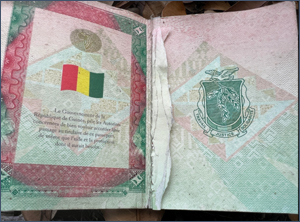 A Republic of Guinea passport defaced and discarded on the Mexican side of the Rio Grande, as found by the author in March 2021. Photo by Todd Bensman.

These Liberians did not even come into the country as complete strangers but, rather, as known applicants for immigration benefits who flew into U.S. airports and could have gone through some small modicum of vetting, like maybe a Google search, that would have turned up derogatory information. But they didn’t, and neither did hundreds of others, according to ICE’s human rights violators investigations unit.

Now consider that I’ve been meeting Liberians en route or crossing the southern border for months who will come in as complete strangers and be immediately admitted by the Biden administration to go anywhere they want.

Most African migrants, who hail from atrocity-ravaged nations, know this administration will let them in without identification and probably no vetting whatsoever beyond maybe a cursory database check after the new arrivals are already in the country on their own recognizance.

I routinely find African passports and ID cards torn up and discarded on the U.S.-Mexico border.

What’s the problem with granting refuge to people fleeing from terrible places like that? My answer is informed by the inescapable fact that even when border flows are relatively low and managed, American homeland security agencies are challenged to discern persecuted from persecutor.