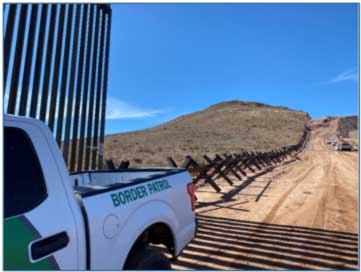 DEMING, N.M. — Just over the horizon from this high-desert town, an order from newly seated President Joe Biden last week halted westward construction of his predecessor's border wall. A mile or so down the line, at a section building eastward to connect with it, construction also ended. The "pause" orders from distant Washington, where "experts" insist border walls don't work, left a mile-wide open corridor here that would have been closed in another month or so.

In the shadow of a last installed panel, a U.S. Border Patrol agent left responsible for covering that mile-wide gap wondered who all these "experts" are who constantly insist walls don't work against illegal immigration and drug trafficking.

"You hear TV, and they would say, 'well the experts say the wall isn't effective,' and I never understood who these experts were," said the agent. "Because all of our data says, you know, 90 percent effective rate ... dropping of crossings ... increased apprehensions and all of that. And it's like, well who are these experts to say it wasn't effective and what are they basing that on? You know, they never really specify."

During a recent reporting trip to West Texas and New Mexico, the Center for Immigration Studies spoke privately, off-record to a dozen U.S. Border Patrol agents who, by virtue of their 40-hour weeks working with and without new and old border walls, feel they are the only ones who can speak with authentic, first-hand expertise as to how well the wall systems work. Because Border Patrol agents are not allowed to speak to the media without permission, CIS is withholding their identities.

Although the agents patrol different regions with unique characteristics and patterns, they held several common perceptions: The new wall additions built under the Trump administration prompted a precipitous decline in illegal immigration and drug smuggling at their locations and forced those ills along paths of least resistance to areas with inferior, older barriers or no barriers at all. While some smugglers use ladders and ropes to defeat the wall, their number are miniscule compared to the high volumes that coursed through areas the wall now obstructs.

The Border Patrol agent near Deming, N.M., addressing wall-opponent claims that ladders, cutting tools, and rope-climbing had entirely neutralized wall effectiveness, told CIS that where groups of 60 or 80 migrants and drug mules once walked through unopposed, only three or four at a time can get over the wall now, and those are the strongest and boldest:

It's all a question of how much more security do you receive for your output and what you invest. And I just think this is going to be a 100-year investment. This is going to last 100 years easy, you know with maintenance and all that. And so the effectiveness of that and what it costs us to apprehend somebody and the deaths that we get out here because of you know ... them crossing and that being reduced. And so, what's the value of all that? To me I always thought it made sense.

Another Border Patrol agent who spoke with CIS works an hour east of El Paso, in the Big Bend Sector, where none of the Trump wall made it to supplement a several-mile segment of wall built more than a decade earlier:

As much as people like to let their gums flap about things they don't know what they're talking about ... a wall is a great deterrent. That whole tall-wall-taller-ladder thing? Haha, fine, let them lug a 45-foot ladder out there in the middle of the desert. I don't care. It's a deterrent. It's not a 100 percent guarantee, but it [a wall] stops most of the people who are mediorcerly [sic] going to commit a crime. A lot of people have no interest in risking their lives to climb that high or lug a band-saw and cutting tools out to the middle of nowhere. A lot of people are deterred by just the idea of all that. Nothing will stop everybody, of course, but for a lot of people? They're not honestly that motivated to go through all of what it takes. Most people are not willing to risk their lives to the extent people think they are.

While Trump's wall improved Border Patrol efficiency in the areas it crosses, vast regions will now remain entirely open to drug and people smuggling that have long easily defeated older vehicle barrier and fencing the Trump wall was to replace.

Another Border Patrol agent on the western outskirts of El Paso works just over the Texas line in New Mexico, where 35 new miles of new steel Trump wall supplemented older walls, but the construction halt left a gap over the rugged flanks of a large mountain. This agent explained that most smugglers and illegal immigrants prefer to hike along the wall to this gap rather than risk climbing it or to drive dozens of miles to an end point. So they funnel to the un-walled mountain but get caught infrequently enough to keep trying:

Honestly, when they started putting this one over there, it's like everything's down. Everything's better. It's a good bit easier. Everything's moving to other areas where there isn't any. Obviously it's easier for us. From here I can see people start coming this way (pointing to a rugged desert area beyond the wall), and by the time they get up on the wall, like, they have to go around to the back end (to a point where the wall gives way to an open mountainside). So it's like, when there's not anything, it's like "We're here. We'll just cross." It's kind of like nothing.

The agent working in the Big Bend sector said that, without walling, present staffing has never had a chance of stopping much of anything coming across the wide-open border. Drug and people smugglers simply go around the few-miles of wall and have their way with the region and are probably happy about Joe Biden's decision, this agent told CIS:

The wall starts and then it ends a few miles down, and in that area where the wall's at, we never have any problems. It was a pretty awesome thing because, before that, our guys were getting into gunfights with drug runners who were driving through the river. It [a wall] makes it hard to drive a packed drug vehicle through the water. But where it ends? We've seen things where along the river they bring people down there by the truckload and they drop as many off as they can because they know we can only catch one or two out of 10. They get picked up and go into the interior of the country to go live as illegal immigrants. Many areas here are very undermanned. At most we might catch three or four out of 10.

With the wall not being finished ... there's really no threat to the ASOs [Alien Smuggling Organizations]. We have five miles of finished wall and a 100 miles of porous border. They've got plenty of places they can go. That's the sad part. There's a wall that just sort of stands there doing nothing to the ASOs.

When there was a commitment to building fences and walls, there had to be a commitment to finish. Without committing and completing it it's really just a wall that only sort of makes people go around it. It's really no sweat to the ASOs.