What Is Border Security?

It's not just walls and agents 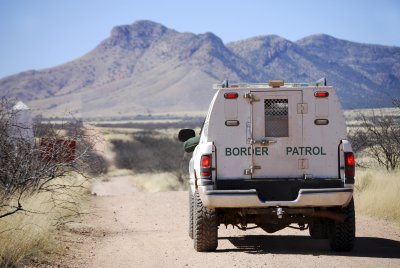 In recent discussions concerning the status of aliens have been granted Deferred Action for Childhood Arrivals (DACA), the one subject that each of the parties has agreed upon is the need for additional "border security". For example, Sen. Jeff Flake (R-Ariz.) contended on January 14, 2018, that the Democrats in the so-called "Gang of Six" were "negotiating in good faith on a bipartisan immigration deal." As Politico reports: "Flake ... a frequent critic of Trump, is part of a bipartisan group of six senators who struck a deal last week to shield Dreamers, fund border security and make other changes to immigration laws."

My colleague Jessica Vaughan described that proposal in a post last week as "not serious". Specifically, Vaughan stated:

[T]he Gang agrees to fund the president's request for $1.6 billion for the border wall, $1.1 billion for other border security projects, and miscellaneous other border-related projects on a smaller scale.

There is no funding for ICE or interior enforcement, no expansion of E-Verify, nor any provisions to address the broken asylum system, sanctuary cities, the continued influx of illegal families and minors from Central America, visa overstays, an entry-exit system, the backlogged immigration court, illegal employment, or any of the other needs compiled at the president's request prepared by career immigration agency officials and outlined in an October memo.

Her points are well taken, because the "Gang of Six" takes a seriously pinched view of "border security".

As preliminary matter, their proposal is what is known on Capitol Hill as an "authorization bill". As one source explains it:

Authorization bills ... include specific figures as funding levels for the agencies and programs, but these sums are upper limits only (for the guidance of the appropriations committee) — no money can actually be spent or committed by the agency or program administrators until after a separate appropriation bill has also been passed and signed into law, legally enabling the Treasury to disburse the money.

Therefore, an authorization bill can state that "X amount of money should be spent for Y purpose," but until the appropriators actually appropriate the money, such language is just words on paper.

More importantly, however, "border security" actually involves a number of activities, many if not most of which take place far away from the physical border itself.

Aliens attempt to enter the United States illegally for any number of purposes, but the one that you most often hear is that they are coming to make a better life for themselves and for their children. This generally means that they are coming to the United States in order to find employment opportunities that are not available in their home countries. Therefore, if they were not able to find such opportunities, they would not come.

This means that a critical element of any border security program is turning off the "jobs magnet" that draws these aliens to the United States. As my colleague Mark Krikorian has put it:

Weakening the magnet of jobs is key to deterring illegal immigration. The online E-Verify system enables employers to check whether new hires are telling the truth about who they are — but it's only voluntary. Only by making E-Verify a universal part of the hiring process can we even begin to claim to be serious about enforcement.

You could fund a border wall that runs the entire length of the Southwest border and hire 10,000 additional Border Patrol agents, but without shutting off the jobs magnet, individuals would still attempt to enter the United States illegally, and many would be successful. In this context, interior security is border security, and any attempt to separate the two would simply be semantics.

Moreover, any bill that does not address the issue of unaccompanied alien children (UACs) would suffer similar problems. The latest statistics from U.S. Customs and Border Protection (CBP) indicate that 4,083 UACs were apprehended by the Border Patrol last month. The president's Immigration Principles and Policies, which was issued by the White House in October 2017, states under "Border Security":

Loopholes in current law prevent [UACs] that arrive in the country illegally from being removed. Rather than being deported, they are instead sheltered by the Department of Health and Human Services at taxpayer expense, and subsequently released to the custody of a parent or family member— who often lack lawful status in the United States themselves. These loopholes in current law create a dramatic pull factor for additional illegal immigration and in recent years, there has been a significant increase in the apprehensions of UACs at our southern border. Therefore, the Administration proposes amending current law to ensure the expeditious return of UACs and family units.

Until those loopholes are plugged, thousands of UACs will attempt entry, often at the risk of their own lives, regardless of whether there is one mile of wall or 2,000.

The prevalence of "sanctuary cities" also has a direct effect on security along the border, as I explained in a November 2017 post:

Probably the strongest argument against sanctuary cities, lax credible-fear standards for asylum, in-state tuition for illegal aliens, and paid counsel in removal proceedings is the fact that each of these programs encourages aliens (and especially women and families) to enter illegally, which usually requires that they put their lives in the hands of smugglers.

Anything that promotes recourse to smugglers is a bad thing, because smugglers are, simply put, bad people. They are really just in it for the money, and have very little concern for the lives, safety, or well-being of their "customers". As importantly, however, money paid to smugglers often makes its way to the very groups whose violent activities abroad have spurred the exodus of those aliens. That money also helps finance those groups in spreading misery and death in the United States.

Under the Constitution, there is only one immigration policy in the United States, and that is the policy set by Congress. States and localities lack the authority to set their own immigration policies, but little has been done to prevent them from doing so. Any effective border security legislation must prohibit "sanctuary city" policies, and thereby make clear that simply entering the United States illegally does not ensure that an alien will be able to remain in this country indefinitely.

Asylum reform is another critical aspect of border security, as noted above. In the popular imagination, when an alien is apprehended entering the United States illegally, the alien is quickly deported from the United States. In reality, many of those apprehended claim "credible fear" or "reasonable fear" of return, entitling them to an interview before an asylum officer, and a potential hearing before an immigration judge on an application for asylum, withholding of removal, or withholding or deferral of removal under the Convention against Torture (CAT). The latest statistics from U.S. Citizenship and Immigration Services (USCIS) indicate that in FY 2017, the agency received 78,564 "credible fear" applications from aliens apprehended along the border and encountered at the ports of entry, in addition to 10,273 "reasonable fear" claims.

In an April 2017 Backgrounder, I described the flaws in this process, and its vulnerability to fraud and abuse. Again, the president's Immigration Principles and Policies have identified asylum reform, and in particular legislation addressing the flaws in that system as well as in the asylum system generally, as a critical aspect of border security.

Similarly, additional resources, in addition to funding for barriers along the border, are necessary to ensure the swift removal of aliens who have entered illegally, a critical component of border security. In his Immigration Principles and Policies, the president calls for additional immigration judges, detention space, and U.S. Immigration and Customs Enforcement (USCIS) attorneys to streamline the removal process, while at the same time ensuring that aliens who are eligible for immigration benefits receive them. Any border security bill must fund these crucial priorities.

Finally, aliens who illegally reenter constitute a significant number of illegal entrants. For example, a November 2012 Memorandum published by the Center for Immigration Studies reported that 130,006 aliens were deported by reinstatement, meaning that they had previously been deported and reentered illegally.

The fact is, illegal reentry is common because the benefits of entering the United States illegally (including employment) are high, and the penalties for illegal reentry are low. In his Immigration Principles and Policies, the president calls for an increase in the criminal penalties associated with illegal reentry, as well as with initial illegal entry. To be effective, any border security plan must ensure that the cost of illegal entry outweighs any potential benefit from entering illegally.

While it is undisputed that additional physical barriers are necessary to secure the border, border security means much more than simply building walls and hiring additional Border Patrol agents. For example, the effectiveness of ICE's interior enforcement efforts is crucial to stemming the flow of illegal aliens across the Southwest border, and ensuring that other contraband (including drugs and weapons of mass destruction) do not enter this country.

Congress would be wise to remember these facts when drafting any so-called "border security" legislation.