WaPo: Harris’s 'Superheroes Are Everywhere' Not Being Given to Migrant Children

But her book, and the White House response to questions about the border, raises concerns 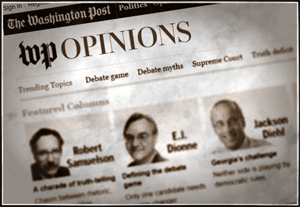 At an April 26 press conference, Peter Doocy from Fox News asked a question about reports that Vice President Kamala Harris’s book “Superheroes Are Everywhere” is being handed out to migrant children in government custody. The Washington Post has subsequently quashed the claim, but the White House response and the Washington Post reporting reveals bigger truths about the lack of transparency at the border.

By way of background, publisher Penguin Random House released that illustrated children’s book in January 2019, when Harris was the junior senator from California.

Here was the April 26 exchange between Doocy and Psaki:

Q: There was a report in the last couple of days in the New York Post that every migrant child being brought to a shelter is being given a copy of her children’s book, “Superheroes are Everywhere.” Do you know why that is and if she is making any money off of that?

MS. PSAKI: Of the President — of the Vice President’s —

MS. PSAKI: I’d have to check with our Health and Human Services team if — you’re talking about if they go to shelters or if they go —

Q Yeah. In the welcome kit, apparently, there’s a copy of her 2019 children’s book, “Superheroes are Everywhere.”

MS. PSAKI: I’d have to certainly check on that. I hear it’s a good book.

On April 27, the Post’s “Fact Checker” column reported that “the White House said the federal government was not purchasing or distributing Harris’s picture book” (well, that’s that). The paper added: “This is a good example of how misinformation spreads on right-wing media and gets amplified by Republican leaders.”

The latter point is a tendentious statement of the sort that arguably does not belong in a “Fact Checker” piece (and one could reasonably contend that there is plenty of “misinformation spread on left-wing media” that goes viral without comment by the Washington Post “Fact Checker”), but I digress.

Psaki should have known this question would come up and been ready to respond, because the border is a hot topic, Harris has been given some sort of responsibility for the border, and children’s book peddling has gotten at least one politician in trouble in the not-so-distant past.

As the Washington Post notes, this claim was first published in the New York Post on April 23. It was based on a photograph from Reuters, which appeared on the front page of the New York Post (the link to that article has been taken down, but PolitiFact links to what appears to be the New York Post’s online article).

That photograph shows what looks like (to those familiar with migrant children’s shelters) a staged cot containing supplies for a newly admitted child, including pillows and blankets, a backpack, drawstring pants, hygiene products, a new pair of shoes, and a single copy of “Superheroes are Everywhere” (other cots in the background are more sparsely outfitted).

According to the Post, the Reuters’ photographer took that photo at an “’emergency intake site’ at the Long Beach Entertainment and Convention Center”, which according to the Department of Health and Human Services (HHS, the department that provides shelter to unaccompanied children apprehended by DHS) has a capacity of 1,000 and houses females 17 and younger and males 12 and younger.

Included in that aid is “food, meals or meal services; education, recreation, entertainment, family reunification, child supervision, legal and religious services; language translation, facility setup assistance and health care”. And, according to the Washington Post, hundreds of books, including a single copy of "Superheroes Are Everywhere".

There is no indication in the Washington Post “Fact Check” that the Reuters’ photographer staged the photo showing that lone tome sitting on the cot in question. Rather, it appears that he or she took the picture of the scene as it appeared. Somebody had to have put it there.

Nor is it entirely clear why that book was donated. It is available only in an English-language version on Amazon, and while doubtlessly many of the children at the Long Beach Convention Center EIS have at least some fluency in English, it is still an odd choice. Here’s the publisher’s summary:

In this empowering and joyful picture book that speaks directly to kids, Kamala Harris takes readers through her life and shows them that the power to make the world a better place is inside all of us. And with fun and engaging art by Mechal Renee Roe, as well as a guide to being a superhero at the end, this book is sure to have kids taking up the superhero mantle (cape and mask optional).

Again, while it is not beyond reason that some children at the Long Beach Convention Center EIS might have interest in what appears to be illustrated campaign literature peppered with uplifting messages (in a foreign language for most), it seems like an odd item for the workers at the facility to put on a cot (again, assuming that the photographer did not stage the shot him- or herself).

It does, however, raise the question as to why the book was in the picture to begin with — a question that the “Fact Checker” does not address. It would be a good question, though, if history is a guide.

Why is that? In an April 21 post, I noted that two of the last five mayors of the city of Baltimore (the closest big city to Washington, D.C., and one that the Washington Post regularly covers) had resigned amidst corruption scandals.

The most recent of the two was Catherine Pugh (D), who was convicted just over a year ago on federal charges including conspiracy to commit wire fraud, conspiracy to defraud the United States, and tax evasion charges.

Pugh’s conviction stemmed from her authorship of four illustrated books in the “Healthy Holly” series, which were aimed at young children.

According to the Department of Justice: “The vast majority of books published by Healthy Holly were marketed and sold directly to non-profit organizations and foundations, many of whom did business or attempted to do business with the Maryland and Baltimore City governments.” You can figure out where the charges went from there.

“Healthy Holly” became a bit of a joke in the Baltimore-Washington area, and Washington Post book critic Carlos Lozada (as “Critical Carlos”) wrote a humorous but scathing review of Healthy Holly: Exercising Is Fun! after the scandal broke in April 2019.

Those were in addition to a piece captioned “Baltimore deserves better than a one-star mayor” (which focused on Amazon reviews of Healthy Holly: Exercising is Fun), one simply headlined “Baltimore Mayor Catherine Pugh resigns amid book scandal”, and a video captioned “'Healthy Holly': A tale of bike pedaling and influence peddling”.

I am not, in any way, suggesting that there is any connection between the corruption that was attached to “Healthy Holly” on the one hand and the publication or distribution of “Superheroes Are Everywhere” on the other, or that there are any shenanigans going on with the vice president, HHS, or anyone else.

Still, it is a little odd that of the “hundreds of books that have already been donated” to the Long Beach Convention Center EIS (which again is run by HHS), it is its single copy of "Superheroes Are Everywhere" that’s on a cot that appears to have been staged at that facility. A more inquisitive “Fact Checker” may have followed up on that question with his unnamed White House source.

That question is especially salient given the field day that the Washington Post had at “Healthy Holly’s” expense (and Baltimore’s consequent shame).

All of this, however, is reflective of the lack of transparency that the Biden administration has shown as it relates to its handling of the border.

On March 22, CNN (arguably a Biden-friendly outlet) ran an article captioned “Reporters call out Biden administration for lack of transparency at the US-Mexico border”, criticizing the president for the administration’s refusal to allow a press pool to accompany DHS Secretary Alejandro Mayorkas on a trip to the border with a bipartisan group of senators and the lack of press access to facilities holding migrant children.

Biden also asserted in a March 25 press conference that “[n]othing has changed” at the border between his first months as president and the “border emergency” in 2019 (he excluded the pandemic year of 2020). Except of course (as I have noted), more unaccompanied children were apprehended by the Border Patrol in March than in any month for which the agency keeps records (back to October 2009), and more migrants period were apprehended than in any month in the last 20 years (which obviously includes all of 2019).

In fact, the Biden administration has notably refused to term the situation at that border a “crisis” (I posited a theory for that in my last post).

To its credit, the Trump administration did that, with then-DHS Secretary Kirstjen Nielsen warning at the end of March 2019 of a “cascading crisis” in which “[t]he system is in freefall”. That month, Border Patrol apprehended just over 45 percent as many migrants at the Southwest border as it did last month. If the system was in “freefall” then, it’s in meteoric entry now.

I do not expect Psaki to know the titles of every book left on every cot in every emergency intake site in the United States.

But given the fact that the number of those cots is growing by the day, and that questions about Kamala Harris’s response to the events at the border are increasing almost as quickly, I expect Psaki to be able to respond to a simple question of public interest that has implications of corruption.

If the Washington Post’s White House source(s) are able to answer the question of whether migrants are being given "Superheroes Are Everywhere", why can’t the White House press secretary?