Check your gas before heading to the port, and heed some useful pro tips 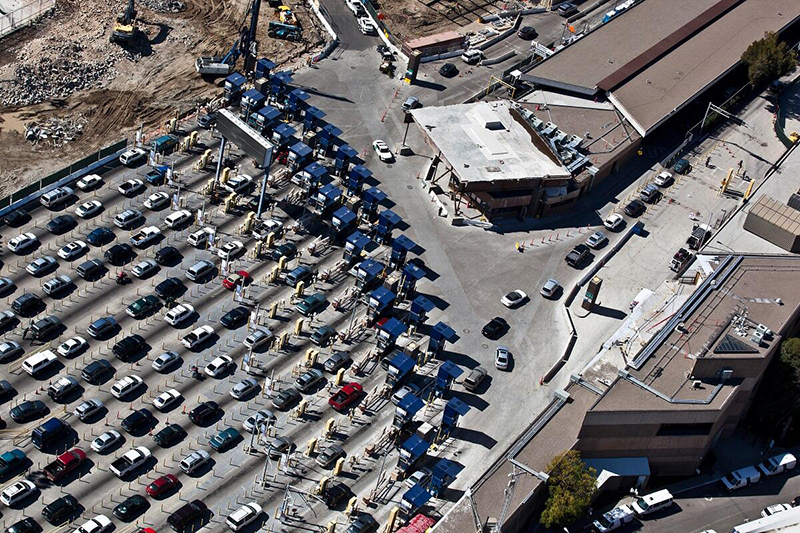 In an effort to slow the spread of the Wuhan coronavirus, CBP at the San Ysidro Port of Entry in California has been limiting staff and closing lanes during off-peak hours, in a move that has particularly — but not exclusively — affected non-essential travelers, and those who are not participating in one of the agency's prescreening programs.

The U.S. government, in coordination with the government of Mexico, barred non-essential travel between the two countries in March. "Non-essential travel" in this case includes "traveling for tourism purposes, such as sightseeing, recreation, gambling, or attending cultural events in the United States." Notably (explicitly, at least) absent from that list are those coming to shop in this country.

In addition, these limitations do not apply to U.S. citizens, lawful permanent residents (LPRs) living in Mexico, those travelling for medical or educational purposes, Mexican nationals working in the United States, and those engaged in cross-border trade.

Given the fact that Mexican nationals make up the largest single group of LPRs (3.13 million, almost 2.5 million of whom were eligible to naturalize — but had failed to do so — as of FY 2019), that could be a lot of LPRs, alone. Of course, LPRs are generally supposed to reside in the United States (only "temporary" travel outside of the country is the rule, and DHS and DOJ can consider whether an LPR has "abandoned" his or her residency based on factors that would suggest an intent to do so).

But, there is a little-known subcategory of "commuter" LPRs, who are allowed to reside in Canada or Mexico and commute to the United States for regular or seasonal employment without losing their LPR status. The number of those commuter LPRs is unclear, but the cost of living in Mexico is cheaper, and few CBP officers at the ports (from my experience) have traditionally had the time to look too closely into the issue, regardless of whether the alien is a garden-variety or commuter LPR.

In addition, as anyone who has spent any amount of time at the border knows, it is common for Mexican nationals to enter the United States to work and travel, get medical care, and for school. And move freight — the United States is far and away Mexico's largest trading partner, and that trade is essential to political and social stability south of the border (and pretty important economically north of it, too).

In other words, even under the March restrictions, there would still be a huge amount of northbound traffic into the United States.

Travelers can expedite this process by obtaining a "passport card", enhanced driver's license (if they are from certain U.S. states and Canadian provinces), or a "Trusted Traveler" document, each of which contains "touchless" Radio Frequency Identification (RFID) technology. Trusted Travelers are pre-screened through one of four different programs (Global Entry, NEXUS, SENTRI, and FAST). NEXUS is for U.S.-Canadian cross-border travel, and FAST is for truckers carrying "known low-risk shipments" into the United States from Canada or Mexico.

Pro tip: Enroll as a family in Global Entry, especially if travelling with kids. It makes domestic and international travel a whole lot easier and less intrusive.

After enrollment and acceptance into one of these programs (and receipt of one of these documents), travelers to the United States can use a designated "Ready Lane" at a land port of entry.

Which brings me back to San Ysidro. Starting on Friday, CBP began closing lanes at more than a dozen ports of entry along the southern border to stem non-essential travel by U.S. citizens and LPRs. That day, wait times at those ports varied from none to several hours. (Second pro tip: Check the wait times on CBP's website before crossing unless you like sitting in your car for hours.)

Only two non-Ready Lanes were open at the port of San Ysidro (the busiest land port in the Western Hemisphere) on Monday, and non-essential travelers were being referred to secondary inspection for additional questioning. (Third pro tip: You don't ever want to go to secondary.) Those non-essential travelers were also provided with "educational material" — in particular the CDC's Travelers Health Advisory Notice.

Reporting indicates that by Monday, the wait for entry at San Ysidro exceeded 10 hours. Drivers ran out of gas, a car engine caught fire, and one woman suffered a heart attack in the backup.

I will note, however, that by 7:00 AM on Tuesday, the wait at San Ysidro (according to CBP) was just 10 minutes (down from an average of 82 minutes), so the word appears to be getting out.

Far more people (students, workers, churchgoers, etc.) are suffering from coronavirus-government restrictions in the United States than actually have the disease, but it is still serious business. And Los Angeles County (just north of San Ysidro) leads the nation in confirmed cases of coronavirus (according to Johns Hopkins University), with 232,893. LA trails Queens and Kings (Brooklyn) Counties in New York in COVID deaths — but the margin is narrowing.

Similarly, Maricopa County, Ariz. (home to Phoenix), about two- to three-hours' drive north of the southern border, comes in number three in the number of cases (131,962), again according to Hopkins.

Given these facts, it makes sense for CBP to deter leisure travel over the southern border — even for U.S. citizens and LPRs. I will leave it to my colleague Todd Bensman to analyze how the coronavirus is affecting communities on both sides of the border, but given questions about how many cases of the illness there are in Mexico, and the prevalence of it north of the border, the agency's action will protect both nations.

Speaking of north of the border (albeit in a different context), my colleague David North has noted that there has been an uptick in recent months of cross-border traffic from Canada in recent months. Even with that uptick, however, the number of border crossings across the U.S.-Canadian border is dwarfed by U.S.-Mexican border crossings, so the change in policy is likely to have little effect on traffic from Canada.

Don't get me wrong — I understand the appeal of Pacific Beach, and have enjoyed the shopping and food in La Jolla (not to mention the golf in Coronado). But if you are living in Baja, I recommend you stay in Baja. Otherwise, check your gas before you head to the border.