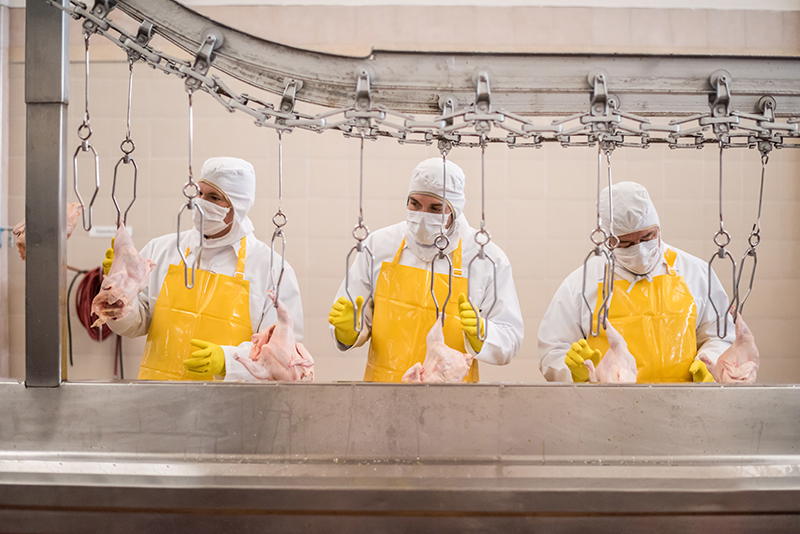 On Thursday, Mike Hurst, the U.S. Attorney (USA) for the Southern District of Mississippi, announced that indictments had been handed down by a grand jury against four "managers, supervisors, or human resources personnel at companies" targeted in an ICE worksite enforcement action a year ago. That operation involved seven agricultural processing plants owned by five different employers in Mississippi. These indictments should not come as a surprise, nor should their timing. I told you a year ago this was coming — and don't be surprised if more indictments are announced.

The August 7, 2019, action at those seven plants was big news at the time (680 illegal aliens were apprehended in that operation, the largest single-state worksite enforcement operation ever), and I wrote about various aspects of the case. It was not big news because it happened; rather, it was big news because ICE had the temerity to do its job.

My colleague Jerry Kammer discussed this aspect of the case in a brilliantly written piece on August 12, 2019, captioned "TV News Flops in Covering the Mississippi Worksite Raids". Here is a sample passage:

Among the half-dozen TV reports I saw, CNN was the worst at squeezing the story for every ounce of pathos and suggesting that outrage was the only appropriate response. The CNN account's tone and content were condensed in the text at the bottom of the screen filled with traumatized children. "Torn apart," it read. "Crying children left without parents after immigration raids."

Even in its reporting on the latest indictments, CNN threw in — in the second paragraph — that: "The raids made headlines around the nation as many children, on the first day of school, were separated from parents who were rounded up in the operation."

Keep in mind that Kammer is no "Trumpian". But he understands the effects that non-enforcement of the immigration laws has on the wages and working conditions of those "forgotten Americans" — both citizen and lawful immigrant — who are living at the margins (not surprisingly, as I reported in January, ICE's August operation opened up jobs for those American workers). If only the political class did, too.

That letter largely focused on the effects of the operation on the illegal-alien workers themselves and their families, and oddly, also on the amount that the operation cost. Oddly, because government employees get paid whether they are working or not, but the chairman wanted the GS-pay scale of all those involved.

The chairmen notably complained that the employees, and not their employers, are the targets of worksite-enforcement operations. In this vein, they demanded information about "the nature of all criminal charges stemming from these enforcement actions, including whether any owners, employers, or individuals otherwise responsible at" those worksites "were charged, and the nature of those charges".

In an August 14 post responding (metaphorically) to that letter, I explained how difficult and time-consuming it is to bring criminal charges against the owners of targeted employers under the Immigration and Nationality Act (INA) — largely because of hindrances Congress put into the worksite-enforcement provisions of the INA. Difficult — but not impossible. But definitely time-consuming, and nothing that was going to be accomplished in two days.

So how would the U.S. Attorney's Office for the Southern District of Mississippi ever get convictions against those employers? That is easy: It can ask the employees who presented bogus documents to begin with, or who were allowed to work without authorization, whether the employer knew they did not have authorization to work but hired them anyway. But first, prosecutors have to get access to those employees.

And it appears I was right. It took almost a year, but DOJ announced Thursday that four different individuals have been indicted and are facing criminal charges (two from A&B Inc., and two from Pearl River Foods, LLC). Those charges range from harboring illegal aliens, to assisting those aliens in passing themselves off as United States citizens and obtaining fraudulent Social Security cards, to false statements to federal officials.

One particular defendant faces even more serious charges. DOJ alleges that one Carolyn Johnson (who was a human resource manager at Pearl River in Carthage, Miss.) engaged in six felony counts of harboring an illegal alien, one count of wire fraud, and two counts of aggravated identity theft.

Interestingly, the wire fraud and identity theft charges stem from a grant that the State of Mississippi had provided to Pearl River for on-the-job training (OTJ) for its employees. The department alleges that Johnson submitted requests for reimbursement for OTJ that the employees never actually received. Johnson is facing up to 84 years in prison and $2.25 million in fines. I cannot wait to read the indictment (not publicly available yet), but I have my guesses about what the alleged OTJ scheme involved.

It is also interesting that the harboring charges Johnson and her co-worker Aubrey "Bart" Willis (the manager of Pearl River in Carthage) are facing relate to the harboring of aliens after the execution of the warrant at Pearl River on August 7 last year. Does DOJ allege that Johnson and Willis were hiding aliens during ICE's operation? If so, that is some serious business, but again, the indictment will make that clear.

The positions held by two of those indicted (Salvador Delgado-Nieves and Iris Villalon, both with A&B) are not listed in the press release, but it appears that all four were in lower- to middle-management at their respective companies. USA Hurst advised that these indictments "mark the beginning, not the end, of our investigations and prosecutions", so don't be surprised if DOJ does not attempt to reach plea deals with these defendants to land bigger fish.

In addition to these indictments, DOJ announced that 119 illegal aliens involved in this operation had been prosecuted, or are facing prosecution, for (among other offenses) stealing the identities of American citizens, falsifying immigration documents, fraudulently claiming to be citizens, and illegal reentry after deportation.

The wheels of justice turn slowly. And grand juries are particularly sluggish in their work — which is good for all of us, because a rush to judgment would snare a lot of innocent people. One would assume that congressmen know this, but sometimes interest in staying ahead of the news cycle itself leads to a rush to judgment. Or, as I stated at the time:

Anyone who has ever done target shooting knows that there are three steps to success: ready the weapon, aim the weapon, and shoot the weapon. Switching steps two and three is a recipe for failure, assuming the point is actually hitting the target, and not merely the "boom" that follows the pulling of the trigger.

It would appear that USA Hurst wants to hit the target in this case. He has aimed and pulled the trigger. Now, wait for the boom.