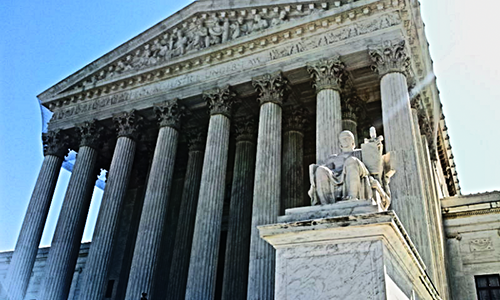 My July 14, 2017, blog post reported on an order filed on July 13, 2017, by United States District Judge Derrick K. Watson for the District of Hawaii that enjoined the Departments of Homeland Security and State from:

1. Applying section 2(c), 6(a) and 6(b) of Executive Order 13,780 to exclude grandparents, grandchildren, brothers-in-law, sisters-in-law, aunts, uncles, nieces, nephews, and cousins of persons in the United States

2. Applying Section 6(a) and 6(b) of Executive Order 13,780 to exclude refugees who: (i) have a formal assurance from an agency within the United States that the agency will provide, or ensure the provision of, reception and placement services to that refugee; or (ii) are in the U.S. Refugee Admissions Program through the Lautenberg Program.

This followed the Trump administration's implementation, in accordance with limitations in a June 26, 2017, Supreme Court decision, of Executive Order 13780 (captioned "Protecting the Nation from Foreign Terrorist Entry into the United States" (EO-2) and popularly known as the "Travel Ban").

To explain, Section 2(c) of EO-2 suspended the entry of nationals of Iran, Libya, Somalia, Sudan, Syria, and Yemen for 90 days from the effective date of that order, subject to certain "limitations ... and exceptions", including for lawful permanent residents, dual nationals, aliens granted asylum, and refugees already admitted. These countries were so identified, the order explained, because conditions in each (as detailed in section 1(e) of EO-2) "demonstrate" that nationals of those countries "present heightened risks to the security of the United States." Section 3 of EO-2 also provided waivers of section 2 on a "case-by-case basis" for affected foreign nationals.

Section 6(a) of EO-2 suspended decisions on refugee applications for 120 days, and section 6(b) of that order capped the number of refugees to be admitted in FY 2017 at 50,000. Section 6(c) of EO-2 made "case-by-case" waivers of the suspension in section 6(a) available.

In its June 26, 2017, order, the Supreme Court granted the government's requests to stay two circuit court orders enjoining those provisions, "to the extent the injunctions prevent[ed] enforcement of [section 2(c) of EO-2] with respect to foreign nationals who lack any bona fide relationship with a person or entity in the United States." It left the "injunctions entered by the lower courts in place" however "with respect to respondents and those similarly situated."

The Court explained that under its order, section 2(c) of EO-2:

[M]ay not be enforced against foreign nationals who have a credible claim of a bona fide relationship with a person or entity in the United States. All other foreign nationals are subject to the provisions of EO–2.

The facts of these cases illustrate the sort of relationship that qualifies. For individuals, a close familial relationship is required. A foreign national who wishes to enter the United States to live with or visit a family member ... clearly has such a relationship. As for entities, the relationship must be formal, documented, and formed in the ordinary course, rather than for the purpose of evading EO–2. The students from the designated countries who have been admitted to the University of Hawaii have such a relationship with an American entity. So too would a worker who accepted an offer of employment from an American company or a lecturer invited to address an American audience.

With respect to a Ninth Circuit injunction on enforcement of the suspension of refugee admissions under section 6(a) of EO-2, and the 50,000-refugee cap in section 6(b) of that order, the Court held that the "equitable balance" it crafted with respect to section 2(c) of EO-2 would apply to those sections, as well:

An American individual or entity that has a bona fide relationship with a particular person seeking to enter the country as a refugee can legitimately claim concrete hardship if that person is excluded. As to these individuals and entities, we do not disturb the injunction. But when it comes to refugees who lack any such connection to the United States, for the reasons we have set out, the balance tips in favor of the Government's compelling need to provide for the Nation's security.

Based on this, the Court concluded that:

Section 6(a) may not be enforced against an individual seeking admission as a refugee who can credibly claim a bona fide relationship with a person or entity in the United States. Nor may [section 6(b) of EO-2]; that is, such a person may not be excluded pursuant to [section 6(b) of EO-2], even if the 50,000-person cap has been reached or exceeded. As applied to all other individuals, the provisions may take effect.

On July 14, 2017, the Justice Department filed a Motion for Clarification of the Supreme Court's order in which it argued that Judge Watson's July 13, 2017, order:

[I]nterpretation of [the Supreme] Court's June 26, 2017, stay ruling distorts this Court's decision and upends the equitable balance this Court struck. The district court's categorical holding that the Order may not be applied to any refugee applicant as to whom the Department of State has obtained a contractual commitment from a resettlement agency – which includes every refugee permitted to enter the United States — effectively eviscerates this Court's ruling partially staying the injunction as to Sections 6(a) and 6(b). And the district court's sweeping interpretation of "close familial relationship" to encompass a wide range of distant relatives — including cousins, uncles, and siblings-in-law — effectively eliminates the "close" requirement and has no basis in this Court's ruling or the [Immigration and Nationality Act (INA)].

The Justice Department requested therein that the Court:

"If the Court prefer[red] that the court of appeals first consider the scope of this Court's stay order," the Justice Department stated, it "request[ed] that the Court grant a stay pending disposition of that appeal."

On July 19, 2017, the Supreme Court, in a short "Order in a Pending Case", denied the government's motion seeking clarification, but stayed the "District Court order modifying the preliminary injunction with respect to refugees covered by a formal assurance ... pending resolution of the Government's appeal to the Court of Appeals for the Ninth Circuit." This in essence means that the Departments of State and Homeland Security must exclude "grandparents, grandchildren, brothers-in-law, sisters-in-law, aunts, uncles, nieces, nephews, and cousins of persons in the United States" from enforcement of sections 2(c), 6(a), and 6(b) of EO-2.

At the same time, however, and pending resolution of its appeal to the Ninth Circuit, the government can continue to enforce sections 6(a) and 6(b) of EO-2 to "refugees covered by a formal assurance" from an agency within the United States unless they have familial or other ties to the United States. As a result, according to the Associated Press, "up to 24,000 refugees who already have been assigned to a charity or religious organization in the U.S. will not be able to use that connection to get into the country."

This will likely not be the last modification to EO-2.