NBC News videos seem to tell a different story, but I encourage the president to return to spur more ‘coincidental’ border enforcement 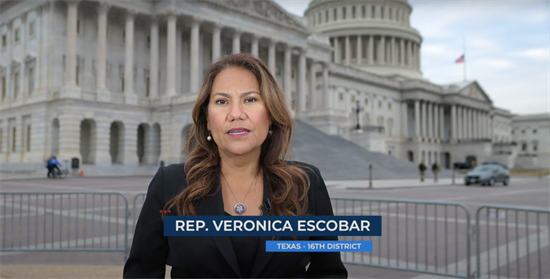 In a recent post, I discussed reports that President Biden was visiting a sanitized, “Potemkin Village” version of the chaotic Southwest border during his trip to El Paso, Texas, on January 8. The local congresswoman, Rep. Veronica Escobar (D) appeared on Fox News on January 11 to “debunk” such claims. Somebody should tell NBC News, which is offering videos that seem to tell a different story.

Biden at the Border. Nobody is really sure when Biden last went to the Southwest border (if he ever did), though the Washington Post did some digging over a year ago and “discovered that Biden briefly drove past the border while on a campaign swing in 2008”.

What is known, however, is that Biden eventually bowed to pressure and went to El Paso last week. What he saw there, however, did not seem to comport with recent reports from that border city.

Instead, according to CNN, the president’s visit was “tightly controlled”, with Biden spending “several minutes along the iron fence separating the US and Mexico as he spoke with officers in green uniforms”, before going to “a migrant processing center, where he did not appear to meet with any migrants”. No migrants were visible along the president’s motorcade route, either, the outlet reported.

That would appear to be a red flag, given that the Texas Tribune, for example, reported on December 14 that Border Patrol had been releasing hundreds of migrants on the streets in El Paso daily, leaving “migrants with nowhere else to go ... sleeping wherever they can in downtown”.

On December 31, CNN reported that there were “hundreds of homeless migrants” living in “squalor” in El Paso amid “deportation fears”.

That was after DHS asserted on December 20 that it had “moved more than 3,400 migrants out of El Paso through Title 42 expulsions to Mexico or ICE expedited removal flights”, and an additional 6,000 others through what it termed “lateral decompression to other sectors for further immigration enforcement proceedings”.

According to the New York Post on January 4, Border Patrol was “rounding up” dozens of migrants who had camped out near Sacred Heart Catholic Church in El Paso (which itself was “filled with women and children”), even while “church volunteers hurriedly ushered people onto its property and out of the reach from agents”.

Escobar on Fox News. These reports notwithstanding, Escobar went on Fox News to “reject[] the ‘absurd’ allegations that President Biden was presented with a watered-down version of the chaos at the border during his visit” to her home district.

The congresswoman, “who worked closely with the White House to plan the president's trip”, told “America Reports” host John Roberts:

I want to debunk that ... First and foremost, no one is more interested in a secure dignified border than those of us who actually live there. So this trip was important to me, it was important to my community, the federal workforce, NGOs, local governments, etc. We would never conspire to paint a different picture. It’s not in our best interest.

Number two: The idea that we would sanitize the community to prevent the president from seeing what we have been trying to address at the local level is absurd.

A group of El Paso residents and volunteers have formed an ad-hoc “night watch” to monitor U.S. border agents as they arrest migrants sleeping on the city’s streets.

In new video taken by one of those volunteers and obtained by NBC News, migrants sleeping outside a bus station are seen being apprehended by Border Patrol officers on Jan. 4, the week before President Joe Biden arrived in the border city.

In the video, several migrants are escorted off a bus by Border Patrol with their hands above their heads. In another scene filmed that night, a young boy says in Spanish, “Llevaron a todos,” which means, “They took everyone.”

Those videos were taken by “a volunteer at the shelter”, who “estimated to NBC News that approximately 100 to 150 migrants had been arrested and that more migrants sleeping by the bus station were taken into custody later in the week”.

CBP told the outlet that those arrests were made “in response to migrants evading apprehension in the El Paso area”.

Two Things Can Both Be Correct. Of course, Escobar’s statements and the CNN and NBC News reporting from El Paso may both be correct.

It appears that in addition to the thousands of migrants who are apprehended entering illegally on a weekly basis into El Paso and its environs, many others have evaded apprehension. Rather than moving on into the interior, however, by choice or chance they are camped out in the city.

I would expect Border Patrol to sweep a border city looking for “got-aways”, but it is curious that the first news about such sweeps happened to roughly coincide with and precede Biden’s brief visit to El Paso.

Biden Could Strike a Blow for Enforcement with Additional Visits. Perhaps the president could strike a blow for enforcement by scheduling visits at some other border towns that are reeling under the pressure of DHS migrant releases. McAllen, Texas, would likely welcome a visit, as would Del Rio farther up the Rio Grande.

Or Biden could visit the Yuma Gap, where his administration forced former Arizona Governor Doug Ducey to remove shipping containers he had erected as a makeshift border wall where the fence was open and uncompleted. The Colorado River is lovely, and the president would have a now-unobstructed view of it from the levee on the U.S. side.

For what’s its worth, Republicans who are now in charge of the House of Representatives could hold field hearings at such locations. Nothing would prove their points about border security better than the sight of migrant encampments on the streets and aliens entering illegally, which would provide CBP impetus to respond to heighten its enforcement efforts.

It’s not entirely clear what Biden hoped to prove in El Paso, though he apparently wanted to highlight his January 5 “New Border Enforcement Actions” (which I described as just his “latest plan to funnel illegal migrants into the United States”), and burnish his credentials in advance of his “bilateral meeting” with Mexican President Andrés Manuel López Obrador on January 9.

Any Biden border trip that raises more questions than it answers, or that spurs unfavorable reporting from otherwise friendly outlets like CNN and NBC News, can hardly be viewed as a success. I, for one, am willing to give the president a mulligan, and suggest that he visit the border again (and again), if for no other reason than to ensure that more “coincidental” enforcement occurs.