Texas Building Its Own Border ‘Wall’

A familiar fence, a Lone Star flag, and the federal government’s ignored obligations 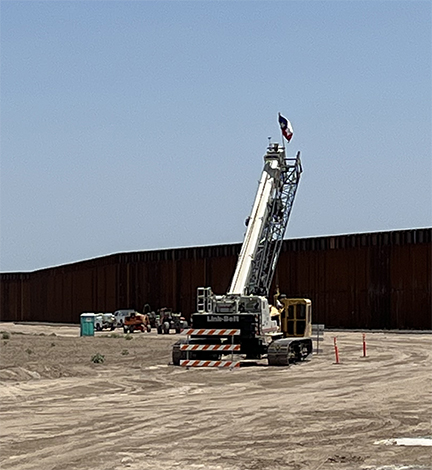 During my recent visit to the Rio Grande Valley (RGV), I saw the “border wall” that the state of Texas has been building since shortly after the Biden administration implemented its January 20, 2021, “pause” on border barrier construction. The Texas wall had a familiar feel to it, which makes sense: It is all-but identical to the fencing the last three administrations erected at various spots along the Southwest border, back when the federal government recognized its national security and border obligations.

Background on Border Barriers. Border barriers, which had long been a fairly non-controversial and bipartisan solution to border security (the Secure Fence Act of 2006 passed the House and Senate with support from both parties), became a hot-button issue once they were championed by then-candidate Donald Trump in the 2016 presidential election.

Anything immigration-related that Trump liked his political opponents generally didn’t, however, and in December 2018, when Trump demanded $5 billion for barrier construction, a weeks-long government shutdown ensued.

In the end, on February 15, 2019, Trump agreed to $1.375 billion for border-barrier funding, and the impasse ended. That day, though, he also issued a proclamation declaring a national emergency at the Southwest border, and directing the Department of Defense (DoD) to assist in securing that border.

Ten days later, DHS asked DoD for assistance in constructing "fences[,] roads, and lighting" within 11 specified project areas, "to block drug-smuggling corridors across the international boundary between the United States and Mexico." That construction was in addition to the $1.375 billion that Congress had appropriated for border-wall funding.

The reprogramming of DoD funds for fence and infrastructure construction went through various legal actions, but was eventually given the green light by the Supreme Court.

Additional funding of $1.375 billion “for the construction of [a] barrier system along the southwest border” was included in both the FY 2020 and FY 2021 appropriations bills.

By December 31, 2020, DHS had used that funding to build or replace more than 112 miles of border wall, and all told, 458 miles of border barriers were built or replaced under the Trump administration, mostly “18- to 30-foot steel bollards anchored in concrete”. The majority of that construction (226 miles) was in Arizona; just 55 miles was in Texas, but much more was promised.

On his first day in office, January 20, 2021, President Biden issued a “Proclamation on the Termination Of Emergency With Respect To The Southern Border Of The United States And Redirection Of Funds Diverted To Border Wall Construction”. Apparently in the president’s mind, there was no longer an “emergency” at the Southwest border.

In section 1(a)(i) of his January 20 proclamation, Biden directed DoD and DHS to “pause work on each construction project on the southern border wall, to the extent permitted by law, as soon as possible but in no case later than seven days from the date of this proclamation.” (Emphasis added.)

It does not appear that the federal government has undertaken much border barrier construction since, and as I noted in a March post, fencing panels are sitting and rusting in the Arizona desert outside of Yuma, right next to a small gap that thousands of migrants have rushed through this year. In total, Biden’s pause in border construction has cost American taxpayers up to $2 billion.

Texas’ Construction Efforts. Texas Governor Greg Abbott (R) is not waiting for that pause to end. In June 2021, he announced a “Border Wall Construction Strategy” to erect barriers at points along the state’s border with Mexico. Abbott explained:

The problems along the border are only getting worse due to President Biden's inaction. Property is being destroyed, deadly drugs and illegal weapons are being smuggled into communities throughout the state, law enforcement is having to redirect their resources, and county judges and mayors are facing skyrocketing expenses.

Legislative leaders in the Lone Star State initially promised $250 million in seed money to break ground, and Abbott also launched a website soliciting donations from private individuals (by March 28, they had raised $55,268,475).

By the end of March, Texas had erected 1.59 miles of the initial 1.7 miles of fencing at the Southwest border. As with most federally built border barriers of recent vintage I have seen, Texas’s version is 30-foot high steel bollard fencing, and with good reason: The state Facility Commission's Federal Surplus Program managed to obtain “prefabricated Federal border panels through the General Service Administration (GSA) in late November 2021”. At least they went to good use.

A mile and a half may not sound like a lot in the grand scheme of the 1,954-mile Southwest border, but the section erected thus far is in a high-traffic area not far from Rio Grande City. How do I know it is a “high-traffic area”?

While I was checking out the site, I had to dodge a private tour bus that was rushing to the river, about a mile away — 90 illegal migrants had just been apprehended there in the middle of a Friday afternoon, and the bus had been contracted by CBP for transport.

Texas has now dedicated $1.05 billion to this construction effort (including the donations), enough for at least 19 miles of fencing, and likely much, much more. If I were a Texan, however, I would be plenty perturbed. Securing the border is the federal government’s job, and its failure to do so is a dereliction of that duty.

More Infrastructure Is Needed than Just “Walls”. One other interesting fact I learned in the RGV is that “border wall construction” is about much more than walls. DHS’s pre-Inauguration Day plans also included fiber optic cable, which would run along the length of the border.

That cable would have served many purposes. Cell phone connections at the border are spotty (at best) outside of the towns that dot the border, and agents could have used that fiber optic cable to create WiFi hotspots to communicate with one another.

The cable would also have connected ground-based sensors, which could have communicated back to CBP when a migrant or drug smuggler was crossing a remote area of the border (older sensors often cannot distinguish between humans and animals). Finally, automatic mechanisms that would have allowed agents to open and close gates along the fence were dependent on that cable.

The gates are still there, as are the mechanisms needed to open and close them. They just don’t connect to anything. And investing in the sensors is worthless if they are sending out signals to nowhere. As for agents, they are dependent on whatever commercial cellular service they can find.

From what I was told, when Biden “paused” the “wall”, he paused the cable, too. It’s easier to lay a cable than it is to build a wall, but the land needs to be obtained to do so, the cable needs to be put in place, and the whole thing needs to be hooked up. Maybe next administration.

The Lone Star Flag in the Desert. Thanks to an unprecedented 30-year period of federal spending, construction — and construction cranes — are a common sight in the National Capitol Region. Lobbyists need high rises to live in, and penthouses don’t build themselves.

Those cranes are often topped by American flags — construction workers are usually a fairly patriotic sort — and they blow in the Potomac breeze around the D.C. area. Texans are by and large patriotic, too, but at the Texas wall construction site, Old Glory was nowhere to be seen: At the top of the crane in the middle of the desert was the Lone Star Flag, an implicit repudiation of the folks back in Washington.

Given the fact that then-Sen. Joe Biden (D-Del.) voted for border barriers in the Secure Fence Act of 2006, President Joe Biden’s “pause” on federal barrier construction seems like little more than a fit of churlish and puerile piqué.

Such petulance is not a good look for a soon-to-be octogenarian, nor for a man who claimed in his State of the Union address that “we need to secure the Border”. Texans thinks that a border fence is so important they are willing to pay for it themselves, and given the fact that more than 64 percent (1,254 miles) of the Southwest border separates their state from Mexico, they likely know what they are talking about.

The lone star on the flag is a remnant of the days when Texas was a republic, but at the state’s border fence construction site, it also represented Austin’s willingness to go it alone in protecting its own citizens and communities across the nation from the drugs and crime an open border breeds. It is the administration’s fault — and shame — that Texans are left to go it alone.