‘Shooting the hostage’ at the Southwest border 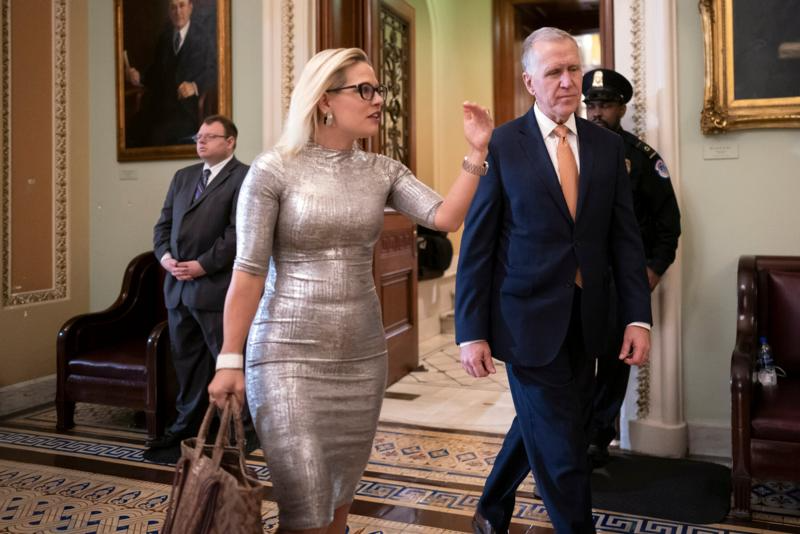 A rough outline of a proposal by Sens. Kirsten Sinema (D-Ariz.) and Thom Tillis (R-N.C.) to grant amnesty to so-called “DREAMers” (and likely many, many others) is emerging from the bowels of Congress. In essence, it trades a pathway to citizenship for a poorly thought-out reconfiguring of border security that will likely make things at the U.S.-Mexico line worse while increasing quasi-legal immigration for decades to come.

The Broken Border. In a “fact sheet” released in July 2021, the White House touted its alleged accomplishments in building “a fair, orderly, and humane immigration system”. Notably, that document alleged the administration had achieved these results “while reckoning with the prior Administration’s cruel and reckless immigration policies, which exacerbated long-standing challenges and failed to securely manage our border”.

Although DHS Secretary Alejandro Mayorkas parroted that “broken immigration system” line in a May interview, and placed blame on the Trump administration for its “dismantling” of that system, in reality Biden had inherited what his first Border Patrol chief, Rodney Scott, described in September 2021 as “arguably the most effective border security in” U.S. history.

The result has been what the editorial board at left-leaning outlet Bloomberg Opinion in August termed “Biden’s Border Fiasco”. Border Patrol agents set a new yearly apprehension record at the Southwest border in FY 2021 (when they stopped nearly 1.66 million illegal entrants), a dubious achievement they bested in FY 2022, as apprehensions soared past 2.2 million.

As bad as those numbers are, however, they still hide the true scope of the humanitarian disaster that is unfolding at the Southwest border. That’s because those apprehension totals don’t include an estimated 389,000 “got-aways” — illegal entrants who successfully evaded agents and made their way into the United States — in FY 2021, a figure that climbed to nearly 600,000 in FY 2022.

The apprehension, transporting, processing, caring for, and (all too often) releasing of tens of thousands of illegal migrants per month has overwhelmed Border Patrol’s limited capacity, giving smugglers free range to operate in zones devoid of any enforcement.

Speaking of migrant releases, the Immigration and Nationality Act (INA) mandates the detention of all illegal entrants, from the time that they are apprehended to the point at which they are either granted asylum or removed.

Despite that fact, by my estimates DHS under the Biden administration has released more than 1.5 million aliens who were apprehended at the Southwest border, and more than 89,000 in October alone.

The administration contends that it cannot detain those aliens because it lacks detention space, and yet the president is requesting that Congress cut detention bed funding in his FY 2023 budget — proving that despite what your mother may have told you, in Washington you can have your cake and eat it, too.

Sinema-Tillis. It is against this backdrop that Sinema and Tillis are concocting their amnesty plans.

The parameters of that plan are “evolving”, but it appears that they have settled on a proposal that would allow an estimated two million aliens who are illegally present in the United States and who came to this country under the age of 18 to gain “conditional permanent residence”, which would convert to lawful permanent resident (LPR) status after a period. Five years after those aliens become LPRs, they can apply for citizenship.

As an aside, similar amnesties have been shot through with fraud in the past, and there is no reason to believe that the current plan would be any different. Expect any number of aliens who came here as adults to claim to have been minors when they arrived, and a robust fraudulent document industry to benefit from helping them prove it.

In exchange, the American people will receive a border security system that is worse than it was on Inauguration Day 2021.

For example, the Sinema-Tillis plan would provide for (extremely) modest increases in Border Patrol staffing. There are currently fewer than 17,000 Border Patrol agents at the 1,954-mile Southwest border, and they work 50-hour weeks. That means that just over 5,000 agents are “on the line” at any given time.

From what I have heard, the plan would increase staffing to 20,500 agents, an increase of less than 21 percent, even though Border Patrol apprehensions have grown by more than 159 percent between FY 2019 and FY 2022.

It would also boost the number of CBP officers at the ports of entry by 600 positions. That would be welcome news, were it not for the fact that the senators’ plan would also funnel would-be illegal entrants through those ports at the Southwest border.

That is nothing more than a “bait and switch” scheme that would elide the degradation of the legal immigration system by rebranding tens of thousands of would-be illegal migrants monthly as “parolees”. Worse, however, it would encourage even more foreign nationals with no right to enter the country to come to the Southwest border and queue for inevitable release into the country.

Speaking of “release”, the plan would also create “Regional Processing Centers” (RPCs) at or near the border where aliens would be screened to determine whether they have asylum claims.

Nothing suggests, however, that illegal migrants would be detained at those RPCs until their asylum claims are actually adjudicated (as, again, the INA already requires). Rather, the senators’ plan calls for an expansion of so-called “Alternatives to Detention” (ATD). Simply put, “alternatives to detention” are not necessary where aliens are actually being detained.

In any event, ATD is not only largely useless, it’s also more costly than simple and effective detention, as I have explained at length in the past.

The Wrong Time. There are many other bad ideas in this proposal that my colleagues and I will likely address in the future. The biggest issue, however, is that this is the wrong time for Congress to be considering such a massive sea change in immigration law and policy.

Congress is currently in its “lame duck” session, the period between the midterm elections and the start of the next, 118th, Congress on January 3. At present, Democrats control both chambers, but come January, Republicans will hold the gavel in the House.

Democratic leadership in Congress has been reluctant — to put it kindly — to do robust oversight of the damage that the Biden administration has wrought through its policies at the border and on immigration enforcement in the interior. That makes it impossible for members to craft appropriate solutions, or to address the issues in the Simena-Tillis proposal that I have raised above.

Nor will there be time between now and the Senate recess (currently scheduled for December 22) for senators to consider the many and numerous implications of an amnesty that will grant benefits to millions of aliens unlawfully present.

Not only would haphazard consideration of these proposals be buying litigation that will continue for years (if not decades) and cost tens of millions of dollars, but it would also call into question whether House Republicans will fund any of the plans set forth in the Sinema-Tillis proposal.

This would be an “authorizing” bill, one that sets up systems and programs without appropriation streams. Soon-to-be majority Republicans in the House could stifle amnesty by refusing to pay for it, setting up a battle with the Senate and the White House that would transform the current state of acrimony in D.C. into all-out war.

Shooting the Hostage. The 1994 Keanu Reeves vehicle Speed set the stage for a trope now known as “shooting the hostage”, based on the following exchange between Reeves’ character (Jack Traven) and Jeff Daniels’ Harry Temple:

Harry Temple: Alright, pop quiz. Airport, gunman with a hostage. He's using her for cover. He's almost to a plane. You're one hundred feet away.

Jack: Take her out of the equation. Go for the good wound and he can't get to the plane with her. Clear shot.

Harry Temple: You're deeply nuts, you know that? "Shoot the hostage."

That is the dilemma that the Biden administration’s feckless and misguided immigration and border policies have established for those concerned about our national security and sovereignty: Making the laws even worse to resolve the short-term vulnerabilities that the administration has created at the Southwest border; or holding tight until the next Congress for lasting solutions.

As a note, [shooting the hostage] is definitely not a good idea in real life. A shot in the leg or arm can be fatal, especially if the shot hits a major artery, and the time between the shooting and presumable paramedic arrival on-scene/transport to hospital takes as long as it seems to in most movies. So this usually wouldn't work in reality.

The same is true of the Sinema-Tillis proposal. As bad as it is already, the chaos at the Southwest border will get much worse on December 21, when CDC orders issued under Title 42 of the U.S. Code directing the expulsion of illegal entrants in response to the Covid-19 pandemic will end.

At that point, DHS estimates that up to 18,000 migrants will cross the Southwest border illegally per day, up from an already untenable average of just fewer than 6,560 per day in October. Sinema-Tillis attempts to avoid that scenario by extending a form of Title 42 indefinitely.

The border post-Title 42 will be an unmitigated disaster, absent some rapid and unexpected shift in policy by the Biden White House. Democrats and Republicans in Congress, however, would be wise not to inadvertently make it worse by moving toward a “solution” that would trade a massive amnesty for poorly thought-out, rash, and ultimately ineffective changes that will likely just make things at the border worse.

Remember: “Shooting the hostage is definitely not a good idea in real life.”