‘Potential Terrorist’ with Links to ‘Subjects of Interest’ Apprehended in Yuma 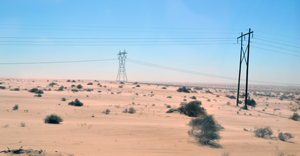 The Border Patrol in Yuma, Ariz., apprehended a Saudi national who had entered illegally on December 16. That is exceptional enough, but of even more significance are the facts that (1) he was identified as a “potential terrorist” and (2) the man “appears to have been wearing a jacket emblazoned with an American flag patch and another that stated: ‘Central Oneida County Volunteer.’"

The most recently released DHS Entry/Exit Overstay Report reveals that in FY 2019, nearly 101,000 Saudi nationals were present in the United States as nonimmigrants for business or pleasure, and an additional 91,000-plus were here as students and exchange visitors.

In other words, if you are a national of the kingdom of Saudi Arabia, it is not that hard to enter the United States legally, making the illegal entry of this individual extremely suspicious. Simply put, Saudi nationals rarely just show up in the middle of the Sonoran Desert.

It is unclear why the unidentified man was suspected of being a potential terrorist, but Fox News explained that he had links to certain “Yemeni subjects of interest”. For those unfamiliar with the goings on in the Arabian Peninsula, Yemen (directly south of Saudi Arabia on the Red Sea and Gulf of Aden) has been in the midst of a civil war since 2014, pitting a “Saudi-led coalition” against “Iranian-backed Houthi rebels”.

The Houthis are Shiites, and the rebels are in opposition to the Sunni-led government. The Trump administration had supported those Saudi-led efforts, but the Biden administration has announced an end to U.S. support for Saudi operations there.

The United Kingdom has issued a travel warning for that country, which asserts: “Terrorists are very likely to try to carry out attacks in Yemen.” The UK government identifies two main terrorist groups in that country: Al-Qaeda in the Arabian Peninsula (AQAP), “the union of al-Qaeda’s branches in Saudi Arabia and Yemen”; and “Daesh”, more commonly known as “ISIS”.

As CBS News has explained:

It was AQAP that trained the man who attempted to down a U.S. airliner on Christmas Day in 2009, with explosives sewn into his underpants. It also claimed responsibility for the 2015 attack in Paris that left 12 people dead, and an attack in Pensacola in 2019 that left three dead.

As for ISIS, it was a militant from the group’s “Khorasan” affiliate who is blamed for an attack on U.S. forces seeking to evacuate individuals from Kabul, Afghanistan, in August that killed 13 U.S. military personnel, and left at least 169 Afghans dead.

As noted, the Saudi national’s choice of attire was unique, to say the least. Pictures released on Twitter by Chris T. Clem, the chief patrol agent in Yuma sector, show that alien wearing a zip-up jacket bearing a U.S. flag on one shoulder and a patch from the “Central Oneida County Volunteer Ambulance Corps” (COCVAC) on the other: 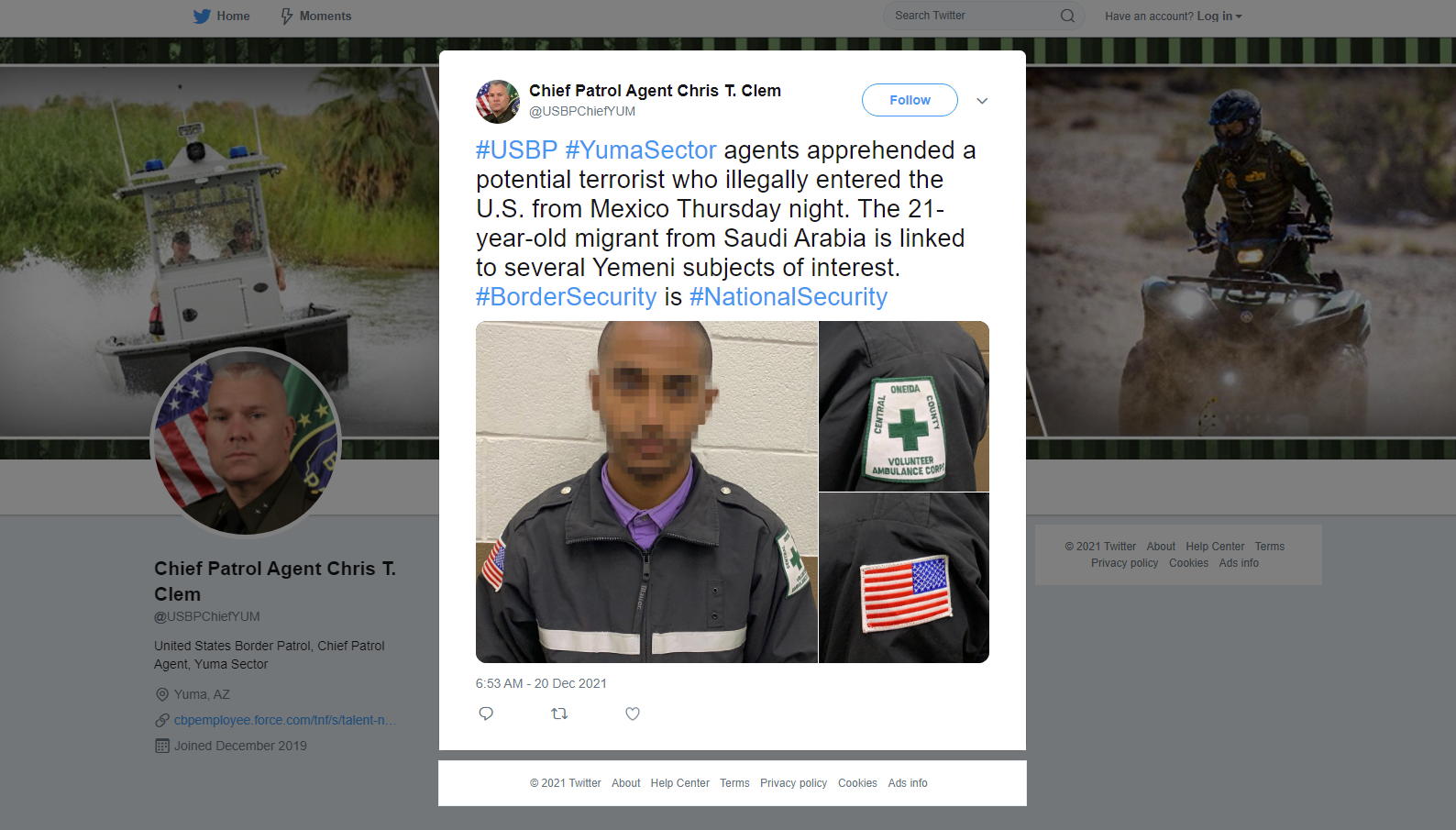 A screenshot of the tweet, which was subsequently removed.

The COCVAC’s website explains that it “is made up of over 100 valued citizens and neighbors who since 1970 have provided prompt and professional medical care in both emergency and non-emergency settings to” those in various “towns, villages, and hamlets” in upstate New York.

Fox News reports that the individual has no known ties to the COCVAC, and that the organization has explained that the jacket is “is outdated from the version the ambulance corps now uses.” Perhaps he picked it up from a thrift shop somewhere, but his possession of the garment is suspicious.

If I wanted to cross into the United States and deflect any undue attention concerning my intentions, an American flag patch on clothing identifying me as a well-meaning and civic-minded member of the community would be a great disguise.

While the incident is concerning, none of this comes as a surprise. My colleague Todd Bensman has been warning for some time that the Southwest border is vulnerable to incursions by terrorists and their supporters.

Of course, 15 of the 19 hijackers on September 11th were Saudi nationals, as was al-Qaeda founder and 9/11 mastermind Osama bin Laden. That is not to say that this makes the unidentified migrant a suspect, but the fact that he is also identified as a potential terrorist with links to subjects of interests from a country where terrorist warnings are running high is extremely troubling.

The exact relationship between the Saudi illegal migrant and those Yemenis are unclear, as are any affiliations that he may have, but this incident underscores the dangers that a border in chaos poses to the American people (both citizens and lawful aliens) and to our institutions.

Chief Clem’s Tweet notes: “#BorderSecurity is #NationalSecurity”. That is a point that both Bensman and I have made repeatedly. Perhaps this incident will be a wake-up call to those in charge of immigration enforcement that weak border policies pose a reckless and undue risk to the United States. It is not called the “Department of Homeland Security” for nothing.