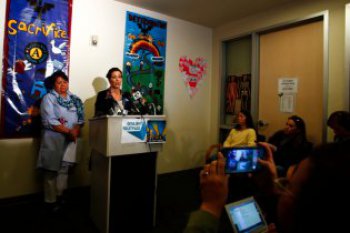 Mayor Libby Schaaf of Oakland, Calif., created a stir on February 24, 2018, when she tweeted out a statement saying that she "had learned from multiple credible sources that the [sic] U.S. Immigration and Customs Enforcement (ICE) is preparing to conduct an operation in the Bay Area, including Oakland, starting as soon as within the next 24 hours."

She continued: "As Mayor of Oakland, I am sharing this information publicly not to panic our residents but to protect them." Good luck with that.

I was previously a trial attorney with the former Immigration and Naturalization Service (INS) in its San Francisco District Office (which covered Oakland as well as two-thirds of the state), and am still in contact with several of my former operational colleagues. Interestingly, and without naming names, one of them complained that the mayor was putting agents lives at risk, a fact that it is difficult to argue with.

For example, as Attorney General Jeff Sessions and then-Secretary of Homeland Security John Kelly explained in a letter that they wrote to California Supreme Court Chief Justice Tani Cantil-Sakauye in March 2017:

Some jurisdictions, including the State of California and many of its largest counties and cities, have enacted statutes and ordinances designed to specifically prohibit or hinder ICE from enforcing immigration law by prohibiting communication with ICE and denying requests by ICE officers and agents to enter prisons and jails to make arrests. Such policies threaten public safety, rather than enhance it. As a result, ICE officers and agents are required to locate and arrest these aliens in public places, rather than in secure jail facilities where the risk of injury to the public, the alien, and the officer is significantly increased because the alien can more readily access a weapon, resist arrest, or flee. Because courthouse visitors are typically screened upon entry to search for weapons and other contraband, the safety risks for the arresting officers and persons being arrested are substantially decreased. [Emphasis added.]

Giving dangerous criminal aliens  "heads up" about impending ICE arrests enables those aliens to at best flee, but at worst prepare to respond with violent force to such arrests.

That said, however, while ICE Acting Director Thomas Homan might have viewed Schaaf's tweet more charitably. Interestingly, KQED reported that Schaaf herself had admitted:

Spreading rumors of ICE activity has been used as a tactic to strike fear and paralysis in the immigrant communities . ... This is something I thought about very carefully before bringing this information forward, but due to the reliability of my sources and the fact that I received this from multiple sources, I felt that it was my duty to share the information.

The Public Policy Institute of California (PPIC) estimates that "California [is] home to between 2.35 and 2.6 million undocumented immigrants." Alameda County, which includes Oakland, has an estimated 129,500, while the City and County of San Francisco have a combined 35,000, according to PPIC. Adding in Marin's 17,500 illegal aliens, San Mateo's 59,500, Contra Costa's 77,500, and Santa Clara's 183,500, the "Bay Area" population consists of more than a half-million aliens unlawfully present in the United States.

According to KPIX, the CBS affiliate in San Francisco, ICE actually arrested 11 aliens in Northern California on February 25, 2018, the day after Schaaf's tweet, most of whom were in Napa, Merced, and Sacramento Counties. For those of you who have never lived in California, those counties are only in the "Bay Area" under the most lenient definition of that term.

The most practical effect from an immigration-enforcement standpoint of Schaaf's tweet was to put 500,000 illegal aliens on notice that ICE might arrest them, sowing the sort of fear that she herself had warned about. It would be difficult for the agency to buy such publicity. In fact, Homan may want to delegate an official snitch to the Oakland mayor's office to tell her honor about the "new big immigration raid" that is perpetually right around the corner.

This single tweet exemplifies all of the problems with the so-called "sanctuary movement" in California. It is not ICE that the 500,000 illegal aliens in the San Francisco Bay Area fear, so much as it is their own illegal status. California can (and has) passed any number of laws to inhibit ICE operations. What it cannot do is provide those aliens the legal status required to avoid an immigration arrest.

Ironically, California's actions make it that much more difficult for Congress, which does have the ability to grant such status, to do so for some or all of that population. California has two senators, which means that it has one-fiftieth of the influence in the United States Senate. Given the fact that the only thing that distinguishes one senator from another is seniority, and the fact that the California Democratic Party recently refused to endorse the state's senior senator, Dianne Feinstein, for reelection (in part, according to ABC News, because she "hasn't stood strong enough for immigrants"), California risks putting itself further behind Mississippi, Iowa, Kentucky, and Alabama on that score as well.

The remaining states of the Union (or at least most of the 30 states carried by Donald Trump in the 2016 election) are unlikely to want their immigration policies controlled by Sacramento's fiats, a fact that Schaaf's tweet only exacerbates. For example, even if the average voter in, say, Nebraska, believes that DACA beneficiaries should be allowed to remain in the United States indefinitely, that same voter is probably repulsed by an elected official who uses her office to directly interfere with legitimate law enforcement activities that voter is paying for.

Senators and representatives in Washington, D.C., understand this, making consensus on how to handle those DACA beneficiaries all the more difficult. To explain: Imagine that the Senate is considering legislation based on President Trump's "four pillars" for DACA relief, including border wall funding. As the Sacramento Bee has reported, however, California Attorney General Xavier Becerra filed suit on September 22, 1017, "to prevent construction of a U.S.-Mexico border wall in San Diego and Imperial counties" under current law. Given the California state government's immigration-resistance posture, no senator could seriously believe that Becerra would not sue again to block border improvements in a DACA bill as well.

Similarly, absent a provision that bars or weakens sanctuary policies, every senator would know that California will gladly accept its share of the DACA amnesty while continuing to block immigration enforcement with respect to the rest of its illegal population at every turn.

Just as in 1986, under these scenarios aliens would get amnesty, but the country would not get the promised enforcement, or at least not without a costly legal battle. Good will on legislation is a two-way street, and when it is apparent that one of the parties won't comply, passage is impossible. If there is no DACA fix, California will only have itself to blame.