Senator objects: “We can’t fix the problem unless we acknowledge it” 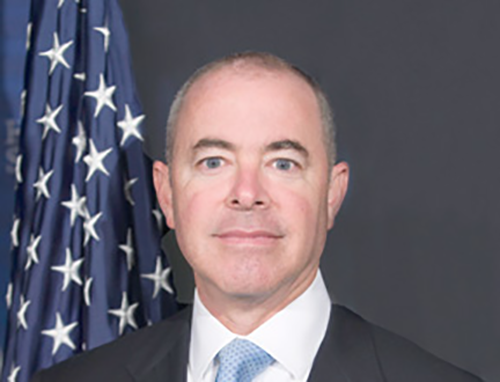 DHS Secretary Alejandro Mayorkas appeared before the Senate Homeland Security and Government Affairs Committee this week at a hearing on “Threats to the Homeland”. Under questioning from Sen. Rob Portman (R-Ohio), Mayorkas denied there was a crisis at the Southwest border and blamed the entire Western Hemisphere for what’s happening there. As Portman explained, however, there is a crisis at the border, and “We can’t fix the problem unless we acknowledge it”.

Portman’s Borrowed Questions. Shrewdly, Portman opted to use his five minutes of time to ask Mayorkas the same questions Border Patrol Chief Raul Ortiz was asked in a deposition by the Florida Attorney General’s office in late July.

To summarize his responses, Chief Ortiz admitted that the president's border policies impose “no consequences” on migrants traveling into the United States illegally and are to blame for the unprecedented surge at the border and the release of hundreds of thousands into the interior of the country.

Florida’s questioning started more simply, however: “Would you agree, Chief Ortiz, that the southern border is currently in crisis?” Ortiz’s answer was equally simple: “Yes.”

That’s where Portman began, as well, with the senator asking the secretary, “is the southern border currently in crisis? Yes or no?” Mayorkas’ response was not quite as succinct as Ortiz’s, however:

True in Part, But Not Responsive. There are some true facts in Mayorkas’ answer, but he did not respond to the question. Large numbers of Venezuelans have left that South American country in response to the destruction wrought by more than two decades of socialist misgovernance there, which has turned it from “the wealthiest country in South America into an economic basket case”.

Notably, however, of the 2.2 million-plus illegal migrants apprehended by Border Patrol agents at the Southwest border in FY 2022, fewer than 188,000—about 8.5 percent—were from Venezuela. That means that 91.5 percent weren’t.

U.S. Responsibilities Under International Law. More importantly, however, Mayorkas’ example underscores an important point that has largely been elided by the Biden administration. Colombia—a signatory to the UN’s 1951 Refugee Convention—is right next door to Venezuela and thus bears the burden of “hosting” Venezuelan refugees.

The United States acceded to that convention, too, in 1968, and therefore has agreed to provide protection subject to the terms of the “Convention and Protocol Relating to the Status of Refugees”. Here’s what the United States agreed to under Article 31, paragraph 1 of that document:

The Contracting States shall not impose penalties, on account of their illegal entry or presence, on refugees who, coming directly from a territory where their life or freedom was threatened in the sense of article 1, enter or are present in their territory without authorization, provided they present themselves without delay to the authorities and show good cause for their illegal entry or presence.[Emphasis added.]

Under Article 31, the United States agreed to protect foreign nationals fleeing persecution who are “coming directly” here. Thus, if a Venezuelan boards a plane in Caracas and lands at JFK or Dulles, that individual is covered by our accession to the convention, in much the same way as the same individual would be protected if he or she crossed the Venezuelan border into Colombia.

Except for Mexican nationals and those third-country nationals firmly resettled and fleeing persecution in Mexico, however, none of the aliens who are crossing the Southwest border illegally are “coming directly” from territories. Our international agreement doesn’t apply to them at all.

Biden’s Underutilization of Expedited Removal. That said, such a “third-country transit” exception was not included in U.S. law when Congress drafted the asylum provision at section 208 of the Immigration and Nationality Act (INA). That section, instead, allows any alien claiming protection to seek asylum here, regardless of whether they came directly or not.

That’s not the end of the issue, however, because the INA also enables DHS to quickly deport aliens who have entered illegally under the “expedited removal” provision in section 235.

To comply with section 208 of the INA and the Refugee Convention, section 235 directs DHS to refer all aliens in expedited removal who are requesting asylum or claiming a fear of harm if returned home to USCIS asylum officers for a “credible fear” interview.

Credible fear is a screening standard, and thus intended to assess whether an alien may be eligible for asylum. Not every illegal migrant comes seeking asylum, however. In fact, prior to FY 2013 fewer than 10 percent of aliens subject to expedited removal claimed credible fear, and in FY 2018, fewer than half—42 percent—did.

“Credible fear” is a loophole Congress must close, but until that happens, DHS could quickly remove about half of all illegal migrants if it were to robustly utilize expedited removal.

Under the Biden administration, however, not only hasn’t DHS “robustly” utilized expedited removal, it hasn’t even done so tepidly. As I recently explained, “Of the 2.2 million-plus illegal entrants apprehended by Border Patrol at the Southwest border in FY 2022, fewer than 111,000 — just over five percent — were placed into expedited removal.”

To be fair, about 48 percent of the illegal entrants apprehended at the Southwest border in FY 2022 were expelled under CDC orders issued pursuant to Title 42 of the U.S. Code in response to the Covid-19 pandemic. But that still left more than one million illegal migrants who weren’t expelled under Title 42 and who could have been subject to expedited removal, but weren’t.

Instead, nearly 690,000 of them were released by Border Patrol into the United States in FY 2022, and an untold number of others were handed by CBP over to ICE, which then released them. Those aliens are here indefinitely, if not forever, regardless of whether they are granted asylum or not.

Chief Ortiz understands that those releases, and not some “migration crisis” that “the entire hemisphere” is suffering from, are the reason there’s a crisis at the Southwest border.

During the Florida deposition, he was asked: “Why is it important to detain and remove demographics that are amenable to the Border Patrol?” His answer: “One, you want to make sure you have consequences.”

That prompted the question, “[I]f you don't have consequences, what is likely going to happen?” Chief Ortiz responded, “In my experiences . . . we have seen increases when there are no consequences.” The border is a disaster today because there have been no consequences for illegal entry under Biden, save the possibility of expulsion under Title 42.

The problem is that Title 42 is scheduled to end on December 21, and after it’s gone, DHS expects that up to 18,000 aliens per day will pour over the Southwest border illegally—nearly three times as many as under the current untenable rate, and about 18 times Border Patrol’s limited capacity to handle the flow.

While there have been some minor indications that the Biden administration may be shifting in its border policies, there is no evidence of a large-scale shift in its “catch-and-release” regime. Until there is, there will be no consequences for illegal entrants and the crisis will continue.

Mayorkas Denies There’s a “Crisis” at the Border. Except, according to Mayorkas, there is no “crisis” at the border that would require such a paradigm shift in the White House’s approach to the border.

Understand that Portman is the consummate gentleman, and largely unflappable (a trait he likely honed as U.S. Trade Representative under the George W. Bush administration), but he had reached the end of rope at that point: “Okay. Chief Ortiz stated yes. Just so, you know, he said the obvious, which is yes.”

Following up on that point thereafter, and likely reflecting the sentiments of tens of millions of Americans, the senator from Ohio made clear that: