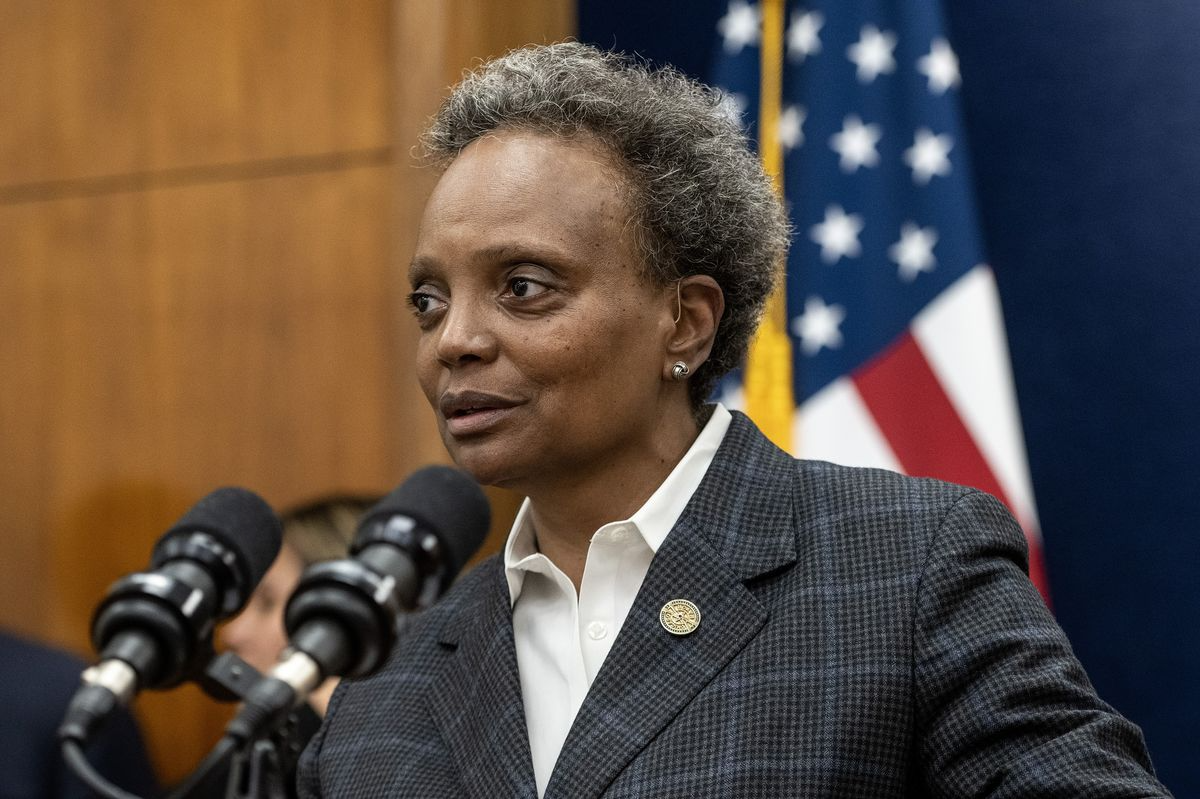 The Chicago Tribune reports that Mayor Lori Lightfoot (D) is asking the state of Illinois for $53.5 million to provide services to migrants in her city. The state has responded, explaining it’s already spent $120 million on the effort and its “agencies ‘have exhausted all available fiscal resources for the operation of the asylum seeker mission’”. The “City of Big Shoulders” apparently can’t shoulder much more, but Lightfoot should be asking her fellow Democrat in the White House to nip the migrant crisis in the bud by filling empty ICE detention beds — as Congress has directed.

Chicago’s Migrant Crisis — and El Paso’s. The Tribune reports that Chicago “has seen an uptick in migrants from Haiti, Cuba, Nicaragua and various African countries”, while the mayor places at least some of the blame on Texas Governor Greg Abbott (R), who has been transporting migrants released in his state north.

Texas has bused just fewer than 3,900 migrants who were released by DHS to Chicago, a fraction of the 16,500-plus the state has sent out since the spring of 2022. By comparison, Washington, D.C. has received about 9,000 migrants, and New York City more than 5,100. Philadelphia, a more recent destination, has welcomed more than 840.

According to the Tribune, Chicago is caring for 1,531 migrants, and has had to set up “11 alternate shelters that provide meals, clothing and showers”. I’ll return to that point, below.

Abbott’s busing scheme has been dismissed as “political theater”, but such complaints ignore the fact that it is rooted in an effort to relieve the burden President Biden’s feckless immigration policies have imposed on Texas’ Southwest border cities and towns.

One of those cities is El Paso, which is currently under a state of emergency due to the massive numbers of migrants DHS is releasing onto its streets. That city, the largest on the Southwest border, is making plans to shelter up to 10,000 more once CDC orders issued under Title 42 of the U.S. Code, directing the expulsion of illegal entrants to stem the introduction and spread of Covid-19, end (on a date TBD).

Chicago, with a population of nearly 2.8 million, is plainly struggling to keep up with its migrant flow, but what about it’s fellow liberal enclave El Paso, which has less than a quarter of Chicago’s population and an inability to estimate, day-to-day, how many new arrivals it will have to deal with?

Illinois and Texas. For what it’s worth, if Illinois has “exhausted” its “available fiscal resources” to deal with migrants, what could be said about Texas?

One source reports that Illinois has “spent or committed to an estimated $116.4” million on what it terms “the asylum seeker emergency response”.

Of that total, $8 million is for “interim housing”, $3.9 million for “health screenings”, $29.4 million “for hotel, transportation and housing costs”, $13.5 million for “DHS provided assistance (legal, rental, shelters)”, and a whopping $61.6 million has been paid or committed to “contracted staff who provided on site case management and other services at multiple locations including management for both city and state operations”.

That’s a lot of money, but keep in mind Texas will spend about $3 billion on border security alone in 2022 and 2023, according to estimates from the Texas Public Policy Foundation (TPPF). That’s 3.5 times Texas’ expenditures for such activities just five years ago, and more than 12.5 times what Illinois has placed itself on the hook for.

Of course, Texas must deal with more than just an “asylum seeker emergency response”. There are cartels, organized smuggling organizations, and God knows who else along the Rio Grande seeking to exploit overwhelmed Border Patrol agents on this side of the river to move drugs, terrorists, criminals, and thousands of migrants on a daily basis through Texas and into the United States.

Texas has taken it upon itself to backfill those Border Patrol agents with National Guard troops and Department of Public Safety officers, through “Operation Lone Star”. TPPF explains that “While Operation Lone star is unable to cover all the gaps created by the federal government, it has filled gaps left open by the federal government’s mismanagement of border security”.

Detention’s a Better Idea — and the One Congress Has Mandated. Note that none of the migrant-related activities undertaken by either Illinois or Texas — the housing and transportation, the health screenings, the legal assistance, the “meals, clothing, and showers”, the patrolling of the international border by state troopers or National Guard troops, etc. — is a “state” responsibility. They’re all the federal government’s job.

Which the federal government either isn’t doing or is failing to do. That is not because our immigration system is “broken”, as DHS Secretary Alejandro Mayorkas asserted — in El Paso — in December.

Consider the source. It is Mayorkas’ responsibility — spelled out in federal law — "to achieve and maintain operational control over the entire international land and maritime borders of the United States”. Which, of course, he hasn’t done, instead blaming the “broken” asylum and immigration systems.

Neither of those systems is broken. Rather, Biden and Mayorkas has been fighting state efforts in federal court for the better part of two years to force them to operate those systems as Congress intended.

In the case of asylum and the border, that means detaining aliens who are apprehended entering illegally — from the moment they are caught until they’re either granted asylum or removed. The detention of illegal migrants isn’t some legislative “suggestion” — it’s a congressional mandate.

You wouldn’t know that from the administration’s response. On January 3, Fox News reported that even though Congress gave ICE funding for 34,000 detention beds (per day) in its FY 2022 budget, the agency detained on average just 22,630 aliens last fiscal year — even as agents at the Southwest border apprehended more than 2.2 million illegal entrants (an all-time high, and it wasn’t even close).

Detentions and illegal entries are not simply tangentially related — they are intrinsically intertwined, and as detentions rise, entries fall.

That’s what happened when, in lieu of detention but pursuant to congressional authority, the Trump administration implemented the Migrant Protection Protocols (MPP), better known as “Remain in Mexico”.

MPP allowed DHS to send non-Mexican aliens who had entered illegally and claimed a fear of return back across the border to await their asylum hearings.

As DHS determined in its October 2019 assessment of the program, “aliens without meritorious” asylum claims — “which no longer constitute[d] a free ticket into the United States” — started voluntarily going home once MPP was implemented.

Detaining illegal migrants — which again the law requires — works the same way. It denies aliens who have entered illegally a “free ticket” to live and work in the United States indefinitely (if not forever) simply by asking for asylum.

Even better, once those “asylum seekers” are in ICE custody, the federal government pays the cost for providing not just housing, but also those “meals, clothing and showers” Mayor Lightfoot needs cash for. Medical care, too. And for those alien children in ICE custody, the agency also provides education and educational supplies.

For those who complain that detaining “asylum seekers” isn’t “humane”, consider the alternatives. The basis of every asylum claim is that the applicant is in fear of his or her life back home. ICE provides the ultimate protection, overseen by Congress itself, as well as by any number of governmental and NGO watchdogs.

And by eliminating the undeniably clear incentives for entering illegally and filing a bogus asylum claim, detention makes it less likely that hundreds of thousands of aliens will risk physical and sexual assault, extortion, and death at the hands of what then-Vice President Joe Biden described in 2014 as “very dangerous, not-nice, human-smuggling networks”.

The border and immigration enforcement are federal responsibilities, but DHS has been shirking them ever since Biden took office. If the president won’t listen to Governor Abbott, perhaps he will listen to Mayor Lightfoot, who should tell both Biden and Mayorkas to stop making excuses and start doing their jobs. Non-enforcement isn’t cheap.