Fentanyl and semi-autos and a stun gun, oh my! Plus, a panga with tons of meth 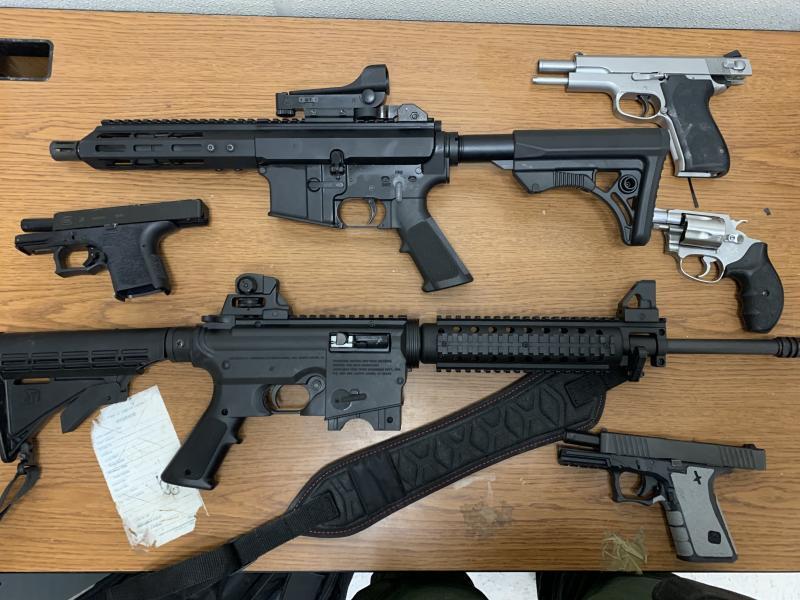 Last Thursday, Border Patrol agents working at the Highway 86 Checkpoint near Salton, Calif., stopped a Honda CRV after a K-9 alert. That is one good doggy — he or she hit the jackpot, as agents discovered weapons, drugs, and two suspects (one with active warrants — and not for your garden-variety offenses).

First, the drugs. Agents recovered 1.36 grams of fentanyl. The street value was just $136, but given that two milligrams of the drug is a lethal dose, that is enough to kill 680 people — or simply poison any number of communities. It just shows how cheap that deadly drug (and human life itself) has become.

Second, the guns. The vehicle contained a mini armory, consisting of two rifles, three semi-automatic handguns, and a revolver, as well as assorted ammunition. I am a strong believer in the Second Amendment, but lest you posit that the duo were doing their part to ensure a "well-regulated militia", four of the guns had no serial numbers (suggesting that they had been illegally removed to preclude tracing), and one had been reported stolen. Likely not Cabela's purchases.

And third, firearms were not the only weapons on board. The CRV also carried a hatchet, as well as what was described as "a collapsible steel baton", a stun gun, and one wooden bat, to boot. In toto, this contraband is enough to suggest that one or both were up to no good.

Fourth, the occupants. Normally, I only write about aliens, but in this case, the two were both U.S. citizens — a 42-year-old man and a 41-year-old woman.

After they were taken into custody, agents discovered that the female had two active warrants: one for a hit and run (with property damage), and one "for taking forbidden articles into a prison". On the latter charge, she was either actually arrested in the course of that smuggling, released, and absconded from her court date, or her offense was discovered after the fact. Given the fact that she was wanted for hit-and-run, my money is on the latter (because she would not want to face another charge), but both are pretty serious.

No warrants were listed for the male, but he should likely be choosier in the future on his choice of company. Or she should: each, unsurprisingly, disclaimed any ownership of the weapons.

As both were citizens, I would usually pass on commenting on this incident. Coming on the heels of my post last Tuesday on suspected smugglers who dropped AK-47 magazines and 740 rounds of 7.62 ammo on their way out of the United States, however, this case underscores the dangers that Border Patrol agents face every day.

Speaking of drugs, though, last Wednesday, Border Patrol and ICE HSI agents, together with the CBP San Diego Air and Marine Branch and Santa Barbara County Sheriff's Office employees, worked to apprehend what was described as a "super-panga" containing thousands of pounds of suspected methamphetamine, and arrest numerous suspects.

For those not familiar, a panga is a term commonly used to describe a small open fishing boat with an outboard motor. (The term is also used for a style of machete and a variety of catfish.) Boating magazine has described it as "the boat that changed the world", and while those involved in this incident likely did not have such lofty goals, tons of meth would likely have changed, or degraded, any number of cities and towns. This panga was described as a "multi-engine", so it was likely designed for such large loads.

It is not clear whether this was the same panga and load that was described in a VC Star article detailing a seizure of a boat off of Arroyo Quemada Beach with a massive amount of meth on the same night, but I really hope that they are not seeing a lot of such illicit traffic. The outlet reported that combined law-enforcement agents (including from CBP) seized 3,164 pounds of methamphetamine from that 40-foot panga — which was powered by three outboards — and arrested a total of 33 individuals, including 30 adults and three juveniles.

Their nationalities were not listed by either CBP or the VC Star, but the latter stated that the "boat originated from Mexico", so I have my guesses about at least some of those involved (CBP stated that the boat had "four subjects on board"). Arroyo Quemada Beach is a more than 250-mile drive north from the closest border city (Tijuana, Baja California, Mexico), and not a lot less by water, so this was a complex endeavor in an open boat.

Just not a successful one, thanks to the sorts of cooperation between DHS and local law enforcement that many decry. Those opponents of DHS enforcement, however, have been fairly quiet, thus far, on this one.