At the Border, One Exciting Rescue, and Six Critical Ones

In summary: 'Splash' is a verb, and smugglers are evil 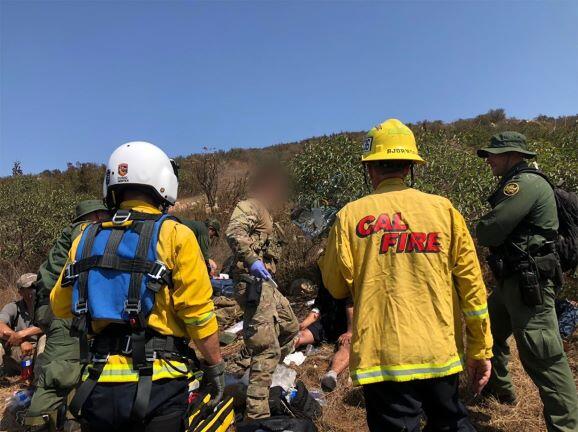 The latest press releases from CBP reveal the usual mix of life-saving heroics on the part of the Border Patrol. One of those rescues reads like it is out of a Schwarzenegger flick, while six others simply reflect everyday dangers at the border. Each merits mention.

Late on Sunday night, Texas Department of Public Safety (DPS) officers attempted to a stop a Toyota Camry on U.S. Highway 83 in El Cenizo (a border town just south of Laredo). The driver kept going, and DPS gave chase. Border Patrol agents from Laredo Sector and CBP Air and Marine Operations (AMO) responded to their calls for assistance, and AMO kept surveillance of the vehicle.

As CBP explains, the Camry "splashed into the Rio Grande River". For those who don't spend much time around the Border Patrol, "splash" in this instance is a verb, made so because vehicular escapes into the Rio Grande are so common. The driver swam to Mexico, leaving four Guatemalan nationals (each of whom was unlawfully present) stuck in the Toyota.

The car started sinking, and the four scrambled onto the roof as it submerged. Border Patrol Search, Trauma, and Rescue (BORSTAR) agents, along with line and Mobile Response Team agents, scrambled to the scene, and fished them out. BORSTAR agents then checked the now sunk vehicle to ensure that there were no other passengers — including in the trunk. Fortunately, they did not find any.

The four were checked out and taken into custody. The cowardly coyote got away.

On the other end of the border, in San Diego County, the issue was not drowning, but soaring temperatures, starting on Friday afternoon when Border Patrol agents spotted a fire near Dulzura, Calif. They called CAL FIRE, and went to check it out. Agents discovered a Mexican national in distress, who had started the blaze after he got lost and began suffering from the high temperatures in the area. CAL FIRE put out the blaze and airlifted him to safety, and Border Patrol took him into custody (he was illegally present) thereafter.

On Sunday afternoon in the same general area, agents responded to a distress call. They found two Mexican nationals — both illegally present — in a ravine, unable to walk. They were airlifted to an EMT, who determined that they were suffering from heat-related illnesses. They were transported to the hospital for treatment.

Sunday evening, BORSTAR agents from San Diego Sector went looking for a missing individual near Jamul, Calif. They found the man, again an illegally present Mexican national, again suffering from heat-related injuries. The BORSTAR agents airlifted him to Brown Field Airport, and after being medically cleared, he also was taken into custody.

Those were eight of 14 individuals who were rescued in the sector over the long, hot Labor Day weekend. Eight were treated for ailments resulting from the heat, one had gotten bitten by a snake, and one had kidney failure. As the Chief Patrol agent noted: "Migrants often become lost, injured, and abandoned by smugglers who only see them as commodities for exploitation." Proof positive.

Just east, in El Centro Sector, agents responded to a 911 call on Saturday west of Calexico in the Yuha Desert, and discovered an older Mexican male (an illegal reentrant) and a 12-year-old Ecuadorean boy (illegally present, who had fainted from the heat) about 80 minutes later. They were given water at the scene and transported to the hospital.

The boy had gotten separated from his mother (who was had also apprehended, earlier), and the two were reunited in the El Centro Station. After they were treated, they were expelled under Title 42, while the Mexican national was referred for prosecution.

On Sunday evening, Calexico Police received a 911 call from three Mexican nationals who had fallen into distress after entering illegally west of town. Border Patrol found them 20 minutes later, and they were taken into custody after being medically cleared, and expelled.

Later that night, agents at El Centro station received word that an individual was lost and in distress in the mountains of the Jacumba Wilderness near Ocotillo. The Mountain Disrupt Unit (MDU) and BORSTAR agents joined the search, along with officers from San Diego County Sheriff's Department air support unit.

After midnight, the Sheriff's Department told BORSTAR that they had observed a fire near the area of the search. MDU responded and located the individual, an illegal alien from Mexico. He had started the fire to draw attention. The man was medically cleared and expelled.

One weekend, seven rescues, 14 lives saved by Border Patrol agents. All in the line of duty. I could go on (50 were rescued in Tucson Sector and 12 Mexican, Honduran, and Guatemalan males were saved over the weekend, for example), but you get the point.