Does the American Passport Really Have 'Declining Power'? 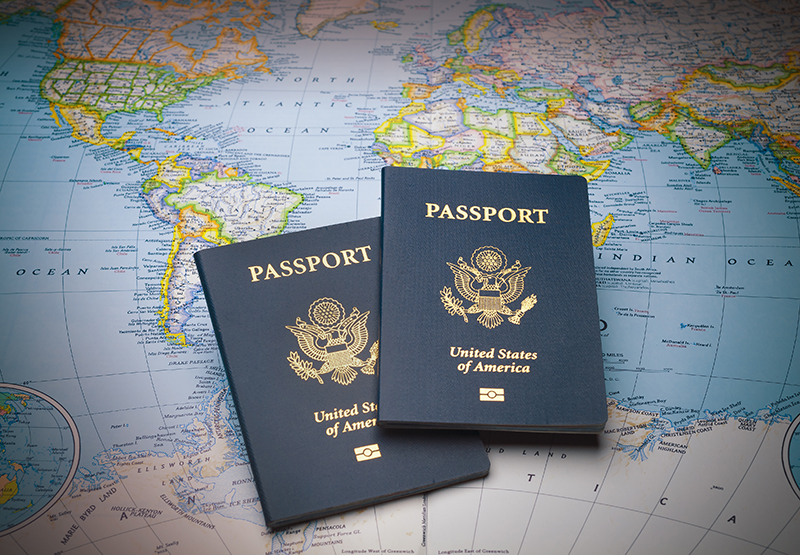 The Atlantic posted an article with the provocative title "The Declining Power of the American Passport: U.S. citizens are finally confronting the randomness that travel and immigration are built on". The subheader basically summarizes the whole article, written by one Prashant Rao, who is identified as "a senior editor at" the periodical, "where he oversees the Global section." I assume that it is reporting, but it comes across as an opinion piece. But, it is a questionable one, at that, beginning with the headlines.

Travel around the world, including into and out of the United States, has been severely impeded by the global response to the Wuhan coronavirus.

The CDC notes that, in an effort to respond to the spread of the pandemic, certain foreign nationals who have been in 34 specified countries in the past 14 days are barred from entering the United States.

Many are countries that are commonly visited by Americans (with the means to do so) during what is considered the summer travel season, including the UK, Ireland, France, Germany, and Spain. Others are slightly less heavily visited, in particular the Islamic Republic of Iran and the People's Republic of China.

Nationals of almost all of those countries are commonly visitors to American cities and parks (both national and amusement) year-round, as well.

The nationals of 30 of those countries are, in usual circumstances, covered by the Visa Waiver Program (VWP), which enables them to travel to this country for 90 days or less for business or tourism without a visa. Again, these are not usual times, so those foreign nationals are barred from entry if they are coming to the United States from home.

Twenty-six of those VWP countries are in the so-called "Schengen zone", mostly composed of members of the European Union (four Schengen countries are not in the EU), that have few if any border restrictions among them. At the end of June, the EU announced that non-essential travel into its member states could resume for 14 nations-- not including the United States.

Notably, however, AP reported: "The EU said China is 'subject to confirmation of reciprocity,' meaning Beijing should lift all restrictions on European citizens entering China before European countries will allow Chinese citizens back in." I will explain why that is notable below.

The United States has also reached agreements with Mexico and Canada "to limit all non-essential travel across borders", suspending tourism and recreational travel by Americans to those countries, and by Mexicans and Canadians to the United States. "Essential" commerce, trade, and travel is not restricted under those agreements. Again, those are popular tourist destinations—Canada more in the summer months, while travel by Americans to Mexico is a year-round endeavor.

Note that Canada is pretty locked down generally, and even those few foreign nationals who are exempt from its travel restrictions must still have a 14-day quarantine plan.

Similarly, Australia "has in place strict measures aimed at protecting Australians and visitors to [the] country from the coronavirus." Specifically: "At the current time, only Australian citizens, residents and immediate family members are permitted to travel to Australia", and those travelers who are allowed to enter are subject to a 14-day quarantine. Significantly: "Australians are restricted from travelling overseas."

Those hoping for antipodal travel should avoid New Zealand as well: "The New Zealand border is currently closed to almost all travelers wanting to travel to New Zealand by either air or sea." Unlike Australia, there do not appear to be any impediments to New Zealanders leaving the country, though.

All of which brings me back to the article in The Atlantic. Mr. Rao, who identifies himself as a citizen of India, largely spends eight of the 13 paragraphs therein explaining the difficulties that he has experienced travelling on his passport. In one of his more generalized passages, the paragraph that is really key to his points, he asserts:

There is an inherent randomness—some would reasonably call it unfairness—in how the world enforces the idiosyncrasies of travel and immigration. Through circumstance, you are born in a place, and the history and the policies of that place will, for the majority of humanity, forever determine whether, to where, and for how long you can leave.

Some of the arguments that he makes therein are true, most are not, but he ultimately misses the point.

There is not an "inherent randomness" in the global enforcement of "travel and immigration." It is actually administered through well-reasoned principles, most deeply rooted in the INA (as it relates to travel to the United States) and diplomatic principles (globally).

Remember the VWP, which I referenced above? It is governed by section 217 of the Immigration and Nationality Act (INA). To be in the VWP, a nation must have a low nonimmigrant visa refusal rate and issue a machine-readable passport. The Attorney General, Secretary of DHS, and the Secretary of State must also conclude that the designation of that country would not compromise the law-enforcement or national security interests of the United States. And, the nation must extend reciprocal privileges to the United States.

Reciprocity is a big deal as it relates to international travel, as the reference above to the EU and entry thereto by nationals of the People's Republic of China demonstrates. Fees for nonimmigrant visas to the United States differ with respect to the various countries whose nationals require visas based upon the fees those countries charge U.S. citizens for similar types of visas. The same is true of the period of validity of those visas.

In fact, in EO 13780, President Trump directed the State Department to "review all nonimmigrant visa reciprocity agreements and arrangements to ensure that they are, with respect to each visa classification, truly reciprocal insofar as practicable with respect to validity period and fees . . . and other treatment."

And, with due respect to Mr. Rao, as it relates to the United States at least, the place of your birth, its history, and policies will not "forever determine whether, to where, and for how long you can leave." Any foreign national who meets the requirements of the INA can become a lawful permanent resident, and ultimately thereafter naturalize. Some 834,000 aliens did just that in FY 2019. And, I would tell the new citizens whom I had just sworn in to apply as soon as possible for a passport – with all of the benefits it conveys.

That said, certain parts of the article veer into the petty and inane. For example, after noting in sneering terms that foreign travel for Americans is restricted as a result of the pandemic ("Before the pandemic, more than 100 countries were willing to admit Americans; now, by one count, fewer than three dozen countries want you" (emphasis added)), Mr. Rao states:

After the pandemic, travel may well return to some measure of normal. Perhaps Americans will be welcomed back to countries all over the world that are keen to court tourists who will help rebuild their struggling economies. Despite the slight schadenfreude I feel watching Americans contend with the new world-traveling order, I hope that you can one day travel with ease, because the status quo is painful.

For those not familiar, "Schadenfreude" in German means (more or less) "malicious joy". I am not sure what the exact etymology of the word is (schaden is an intransitive verb meaning "to harm", schade is an adjective meaning "shame" or "pity", and Freude is a noun meaning "joy"), but as an idiom its meaning is clear: taking joy in another's misfortune. Perhaps it has simply been appropriated into English – schade in and of itself.

Its usage in the referenced passage, however, suggests that the last two clauses therein are somewhat less than sincere.

Nor is a U.S. passport the golden ticket Mr. Rao suggests it is. Notwithstanding my presentation of that document, I have been sent to hard secondary inspection at Ottawa International (on a trip paid for by the Canadian government, no less); been patted down and swiped numerous times for a half hour during one trip through Heathrow (likely, I believe, because I stepped in merde de chien in Paris); had my luggage thrown open (and my underwear thoroughly probed) at Lynden Pindling International in the Bahamas; and been grumbled at in in Portuguese for several minutes in Lisbon (on a domestic flight, after I presented my official U.S. government passport, and I still have no idea what that official wanted).

In fact, the U.S. passport is not even the "most powerful" in the world, at least according to U.S. News & World Report. A Japanese or Singaporean passport will get you into 190 countries visa-free. German "Reisepässe" share the number two ranking with travel documents issued by South Korea and Finland (188 countries). U.S. passports come in number six (184 countries under normal conditions), a ranking it shares with seven other countries (including the UK).

The Atlantic article concludes, somewhat pessimistically, with the following:

Mr. Rao, however, never offers any reason why U.S. passports would become documentae non gratae – again, aside from his own pique – but it is all but definitely not likely to happen.

In my experience, Americans (and their money) are largely welcomed around the world, and it is in the interest of most foreign countries to open their doors to U.S. citizens. Maintaining good relations with the world's greatest superpower is smart diplomacy, and closing your doors to U.S. passports will likely mean closing off educational and economic opportunities to your own citizens.

I would prefer to believe that most of the world likes Americans generally, but I am not so naïve to think that any foreign country would allow visa-free travel to those carrying U.S. passports out of the kindness of its collective heart. The pandemic has hit the world's economy hard (the World Bank describes it as "the largest economic shock the world has experienced in decades"), and every country will need capital to dig itself out. The United States is the world's richest country (controlling 23.8 percent of the global GDP, much more than Germany, Japan, and the UK combined, and far more than China), and its people are where those countries will come looking first.

Immigration, both in the United States and around the world, is not the random and disorderly process that Mr. Rao would have you believe (and as he may believe himself). For the reasons above, "The Declining Power of the American Passport" is not an apt headline at all.

We may be stuck at home now, but not for long and certainly not forever. To borrow a line from "Cabaret": "Money makes the world go around". And soon, money (and diplomacy) will allow you to travel round it.