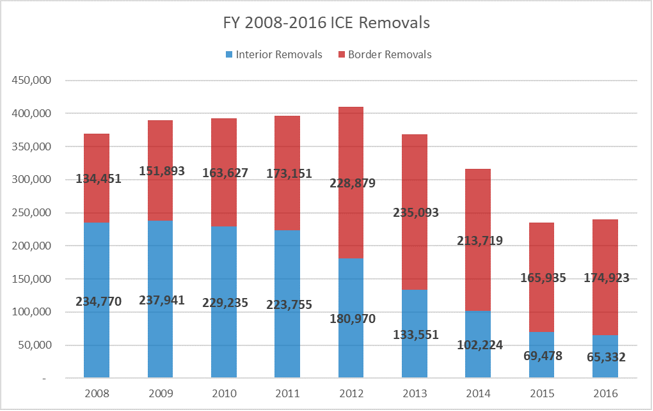 The most important statistic to track on this figure is the removals by ICE from the interior of the United States, which are marked in blue. These are aliens who are identified, apprehended, and removed by ICE from within the United States. The portion of the figure in red, on the other hand, represents aliens who were apprehended by U.S. Customs and Border Protection (CBP), either at the ports of entry or along the border, and handed over to ICE for removal.

The importance of interior removals to effective immigration enforcement was explained by my colleague Jessica Vaughan in October 2013:

Americans understand that immigration enforcement in the interior is vital to the rule of law, preventing illegal employment, public safety, and national security. Experts estimate that about 60 percent of the approximately 11.7 illegal aliens who are residing here originally entered the country by illegally crossing a land border, and about 40 percent were admitted through an official port of entry and overstayed their visa or authorized admission. Most illegal aliens do not live in the border region; they are dispersed throughout the nation. Besides the seven million or so aliens who are working illegally, there are more than one million removable criminal aliens who are at large in U.S. communities as a result of release from jail or prison, or after having re-entered illegally after deportation.

If the interior removal numbers fell so dramatically, how did Barack Obama come to be known as the "deporter-in-chief"? By artificially inflating the number of removals by including removals from the border. As the Miami Herald reported:

[I]n 2014, Secretary of Homeland Security Jeh Johnson told Congress that figures tied to [ICE] that indicated a record of deportations under Obama were really not deportations, but quick turn-backs at the border of immigrants detained at or near the boundary line and then sent back to Mexico without a formal deportation process or order.

The number of removals attributed to the Trump administration for FY 2017 will be lower, because the number of aliens apprehended attempting entry into the United States at the border has fallen dramatically from FY 2016, when 174,923 aliens were removed from the border.

Two categories of aliens are included in the number of border removals: aliens apprehended by U.S. Border Patrol (USBP) while, or directly after, entering the United States illegally; and aliens deemed inadmissible by Customs and Border Protection Officers at the ports of entry. CBP saw a drop in the number of apprehensions and inadmissibles in FY 2017 from a high of 66,712 in October 2016 (the month before the presidential election) to a low of 15,771 aliens in April 2017.

The number of removals from the interior, however, is likely to increase, but not enough to offset the decrease in the number of aliens deported after attempting illegal entry. The Washington Post reported in September that between January 22 and September 9, 2017, "officials deported nearly 54,000 immigrants from the interior, a 34 percent increase over the same period last year," and that alien "arrests ... are up more than 40 percent this year." These numbers are incomplete, because they do not include the number of interior removals for the better part of the first four months of the fiscal year, or for the last three weeks of FY 2017. The year-to-year increase, however, strongly suggests that interior removals will be up significantly in FY 2017.

Critics of the president's immigration policies seem to want to argue that those policies are both too harsh and at the same time ineffective. A fuller picture of whether those policies have been successful or not will be available in December when the Department of Homeland Security releases its full statistics for FY 2017. Given the fact that the president's policies appear to have both dissuaded aliens from entering the United States illegally, and at the same time increased the number of removals from the interior, however, there is room for hope for their ultimate success.